Set in the South, the film follows Nick Brenner (Grimes), a guy who has settled down to try to live a quiet life believing he has finally escaped his violent, troubled past. He lives in a small home with his wife Tara (Marguerite Moreau) and has a job a small furniture restoration factory alongside his friend Sal (James Badge Dale), whom he enjoys having weekend hunting trips and building a cabin in the woods with. But Nick’s past catches up with him when his former partners whom he stole money from come looking for him and they take the most precious thing to him – his wife. Now Nick finds himself caught between trying to stay honest and seeking revenge on his old crew, led by the sadistic Sloan (Frank Grillo), while the local sheriff, Frank Parson (Taylor) — who also happens to be his father-in-law – chasing him as a suspect.

Harvey’s film starts out quite promising and similar to his other two features, it is a slow-burning, almost dismal film that starts out downbeat and stays that way for most of its run apart from a few moments where there are some violent outbursts that seem to just bubble up from the undercurrent. Visually, Into the Ashes looks stylish and sleeker than its limited budget would suggest.

That’s all good, but just like Harvey’s previous films, this film quickly loses focus. It is a revenge film on paper, but Harvey doesn’t seem to know if he wants to focus on the revenge of Nick’s partners or on Nick’s revenge for what has happened to his wife, so the film splits and the story becomes convoluted. Ostensibly Grimes is the lead actor, but it is Frank Grillo who turns in the best performance as the frightening ex-con looking to get even early on in this film. By the final act, Into the Ashes implodes and offers up a rather lame finale unworthy of a revenge thriller. 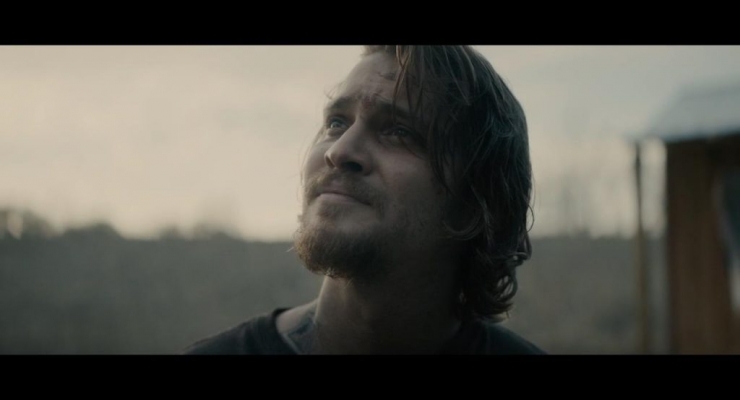 The film was shot digitally on the ARRI Alexa with ARRI Master Anamorphic lenses and arrives on Blu-ray in an AVC 1080p encodement framed at 2.40:1. The film has a desaturated palette with cold hues like blue and greys, so it’s not a film that really ‘pops’ but it does fit the mood of the story.  The image looks filmic, but there is some noise, especially in the darker scenes of which there are many in this moody revenge thriller. Overall, it is a satisfying Blu-ray presentation for this little indie film, but perhaps more of a second tier in image quality, not a top shelf reference title.

As is the case with the image, Into the Ashes has a very serviceable audio mix, but not one that will be considered top-shelf reference quality. The English DTS-HD Master Audio 5.1 audio mix is rich in atmospherics and provides clear dialogue. The amount of sound effects in the surrounds seems to come and go, but overall balance is good.

There are only two behind-the-scenes featurettes included that offer interviews with the cast and crew.

There are many elements in this film that have a lot of potential, including the excellent cast and the elements of the story, but they just aren’t put together in a compelling enough way to make this a truly rousing revenge thriller. The Blu-ray release is fine enough, but not reference, so renting digitally may be best for this film.

3.1 / 5 TheaterByte Rating
{{ reviewsOverall }} / 5 User Rating (0 votes)
Michael Bruce Pictures | North of 84 Productions | RLJE FilmsStudios & Distributors
Aaron HarveyDirector
Aaron HarveyWriter
97 Mins.Run Time
$14.99MSRP
3 September 2019Release Date
2.40:1Aspect Ratio
AVC 1080pVideo
English DTS-HD MA 5.1Audio
English SDH | Spanish | FrenchSubtitles
The Creative Content
The Video
The Audio
The Supplements
Summary
Nick Brenner (Luke Grimes) was living a quiet life with his wife and working an honest job, believing he had outrun his violent, criminal past, but his old crew come and find him looking for payback for the money he stole from them. When the leader of his former crew Sloan (Frank Grillo) takes Nick's wife, Nick must seek revenge, upending the quiet existence he was trying to lead. A slow-burning revenge thriller that barely rises to a simmer and often loses the plot, the best performance comes from supporting actor Frank Grillo early on in the film and the finale is rather lame. The Blu-ray is a satisfying disc.
What people say... Login to rate
Order by: