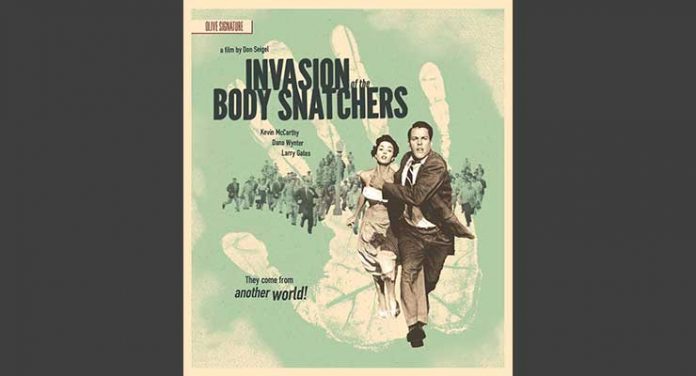 This is the original 1956 version of Invasion of the Body Snatchers starring Kevin McCarthy and Dana Wynter. The film would later be remade in 1978 starring Donald Sutherland and Brooke Adams among others. As successful as the remake may have been, there is something special about this original. Made during the height of the Cold War, the Red Scare, and the boom in horror features from Universal and others, this black & white classic tapped into a heightened paranoia that no other horror film had done up to that point.

Directed by Philip Kaufman with a screenplay by Daniel Mainwaring based on the serialized story from Colier’s Magazine by Jack Finney, the story follows a small-town doctor, Dr. Miles J. Bennell (Kevin McCarthy) who realizes that the people of his town are having their bodies replaced by soulless, lookalike aliens hatched from pods. These “pod people” are determined to take over everyone, including Miles and his girlfriend Becky Driscoll (Dana Wynter) who manage to be the sole hold-outs.

The film is a fascinating character study and psychological thriller, it grows increasingly chaotic and each of the citizens of the town who are aware of what is taking place become increasingly suspicious of one another. Distrust spreads like a disease that may be just as pervasive as the soulless pod people.

Shot more like a film-noir than a traditional horror film, Invasion of the Body Snatchers is visually striking, and this visual aesthetic helps draw the viewer into the fear as much as anything. There are no monsters in the traditional sense in the film, just people who were once friends and loved ones who may now look the same, but are different and emotionless, yet capable of pretending to have emotion. This is what makes the film one of the scariest and long-lasting of all the classic horror films.

Invasion of the Body Snatchers is labeled as a “new high definition digital restoration” by Olive Films for this Blu-ray release on their Olive Signature imprint. It’s a wonderful looking new restoration of this classic 1956 black & white horror film, which arrives here in an AVC 1080p encodement framed at 2.0:1. On my reference display, an LG OLED, the nuance of the variances of greys looks spectacular while the inky blacks and stark whites are gorgeous. The transfer is really clean but isn’t scrubbed so much that the film loses all texture and organic filmic qualities.

The original monaural soundtrack for Invasion of the Body Snatchers is provided in a clean and full sounding DTS-HD Master Audio 2.0. There’s little clipping to be heard and it conveys the dialogue, score and effects well.

This Olive Signature edition of Invasion of the Body Snatchers comes packed with a magnificent array of special features from two audio commentaries to numerous interviews and explorations of the film’s production, new and archival. Additionally we get an excellent essay and gallery.

A psychological horror in its purest form that plays up the 1950s paranoia to a tee, Invasion of the Body Snatchers arrives here in a gorgeous new restoration on Blu-ray from Olive Signature packed to the brim with fantastic special features.

Invasion of the Body Snatchers is out on Blu-ray on October 16, 2018 from Olive Films