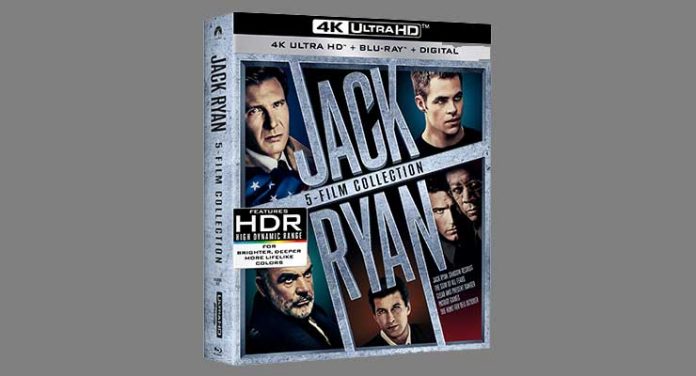 Paramount has reissued the Jack Ryan 5-Film Collection in one set on 4K Ultra HD. The films, all based on the novels of Tom Clancy, and directed by different directors, follow the exploits of CIA analyst Jack Ryan (played by Alec Baldwin, Harrison Ford, Ben Affleck, and Chris Pine). If you want to go chronologically by story, then you can start with the newest of the films, the 2014, Kenneth Branagh directed Jack Ryan: Shadow Recruit, which acts as a prequel/reboot to the events that occur in Patriot Games and Clear and Present Danger.  The Hunt for Red October, the first of the films, which also star Alec Baldwin in the titular role as the CIA analyst is the strongest of the films, even if it also stars the boorish, slap-happy Sean Connery as a Soviet admiral of an advanced nuclear submarine that has gone rogue. The Sum of All Fears has Ben Affleck stepping into the role in a project that was originally begun with Harrison Ford in mind and stars Morgan Freeman as the two must try to stop a nuclear war between Russia and the United States after a nuclear bomb is exploded in DC. Harrison Ford has the distinction of being the only actor to play the role of Jack Ryan in more than one film. His stint in Patriot Games and Clear and Present Danger stands as the strongest portrayal of the Tom Clancy character on the big screen. The first of the two films have Ryan thwarting an assassination plot against the British royals by the Irish Republican Army, then facing retaliation against his family. In Clear and Present Danger Ryan is caught up in an illegal war in Colombia against the drug cartels. These are all some of the political thrillers on film and a long-running franchise that predates the popular Jason Bourne series. Everyone should take these in before seeing the newly launched Jack Ryan series on Amazon to get the whole backstory.

Each of the films in the Jack Ryan 5-Film Collection comes to Blu-ray with a 2.35:1 HEVC 2160p (4K) encodement with Dolby Vision HDR. They look pretty consistent as far as picture quality, with natural grain and a clean look with no big issues with source damage. The Dolby Vision is applied well, but I have seen better. The colors look natural, but highlights don’t quite ‘pop’ as brightly as they could, except in Shadow Recruit, which has the most vivid array of colors and brightest highlights. The biggest issue with all the films on 4K Ultra HD is that they appear to have gone for a consistent look across all films – a bit desaturated and very dark in the shadows, too dark. The blacks are too amorphous – try making out a lapel on a navy blue or black suit in any of these films unless the person is standing in the sunlight or under a light and you can’t make it out. It’s the same with hair – you can hardly make out each strand of hair.

Every film in the Jack Ryan 5-Film Collection except Shadow Recruit comes with a Dolby TrueHD 5.1 mix; Shadow Recruit comes with a DTS-HD Master Audio 7.1 mix. The mixes are all good, but none of them are aggressive, but they have superb balance, atmospherics, and clarity. The Hunt for Red October is the quietest and most dialogue-driven of the films, but it does have some explosions and thunderous sounds of submarines underwater. The rest of the films, of course, have a few scenes with bombs, gunshots and explosions that offer up plenty of low-end “oomph”.

There are no new special features included in this collection. These are all port-overs from the previous Blu-ray releases of the Jack Ryan movies and most are in standard definition. Digital Copy is included for each film.

The Hunt for Red October:

The Sum of All Fears:

The Jack Ryan 5-Film Collection is a solid set despite some minor picture quality flaws and a lack of new special features. It’s great to have all five theatrical films in one 4K Ultra HD set with Dolby Vision, just in time for the new series on Amazon Prime Video.