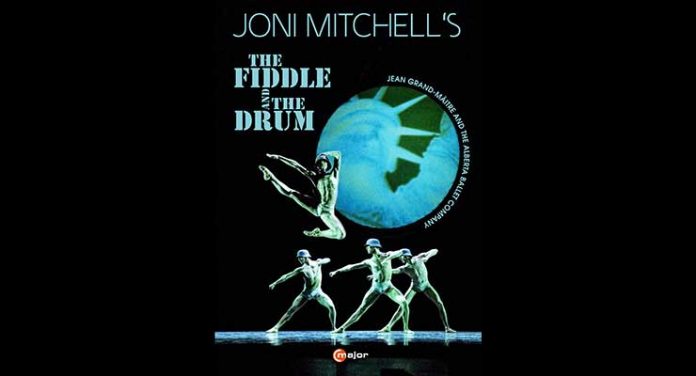 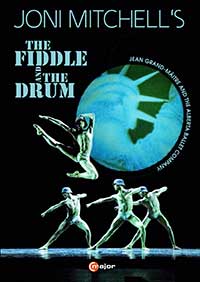 The multi-talented artist/composer/singer Joni Mitchell collaborated with fellow Canadian choreographer Jean Grand-Maître on this balletic adaptation of eleven songs from the Mitchell archive that span her professional career. Those familiar with Ms. Mitchell’s themes will recognize her long-held views on war, the inspiration for the title song, “The Fiddle and the Drum,” the environment, and recreational drugs, among others. Against a backdrop of projections from Joni’s artwork for “The Green Flag Song,” 26 members of the Albert Ballet Company’s corps de ballet deliver classically informed dances to the following numbers:

This Blu-ray release is a long overdue document of a live 2007 performance held in Calgary, Alberta. The slightly clad dancers, their bodies lined with earth-colors, find just the right tone for each of Mitchell’s songs that draw attention to the messages contained therein without being heavy-handed. Grand-Maître is one Canada’s leading dance-masters and is particularly noted for his choreography inspired by the works of popular singers such as Elton John and Sarah McLachlan. In this instance, the synergy between choreographer and composer is nicely displayed in the relatively brief routines of this program.

Given a bare stage, lighting with a greenish cast, and monochromatic background projections, the color palette is deliberately limited. Details are nicely presented and the camerawork by Mario Rouleau’s crew is quite effective in conveying the live experience of the dance.

There is a modest amount of ambience in the surround channel version with a mostly upfront presentation of the songs and instrumentations that were clearly replayed through loudspeakers in the performance venue. The vocals and the relatively spare accompaniment are well-defined and spacious.

The program booklet has performance and production credits, a track listing, a background essay on the production and Joni Mitchell’s personal take on how it all came together. Several video bonuses are also included:

The Fiddle and the Drum was clearly a labor of love for all the artists involved in its creation and eventual performance nearly a decade ago. The message-laden songs that were set to dance are just as relevant today as they were when they were newly written. Viewers like myself who have been entranced by the unique artistry of Joni Mitchell since she appeared on the music scene in the 1960s will thoroughly enjoy this hour-long traversal of some of her best songs enhanced by simply superb dance routines. Hopefully, this performance will draw a younger and new audience to this music and stimulate enthusiasm for more from this exciting Canadian ballet company.