Ten years in the making, Ken Burns’ and Lynn Novick’s sprawling, 10-disc, 18-hour documentary The Vietnam War, a series that Ken Burns has said he hopes will help bring the country together at a time when he seems to splintering hopelessly, details one of the most divisive wars and eras in the nation’s history. In the style that Burns has refined over the decades in such fascinating documentaries as The Civil War, Baseball, and Jazz, he leaves no stone unturned to tell the story of this war from every angle through photographs, archival footage, and interviews with people from every side – those for the war, those against the war, the South Vietnamese, and the North Vietnamese. Set to original music from Trent Reznor and Atticus Ross, Burns’ slow-pan across still photos interplay with the film footage and Peter Coyote’s narration to form a riveting narrative of the war that begins all the way back in 1890 and the French colonization of Indo-China.

Unlike most documentaries on the Vietnam War, this 18-hour marathon doesn’t fixate on only the obvious decade of the 1960s, but tells of all five U.S. administrations over which the conflict actually stretched and, as mentioned, starts with the roots of the conflict even before then.

Burns and Novick also manage to weave into their narrative the cultural upheaval the Vietnam War itself would cause on the American public, from the anti-war movement, pro-war movements, burgeoning of the civil rights movement tied into the war protests and the impact on the arts.

The cultural aspects of the war are all very enlightening and unavoidable, especially when it stretches over decades and five presidents, but the most intriguing is the impact on the lives of he soldiers and their families and the varying perspectives from both sides of the war. Once one sees the broader perspective of how colonialism changed Vietnam and caused the uprising of Vietnamese wanting their country back, Ho Chi Minh, who had been influenced by communist ideology since earlier in the 19th century, leading his people to rise up and unify in order make Vietnam once more independent and the events that led to there being a split between the South and North to begin with long before the United States decided to send ground troops and take over responsibility of defending the South, which was meant, through treaty to reunify with the North, it all becomes much clearer of why it was a lost cause from the beginning.

Like The Roosevelts and The War, The Vietnam War should be required viewing in classrooms and gives a detailed history of this drawn out, bloody and controversial conflict, while also giving some details that have probably been forgotten to history over time. There’s a quite interesting tidbit on Richard Nixon in there that seems particularly relevant in today’s political climate. 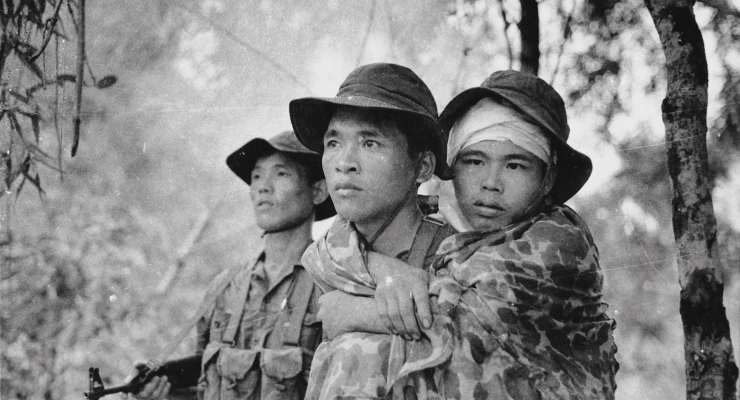 The Vietnam War was shot in HD and like most of Ken Burns’ documentaries comes from a mixed variety of sources. The interview segments look good, but do show some obvious video noise and low level banding. The archival footage and photos varies in quality, but comes across as authentic and organic.

The Vietnam War comes with an English DTS-HD Master Audio 5.1 mix as well as a 2.0 stereo mix. The 5.1 is subtle, but it does provide excellent atmospherics and a solid low-end during the footage of battles. The narration from Peter Coyote is clear and full in the center channel as is the dialogue from the various interviewees. The 2.0 mix will work just as well for this material, with just a little less immersion.

The included special features expand the story further, both by giving a detailed making of for the documentary, further stories of the veterans, and more.

A+ on this well researched and exhaustive documentary from Ken Burns and Lynn Novick. This is a riveting, must see documentary that strives to get to the heart of one the most divisive wars and eras in United States history, while also giving a balanced history of the conflict. Highly recommended.