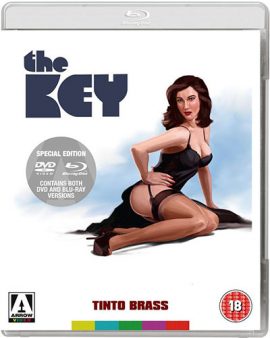 In his 1983 film, The Key (La chiave), the erotica auteur Tinto Brass begins to show earmarks of the style he would eventually become predominantly known for – his explicit sexual scenes, a preoccupation with the female buttocks, and, as always, the fascinating cinematography and humorous overtones of his storytelling.

Based on a novel by Tanizaki Jun’ichirô, The Key is a story that would be familiar terrain for Brass and anyone familiar with his brand of art house erotica. A husband and wife, Nino and Teresa Rolfe (Frank Finlay and Stefania Sandrelli), begin writing to each other about their sexual fantasies in diaries meant to be hidden away, but they each know the other is reading their private thoughts. Instigated by Nino to help his much younger wife of twenty-years break away from the modesty he feels has kept their sex life stifled, the plan eventually leads to sexual experimentation, especially on the part of Teresa, who becomes fascinated with the couple’s daughter’s fiancee, Lazlo (Franco Branciaroli), a sexy young photographer. This unexpected twist is the cause of immeasurable angst, jealousy, and, paradoxically, arousal for husband Nino, but also leads to an unexpected conclusion.

What can I say here? Just like the companion Tinto Brass release from Arrow of All Ladies Do It, The Key does not fare well in this Blu-ray release. The AVC/MPEG-4 1080p encodement lacks strong contrast, color saturation is poor, the grain structure is quite thick, the image is soft, some spots show some posterization, and there’s just a lack of depth to the image. Shadows are murky, absent of nuance and detail. It’s a shame, not because you’re missing out on the explicitness of Brass’ scenes, but you’re losing the impact of the gorgeous cinematography that his films are known for.

The original Italian-language soundtrack with new English subtitles and an English dub are offered in LPCM 2.0 mono (48kHz/16-bit). The Italian track sounds a bit fuller than the English dub, but both have hints of hiss and crackle and are a bit boxy in sound.

This is another unusually light offering from Arrow providing only the theatrical trailer on disc and the usual reversible sleeve and booklet with essay. It does, however, come with the standard DVD of the feature as well.

A better exploration of the similar themes Brass would explore in the even more explicit All Ladies Do It some nine-years later, The Key will be an enjoyable diversion for those erotica fans who love naturally beautiful women, a feasible plot, and enticing cinematography.