George Lucas is the executive producer of this pure Jim Henson fantasy that employs real-life actors Jennifer Connelly and David Bowie at the center of a world populated by his imaginatively designed Muppet creatures. A slightly dark, but still family worthy fantasy adventure in the vein of Alice in Wonderland or The Wizard of Oz, which is alluded to multiple times through the appearance of the actual book being shown in multiple shots, the story revolves around teenager Sarah (Connelly) who is rather upset by being saddled with babysitting, yet again, for her bay brother. Sarah, who loves to fantasize about the world of “Labyrinth”, a place of knights, and princesses, sorcery, and goblins, offhandedly wishes that her little brother be taken away by goblins. When the creatures really come and take him away, she ends up encountering Jareth the Goblin King (Bowie), who tells her that the only way she can reclaim her brother is if she reaches his castle at the center of a winding garden labyrinth before the allotted time.

Sarah sets out into the labyrinth and comes across various creatures and pitfalls, such as the Bog of Eternal Stench, and the sweepers, while also gaining various aides on her journey like the big furry creature Ludo and the dwarf Hoggle. Eventually after many travails she reaches the Goblin King’s castle in what is a dizzying, gravity-defying ballroom sequence.

Connelly is the ostensible star of the film in her all of sixteen-years at the time, but its obvious her acting skills weren’t exactly honed yet, or at least, not really encouraged past standard silly teen fare. Bowie is the real standout of the film, donning his teased rocker wig and skin-tight stretchy pants that accentuate certain parts of his anatomy. The rocker also provided a number of songs for the soundtrack, most of them fitting in with his style at the time, but not necessarily with the style of the film. It’s the side vignettes and kinetic energy that make the film watchable and the non-CGI practical effects, and, of course, Henson’s inimitable Muppets that, while they firmly plant the film in an era, also make it organic and relatable in a way that digital productions are not. 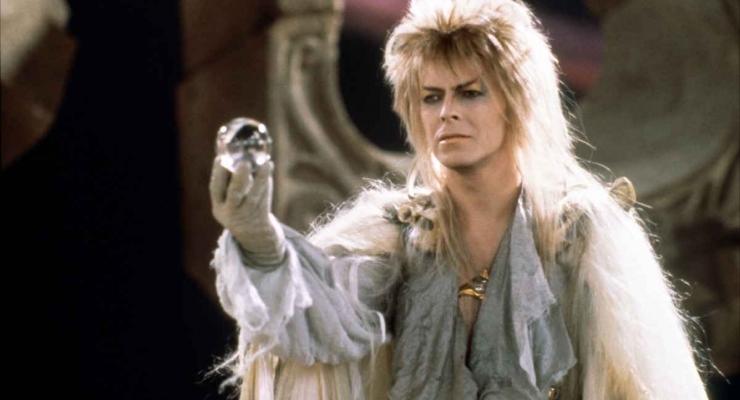 Labyrinth has been restored in 4K for this this new digital transfer (a 4K Ultra HD version is also available) on Blu-ray. The film looks stunning, 30 years or not. It has been cleaned up nicely, but the film’s grain structure is still intact and there are sharp amounts of texture still there. One can make out the small details on Henson’s Muppets and see far down the paths of the twisting labyrinth. The midtones are rich and shadows nuanced.

Labyrinth get a brilliant new Dolby Atmos audio mix for its 30th anniversary that adds new depth to this fantasy adventure. The sound of the sweepers when Sarah and Hoggle are running from them now totally surround you, but also little things like cymbals in the musical score sound further out and higher up, everything is more spacious. The dialogue is clean and there’s a natural dynamic range.

Labyrinth is celebrating its 30th anniversary and has been newly restored in 4K for what is a dazzling new release on Blu-ray (a 4K UHD edition is also available). This enduring, campy, yet lovable fantasy is wholesome fun that is perhaps the epitome of Jim Henson’s style and a step above his earlier effort, Dark Crystal.