As the two grow closer together, Mathilda professes her love for Léon, and begins to try to seduce him into taking her virginity and also tries to hire him to kill the men who killed her family. Natalie Portman, in her first starring role, displays a talent far beyond her years here and certainly hints at things to come (notwithstanding the Star Wars prequels). In fact, in the supplements on this disc, Portman explains how landing this role helped her to avoid the typical child star trap of doing kids movies, as she would from this point on be viewed as an “adult” leading actress. I would be remiss to not also point out Gary Oldman’s typically strong character performance as the corrupt and murderous, drug addicted DEA agent Stansfield. 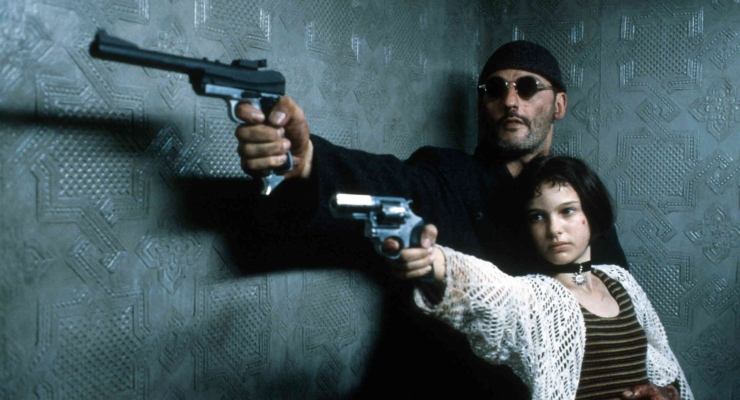 The 4K remastered Blu-ray from two years ago looked fantastic, this disc, mastered with HDR10 and offered up in a 2160p “4K” HEVC encodement looks just stunning. The crispness of the film grain and the extended depth of field are at once noticeable. What is also noticeable at once are the way the colors ‘pop’. This isn’t exactly known for being a colorful film, but thanks to the WCG (Wide Color Gamut), things look a lot more lifelike from the get go. The opening hit man sequence with Jean Reno in the luxury apartment offers up some stunning colors, but so does the scene with Reno in the grocery store early on – just look at how the labels on the products really leap from the screen.

When I last reviewed this film on Blu-ray for the 2015 4K remaster it had the same Atmos track, but I had not yet made the upgrade. The mix sounded great then played back in 7.1 TrueHD on my 9.1 system, but now it is even better in the true, immersive Atmos version with superb overhead ATMOSpherics (I couldn’t resist). As suspected, in the final act when the bullets begin to fly and the explosions start coming at a frenzied pace, this mix is really at its best.

There’s nothing new added to this Ultra HD release over the 2015 4K-remastered Blu-ray. In fact, the Blu-ray included alongside the Ultra HD disc is identical and contains all the same, ported-over standard definition features plus the HD theatrical trailer. Digital HD UltraViolet is also included.

What is arguably Luc Besson’s most classic film is reissued in a stunning Ultra HD release from Sony that has the film looking and sounding better than this reviewer ever thought possible. This new Ultra HD version becomes hands down the definitive version of Léon to own.

[Editor’s Note: The release reviewed here and linked to below is a Best Buy Exclusive]