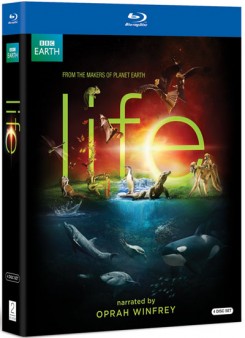 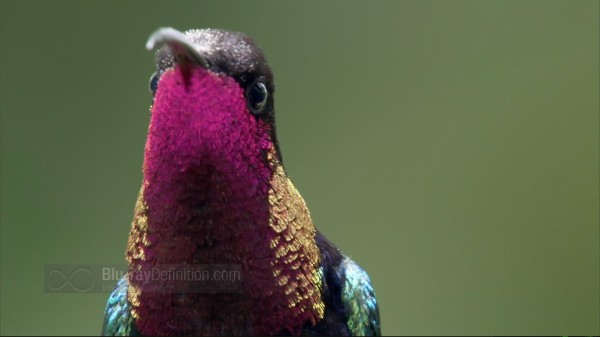 Over four years in the making, Life is the BBC’s grand sequel to their groundbreaking and record shattering documentary series Planet Earth. Where the latter focused on our planet and its various climates, puts the focus squarely on the various creatures that inhabit our big blue globe. It has been described by some as “evolution in motion.”

The crew used the latest in high definition filming techniques such as something called a “yogi cam,” developed specifically for Life, which allowed a camera to track smoothly alongside migrating reindeer and elephants. Other firsts in this production include intricate cable rigging that allowed the crew to “fly” right through thousands of monarch butterflies in Mexico, dolphins filmed from the air “mudringing,” creating ever-tightening rings of mud to trap fish, three cheetah brothers cooperatively hunting to take down an ostrich, and capuchin monkeys using stones as tools to crack open palm nuts.

Famed veteran British naturalist David Attenborough originally narrated the series, but the U.S. version dubs the narration with the voice of Oprah Winfrey. The script has also been altered a bit for U.S. audiences leaving the text, and Winfrey, sounding very childish. Having watched the U.K. version on Blu-ray previously, I have to admit to a strong preference for the Attenborough narration. He just imparts a strong sense of knowledge and wisdom. I was disappointed when the studio decided to send out the Oprah version for review, but was perfectly willing to give it a fair shot. I’m forced to mark this remarkable series down a point due to her narration. Thankfully, the U.S. version allows for viewing with the narration turned off, but that also means some crucial information will be missed, unless subtitles are turned on, marring the beautiful imagery.

The Challenges of Life: Introducing the extraordinary things animals and plants mustdo in order to survive and thrive. Witness capuchin monkeys smashing open palm nuts with stone ‘hammers,’ hippos launching from the water into the air and chameleons stealing prey from an spider’s web. Sprint with cheetahs as they band together ti tackle ostriches; watch dolphins form perfect rings of mud to trap fish and swim with a seal as it struggles to escape attacking killer whales in the ice of Antarctica.

Reptiles and Amphibians: From icy wastes to arid deserts, reptile and amphibians have used their ancient, cold-blooded body plan along with sophisticated behavioral innovations to master he harshest environments on the planet. See Komodo dragons hunting buffalo, sea snakes with one of the most toxic venoms in the world that breed in caves, the seemingly suicidal leaps of a waterfall toad, the tender giant African bull frog that digs water channels to save not only its own young, but that of others too; and lizards that can walk on water.

Mammals: New filming techniques reveal behavior that was previously impossible to capture in extreme locations. Fly among one of the largest migrations on Earth as more that ten million fruit bats leave the Congo basin and converge in a few special trees in Zambia to feed, sprint with the tiny, extraordinary-looking sengi as it escapes a predatory lizard, see 30 polar bears gather to feed on a bowhead whale carcass and witness the biggest fight on Earth — male humpback whales battling fir a female.

Fish: Fish can fly, sense electricity, swim at over 100mph and even walk on land. From open ocean to coral reef and storm-ravaged surf to the freshwater springs of Kenya, swim with sharks, mudskippers and convict fish. See the hilariously named “sarcastic fringe-head” fighting for its home territory; hunt with sailfish; glide with flying fish, enter the secret world of courting sea-dragons; and even join the epic journey of the tiny, cliff-climbing goby.

Birds: Birds are supremely adaptable, capable not only of flying at phenomenal speeds and covering great distances, but of displaying a murderous nature, running on water in pursuit of love and even of building intricate structures. Using aerial camera techniques, Life flies with the birds and explores their incredible diversity and behavior: dodging the piratical frigate birds; soaring with the lammergeyers; dancing with a thousand flamingos in the lakes of Africa; and witnessing the extraordinary displays of spatula-tailed hummingbirds, western grebes and bowerbirds as they all attempt to attract a mate.

Insects: Insects are the most diverse animal group on the planet. The key to their success is their unique ability to reshape themselves. They possess fearsome weapons, yet can display surprising tenderness and sophisticated behavior. Take to the skies with millions of monarch butterflies in Mexico, see a beetle spray boiling chemicals at its enemies, witness giant bees fight to the death over females, join the marching columns of grass cutter ants and spend a jeopardy-filled day with damsel flies.

Hunters and Hunted: Every day, in jungles, grassland, deserts, and frozen wastelands, battles are won, fought, and lost between carnivores and their prey. See cheetahs join forces to bring down an ostrich, a tiny stoat take on a rabbit ten times its size, elephant seal pups snatched from their nursery pool by a killer whale, the antics of squirrel as it outwits a rattlesnake and at an amazing 2,000 frames per second, the strike of a bulldog bat flying at 60mph.

Creatures of the Deep: Using specially developed underwater tracking time-lapse techniques, Life takes a journey to the uncharted corners of the ocean. It’s here the newest discoveries are being made and the strangest creatures live, from huge spider crabs which gather in their thousands, seeking safety in numbers as they shed their shell, to cross-dressing giant squid. Join a 250-strong pack of Hunboldt squid on a hunting expedition, see the ultimate self-sacrifice of a Pacific giant octopus mother who starves to death tending her young and dive under the permanent ice if Antarctica to see a seething carpet of starfish as they devour a seal pup carcass.

Plants: The drama of the plant world is impossible to view with the naked eye, But using the latest time-lapse technology, all is revealed: how a Venus flytrap snaps shut and imprisons its prey and how the animal-like grasping hooks if the cat’s claw creeper and the sticky pads of the Boston ivy help in their fight for light. Fly with the seed that inspired the design of gliders, watch the fastest growing plant of Earth rocket up to two feet a day and discover the water-trapping abilities of the bizarre blood tree, which oozes red sap from its branches.

Primates: Primates are uniquely intelligent — engaging in problem solving, communication, tool use, and intimate social interplay. In the Congo, meet a tightly bound group of western lowland gorillas led by an ancient silverback, whose chest-beating sends shockwaves more than a mile through the undergrowth. See grey Phayre’s leaf-monkey mothers in Thailand battling for the privilege to babysit bright orange newborns. Encounter the violent disputes of a thousand hamadryas baboons and join chacma baboons shark egg hunting on the coast of South Africa.

The Making of Life: This special behind-the-scenes episode showcases the exhaustive, remarkable and record-breaking efforts by the Life filmmaking team to bring the breathtaking images of intimate animal and plant behavior to the screen. 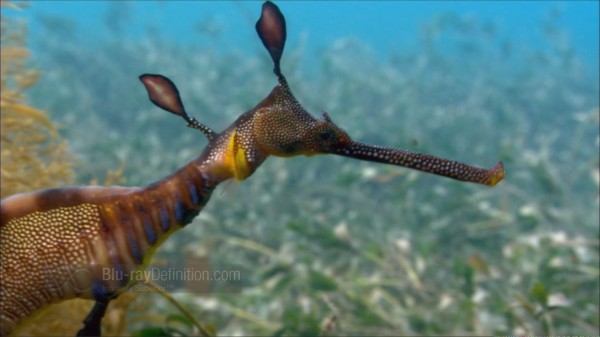 The U.S. release of Life is given a beautiful 1080i/60 VC-1 encoding that hardly shows any artifacts. The original UK Blu-ray release is in 1080i/50, so I would presume that this has been converted from that, but it shows no adverse signs of judder. Colors are vibrant and the detail is superb. The famous BBC macrophotography pops from the screen. Dare I say that, although this is 1080i as opposed to 1080p, it has surpassed the quality of Planet Earth as the reference leader. 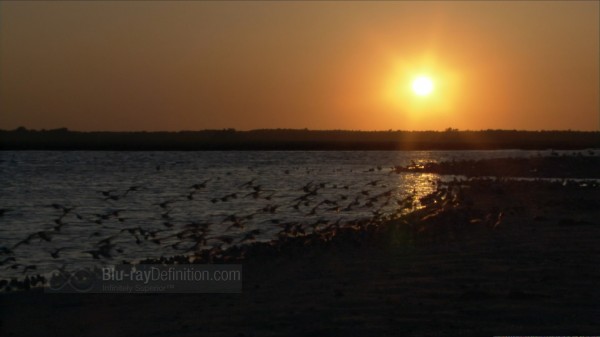 Audio is another matter entirely on Life. Although the sound has been upgraded from Planet Earth’s rather harsh sounding Dolby Digital, it has still been given only a lossy DTS-HD High Resolution 5.1 soundtrack. It’s adequate in conveying the subject material, but some opportunities were definitely missed in the mix to truly surround the listener in the natural world, in this reviewer’s opinion.  The surround channels were a bit too tame and ambient sounds too low when they could have been a bit more present and the LFE could have been beefier. 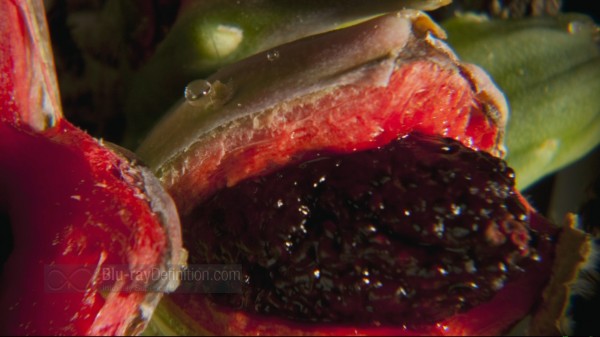 The supplements consist of brief but very informative on location “Making Ofs” for each episode, thankfully narrated by David Attenborough and deleted scenes. Viewers will surely enjoy them. The making ofs can all be seen brought together in Disc 4’s “The Making of Life” episode, but there they are narrated by Oprah Winfrey. 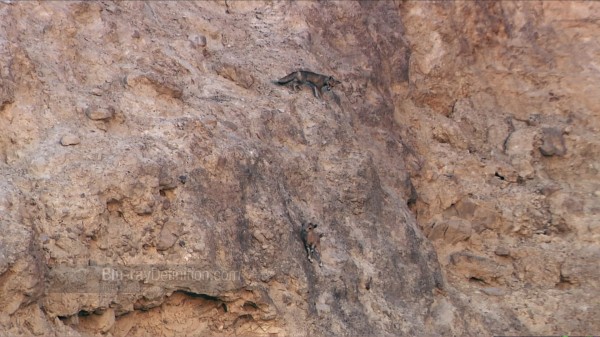 There’s really only one word that can be used to describe the BBC’s Life series, and that is “awesome.” With Life the BBC have outdone themselves and set a new standard in nature documentaries. I will, however, suggest everyone do themselves a favor and bypass the Oprah Winfrey version for the David Attenborough, which is also being released in the U.S. 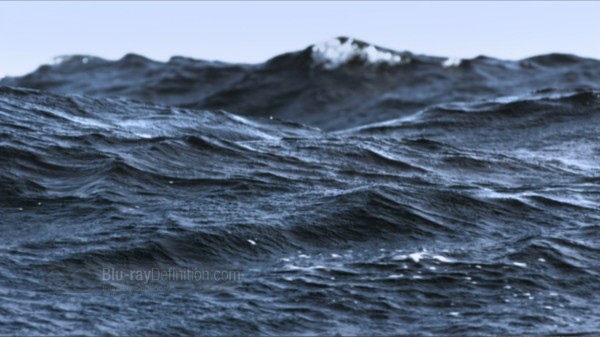 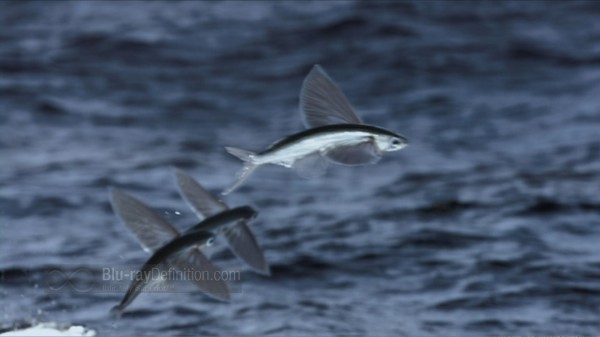 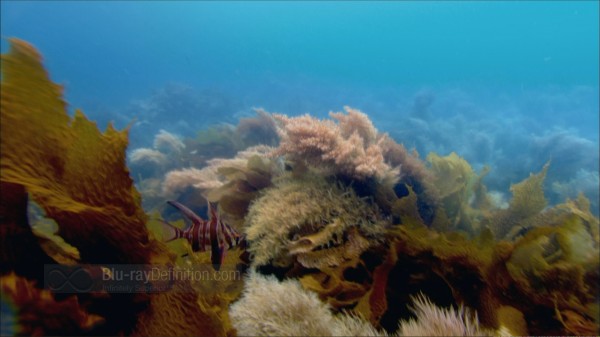 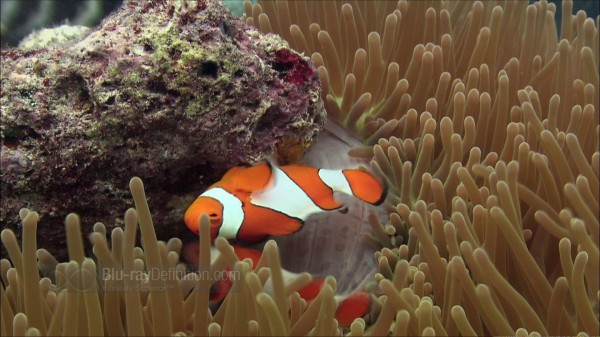 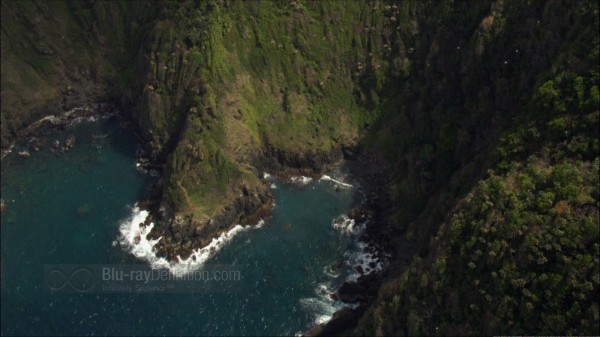 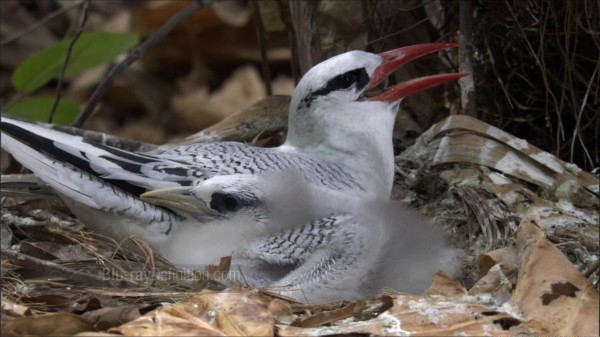 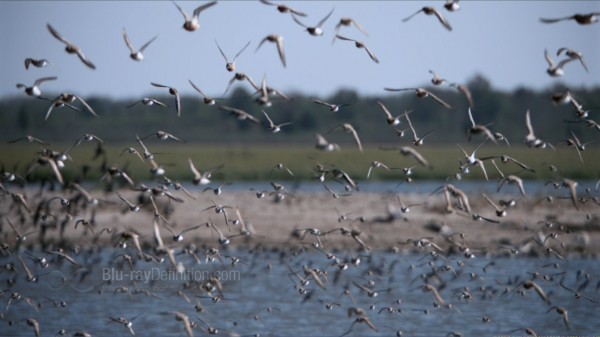 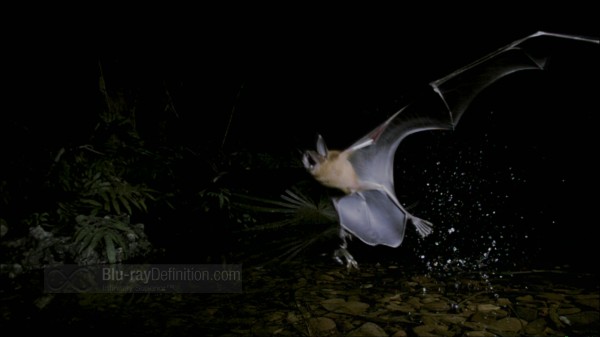 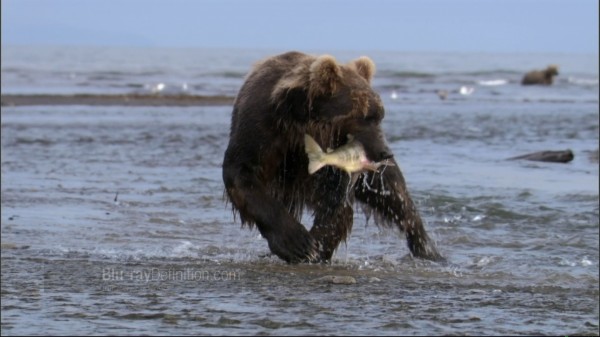 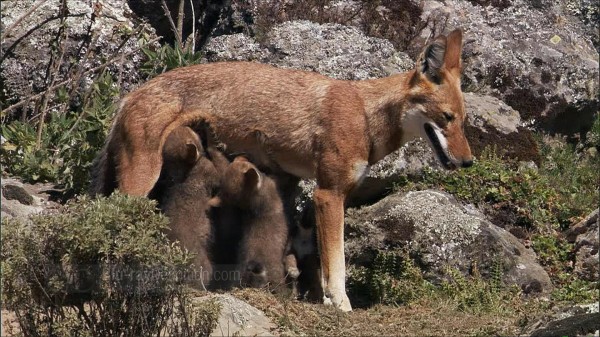 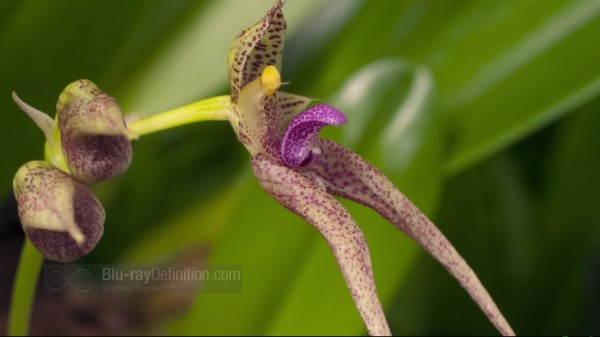 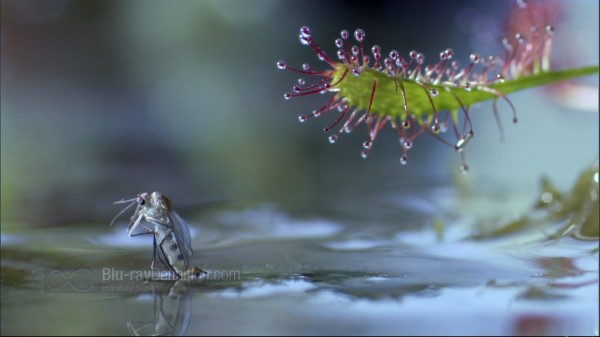 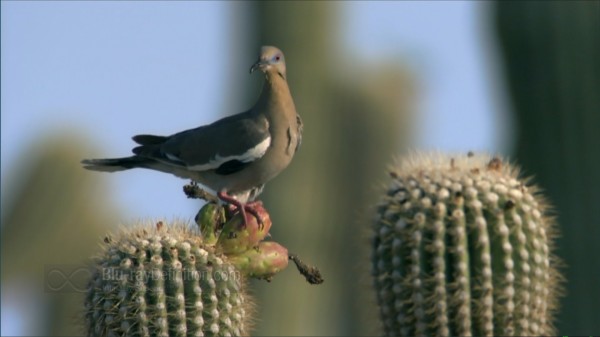 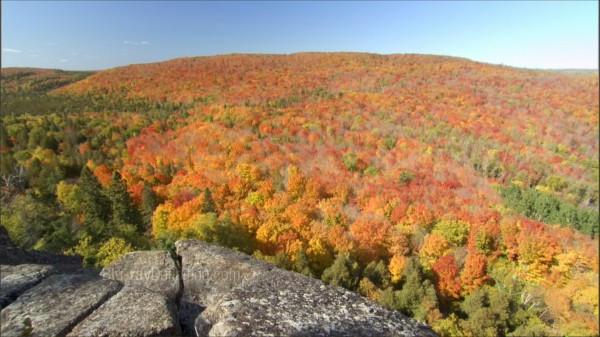