Lu over the Wall (Blu-ray Review) 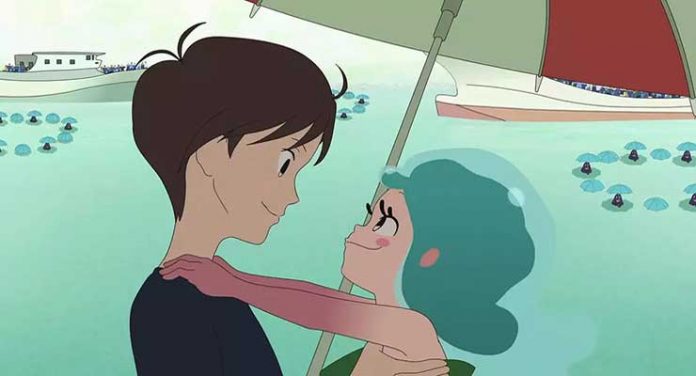 Masaaki Yuasa is often referred to as a visionary anime director, and that title is definitely well-earned with a title like Walk on Girl in his catalog. With Lu over the Wall, the director takes on the classic tale of The Little Mermaid, which has been done multiple times, most notably in animation by Disney and Studio Ghibli’s Ponyo. This being an anime production, Lu more resembles the latter both visually and thematically, although it doesn’t quite reach the heights of Miyazaki Hayao’s fantasy.

When his family leaves the bustle of Tokyo to return to their roots in a small fishing village, musically talented teenager Kai spends most of his time sulking and developing electronic beats alone his room on his laptop. Two of his classmates invite him to join their band and add his electronica to their guitar/bass duo, and their secret late-night rehearsals in the village’s forbidden zone, where legend says dangerous mermaids lure fishermen and eat them – brings out Lu, a young mermaid who loves music and can sing. Furthermore, Lu’s fins turn to legs when she hears music, and her singing compels humans to dance. Lu and Kai strike up a friendship and Lu helps Kai’s new band garner fame, but that also puts Lu and her seafaring family in jeopardy due to the long-held fears in the village about the mermaids.

Lu over the Wall is a satisfying and at times mesmerizing modern update on the Little Mermaid tale, capturing lots of the modern teen sensibilities in its music and concerns. It is visually striking, despite some similarities to the Miyazaki effort, but there also lies the rub. One is hard-pressed to come into this film without the weight of what has come before it weighing on the back of one’s mind. Can one make a Little Mermaid without referring to so many of the same tropes? The forbidden love? The fear of differences? The powerful father from the sea? Visually there’s a similarity I see between the two mermaids in Lu and Ponyo as well, particularly the young Ponyo and Lu in their moe eyes and wide smiles, although that is the extent of it. Masaaki certainly has a unique style that borrows from Miyazaki in some ways but goes off in its own unique direction.

The strengths of Lu over the Wall are how Masaaki and his co-writer Yoshida Reiko build a genuine, heartfelt friendship between Kai and Lu, and his direction keeps the story energetic, and the artwork, the strongest part of the film — like a melted bag of Skittles poured over your brain – enticing. Lu over the Wall looks beautiful in the 1.77:1 AVC 1080p encodement on Blu-ray. Colors are vibrant, the animation is crisp and clean, and there’s little noise or banding.

Lu over the Wall comes to Blu-ray with an engaging audio mix of its original Japanese track in DTS-HD Master Audio 5.1 as well as an English dub in DTS-HD Master Audio 5.1 and a French dub in Dolby Digital 5.1. The Japanese mix is wonderfully balanced with superb dynamic range, a high end that is easy on the ears, good panning of effects around the room, especially the musical effects and sounds of the sea, and a low end that, while it doesn’t rattle the cupboards, is weighty and extends down rather far. The English dub sounds just as good, although the performance from the cast isn’t quite as good to me as the Japanese.

The commentary and interview are excellent inclusions.

The artwork in Lu over the Wall pops, the story is sentimental, and the music is catchy. It doesn’t quite work all together as well as Miyazaki’s reworking of the Little Mermaid, Ponyo, or even reach the inventiveness of Masaaki’s own Walk on Girl, but it’s a strong outing and a gorgeous Blu-ray release.

Lu Over the Wall is out on Blu-ray Combo Pack February 5, 2019 from Shout! Factory & GKIDS