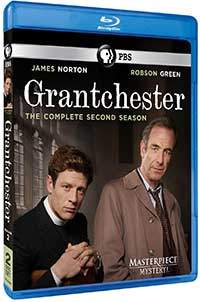 Grantchester returns for a second season with both James Norton (War and Peace) and Robson Green (Reckless) back in their roles as the unlikely partnership of the vicar Sydney Chambers (Norton) and the Inspector Geordie Keating (Norton) who solve crimes and protect the peace in the small village of Grantchester. But if the first season was about setting up the characters and their stories, the second is about growing them and taking them into even darker places. The season gets started immediately on that road in the first episode when Sydney is accused of raping an underage girl who has gone missing and later turns up dead. The death of this girl hangs over the rest of the season and Sydney and Geordie butt heads during investigations into an apparently haunted horse stable

where someone turns up hanged, the death of an abusive husband whose wife Geordie apparently had an affair with, the fatal fall of a Cambridge lecturer from the top the college spires, and the death sentence of a teenage boy Sydney and Geordie helped to arrest. With these cases and others as the backdrop, Sydney’s personal life also begins to spiral out of control, as does Geordie’s, and the two begin to fall out with one another. Sydney on his endless quest for love and companionship can’t shake his love for his now unhappily married childhood friend Amanda (TV’s The A Word) and falls deep into drink, both over her and his guilt over the teenager about to be hanged. The season is a brilliant mixture of 1950s mores with a modern twist, and excellently done mysteries that intertwine over the course of the season’s entire six-episode arc. When one mystery is solved, it is not really over, and something thought to be resolved may come back into play to help solve another crime. The writers think things through, and perhaps it works so tightly because it is not stretched too far over too many episodes.

The HD production for Grantchester arrives on Blu-ray in a 1080i AVC transfer from PBS that is acceptable in that it has natural colors, particularly flesh tones, and does not suffer from any motion artifacts or black crush. IT also had good contrast and white balance, no compression noise or aliasing, but there is a lot of strong banding that is distracting. It may very well be inherent in the digital cameras used to record the series.

A simple DTS-HD Master Audio 2.0 stereo mix is included that has good balance and decent enough stereo imaging for this sort of programing material since the series does not have many loud sound effects or action sequences. 5.1 would have been nice to capture the idyllic sounds of the English countryside, but it may just as well be overkill for the mostly dialogue-driven series.

There’s very little extra included with this season. The featurettes include some interviews with the cast and crew discussing the season and show some clips from the new season.

Grantchester continues to be a surprisingly entertaining mystery series running on PBS’s Masterpiece Mystery! programming segment in the States, and on ITV in the UK. The mysteries are interesting and not easily solved and the main characters continue to grow.