Evangelion:3.33 You Can (Not) Redo (TheaterByte Blu-ray Review) 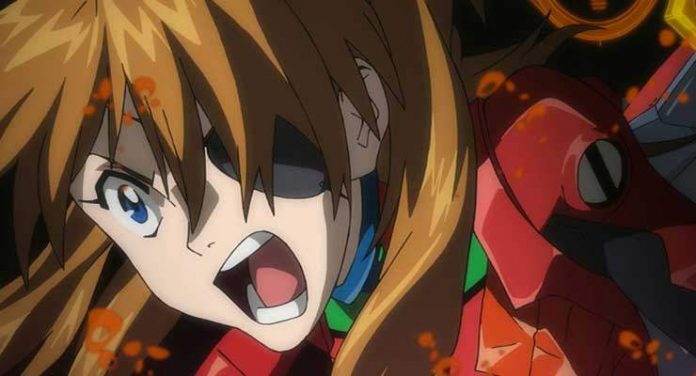 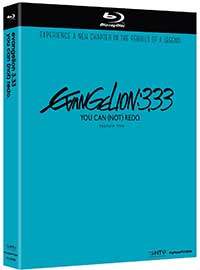 This is the home video release of Evangelion: 3.0 You Can (Not) Redo, the third film of the four-film tetralogy in a rebuild of the science fiction mecha anime series Neon Genesis Evangelion.

This film is set fourteen years after a catastrophic global event known as the Third Impact left the entire planet nearly in ruins and killed many people. Evangelion pilots Asuka Langley Shikinami and Mari Illustrious Makinami are sent out into space to recover a container wherein the Evangelion Unit 01 and pilot Ikari Shinji are sealed. Shinji is awakened into a world he no longer recognizes. Fourteen years have passed, yet he hasn’t aged, and the paramilitary organization he flew for, NERV, is now an enemy of the new organization, WILLE, for which Asuka and Mari fight. WILLE plans to destroy all the NERV Evangelion units, including

Unit 01, and keep Shinji from ever piloting one again. They fit him with a collar that will kill him if he tries to start up an Eva unit. Shinji manages to escape from WILLE to go search for the Unit 01 copilot, Ayanami Rei, who WILLE told him was never found, but whom he swears he had rescued. They try to stop him, but they are thwarted by NERV who take Shinji to their headquarters where he later befriends the strange Kaworu. From Kaworu, Shinji learns of the true destruction of the world and is himself devastated, but determined to try to save the world and return it to the way it was. Kaworu promises to help him, but it won’t be easy. It may even lead to a Fourth Impact that will cause more death and destruction.

Evangelion:3.33 You Can (Not) Redo may in fact be a little short on story and character development, its biggest flaw, but when it comes to incredible action and almost too beautiful to fathom animation, it has it all. The action starts from the beginning, and it doesn’t really let up apart from a few beautifully done almost dreamlike sequences of Shinji and Kaworu playing piano duet together as they become friends. Mostly, we get plenty of aerial acrobatics in the mecha and what is an apocalyptic battle sequence as the dénouement that only the most cynical anime viewer could dislike.

The 2.35:1 framed AVC 1080p encodement to Blu-ray of Evangelion:3.33 You Can (Not) Redo looks spectacular. The colors jump from the screen, the action sequences play out without any issues like motion artifacts, blocking or aliasing, and the image is clean. Sadly, it isn’t paired up with a reference quality audio track. See below.

It pains me to say this, but this release has to have some of the worst sound I have ever heard on a Blu-ray release for a relatively contemporary film. Provided with both the original Japanese soundtrack and an English dub, both in Dolby TrueHD 5.1, I really don’t know what the heck happened here. It sounds like it has been dynamically compressed to death and then mastered at an insanely low overall level. I had to bump volume up a whole 12db above my average listening levels – yes, That is (NOT) a Typo. The low-end extension is just awful.

There are a lot of explosions and so forth, as one might expect, but the frequencies hardly extend beyond perhaps the lower end of the midrange and the very upper end of low range. You don’t feel the lows at all. What’s disappointing is were it not for these major flaws, the mix might have been good, because you can tell there are a lot of little things going on, but the lack breadth just takes away any sense of clarity, openness and involvement.

A word on the subtitles; both Theatrical and Home Video versions are available, and sampling segments of both by viewing stretches with either or, and even going back to rewatch portions again immediately with a different track engaged tells me they are basically the same and of equal quality. The biggest noticeable and consistent difference is that the Theatrical subtitles drop the honorifics on names.

I don’t recall a release recently being packed with so many extras in the way of promos, trailers, etc. Fans should like this for sure.

Evangelion:3.33 You Can (Not) Redo is breathtaking, awesome visual entertainment with wicked sci-fi action. There’s nothing here that fans of this franchise won’t like, except terrible mastering on the 5.1 mixes for the soundtrack, which is truly disappointing.

Evangelion:3.33 You Can (Not) Redo (TheaterByte Blu-ray Review)
3.6 / 5 TheaterByte Rating
{{ reviewsOverall }} / 5 User Rating (0 votes)
Studio khara/FUNimation EntertainmentStudios & Distributors
Anno HideakiDirector
Anno HideakiWriter
106 Mins.Run Time
$34.98MSRP
2 February 2016Release Date
2.35:1Aspect Ratio
AVC 1080pVideo
Japanese Dolby TrueHD 5.1 | English Dolby TrueHD 5.1Audio
TV-14TV Rating
English (Home Video) | English (Theatrical)Subtitles
The Creative Content
The Video
The Audio
The Supplements
Summary
Evangelion:3.33 You Can (Not) Redo is breathtaking, awesome visual entertainment with wicked sci-fi action that may not progress the characters much, but compensates with its sheer spectacle. This Blu-ray only suffers by what can only be a mistake with the mastering levels on its two 5.1 mixes.
What people say... Login to rate
Order by: