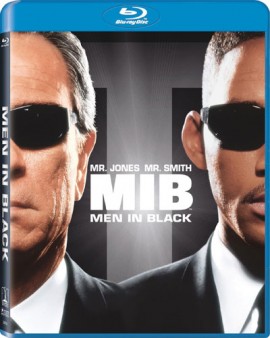 Purchase Men in Black on Blu-ray at CD Universe

Director Barry Sonnenfeld’s 1997 special effects extravaganza Men in Black may not have quite the same impact as it did fifteen-years ago, but it is still an enjoyable comedy actioner. Based on the comic book series, the film acts as a vehicle for Will Smith (I, Robot; Hancock) and Tommy Lee Jones (The Sunset Limited; The Company Men) telling the story of an NYPD officer (Smith) who gets pulled into the covert group, MIB after chasing down a suspect who turns out to be an alien. Recruited by the group who helps keep the existence of aliens on Earth a secret and partnered with the gruff veteran, Kay (Jones), the officer is given a whole new identity and codenamed Jay. The two uneasy partners quickly find themselves in an intergalactic incident and rushing to save Earth.

A deadly alien bug (Vincent D’Onofrio) has come to Earth and killed a member of royalty from another planet in his search for a powerful energy search known as “the galaxy.” If Kay and Jay don’t find the the galaxy and return it to their rightful owners, the planet will be destroyed.

A generally strong transfer, this AVC/MPEG-4 encodement from Sony does a rather decent job presenting the 1997 vintage 35mm Eastman EXR 100T 5248 and EXR 200T 5293 source. While overall detail is strong with medium to high contrast and good foreground texture and detail, there are a few places where grain looks a bit rough and backgrounds are soft, particularly whites and clouds, that tend toward a little instability and grittiness.

Men in Black‘s Dolby TrueHD 5.1 soundtrack is excellent. Explosions completely fill the soundfield while low frequency extension give them a hefty amount of “boom.” Panning across the front is aggressive and the entire mix has a wide dynamic range. Highs are clear and natural and dialogue is clean.

While upon initial glance, MIB looks to be loaded with extras (and certainly three audio commentaries doesn’t hurt), much of the material is ported over and in standard definition, a definite thumbs down there. There are also a few features, also in SD, like the storyboard comparisons and galleries, that seem to unnecessarily use BD-Java for an “interactive” experience where something more straightforward would have worked just as well if not better.

Deadpan humor and allusions to 1950s and 60s creature features make Men in Black an appealing, special effects action flick powered by the likability of lead Will Smith counteracted by the straight-laced Tommy Lee Jones. The Blu-ray is a good but not perfect effort from Sony.