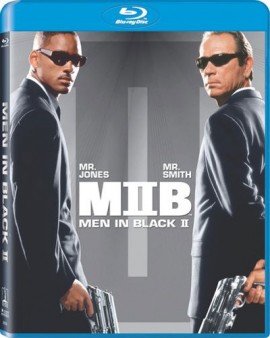 Purchase Men in Black II on Blu-ray at CD Universe

With Men in Black III about to hit theatres, in 3D no less, one can only hope that time does indeed wound all heels, or however that goes. This 2002 sequel to the 1997 comic book inspired blockbuster was a real disappointment. It’s not that Men in Black itself was a work of pure genius, but its effects, comic appeal, and action were an enjoyable ride. Men in Black II, regrettably, had a bad case of the sophomore slump.

Tommy Lee Jones and Will Smith are back in their roles as Kay (Jones) and Jay (Smith) for another round of alien hunting and planet saving in a plot that nearly mirrors the one from the previous film, only not as good and with more over-the-top special effects. But, wait, didn’t Kay have his memory wiped and get “retired” after the first film? He sure did. That’s why this time around, buried deep in his memory is the key to where a powerful alien power source known as “the light” is hidden (sound familiar) and he must be brought back into the fold, have his memories restored. He must rejoin Jay to find the light and keep it from falling into the hands of a deadly squid/plant-like alien named Serleena (Lara Flynn Boyle) in the sexy form of a Victoria’s Secret model who has returned to Earth in search of it.

While the visual effects are certainly top notch and possibly hold up even better today than the initial film’s, the mood and plot are all off in this tiresome retread. It works too hard to recapture the original energy that made MIB work and never succeeds.

While MIB II looks just a tad more consistent on Blu-ray than its predecessor with stronger detail, better blacks and cleaner, brighter whites, one issue I have with it are the flesh tones, which, to my eyes, look a little too reddish. Other than that, I can’t really complain. For a 10-year-old 35mm source, this AVC/MPEG-4 encodement looks darn good.

As to be expected, the DTS-HD Master Audio 5.1 soundtrack is a reference quality home theatre experience that can show off any setup’s capabilities. The lows are resounding, the surrounds are engaged pretty much throughout the film, the mix is well balanced and dialogue is clean.

Sometimes I wonder why bother with the shiny new packaging and the premium that is charged for these high definition releases and all the “extras” when in fact the studios aren’t including any new bonus materials in HD. In fact, MIB II doesn’t even include a DVD, but it does have the ,uch maligned UltraViolet digital copy included.

Stick with MIB, skip MIB II entirely, and, if you’re courageous, hope that MIB III can reinvigorate this, now aging, franchise. With that being said, this Blu-ray release is a more that solid catalogue release that is most definitely reference material.