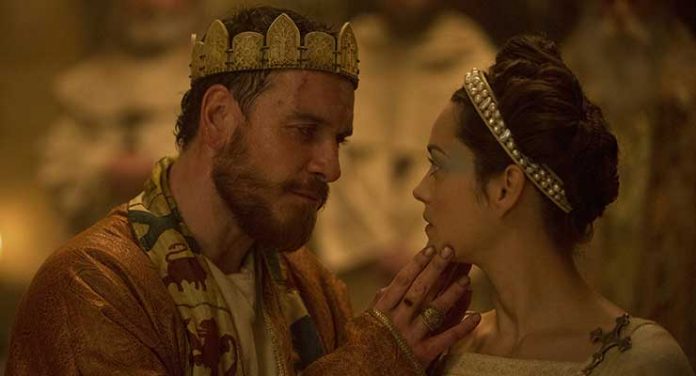 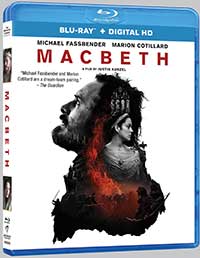 Director Justin Kurzel provides us a visually stunning screen adaptation of one of, if not the most famous of Shakespeare’s tragedies, Macbeth. Not unlike the gritty look of HBO’s Game of Thrones, Kurzel’s Macbeth, shot on location in the windswept world of Scotland, is a desaturated and blood-soaked production that lurks in the realms of death from the opening, beginning with the funeral of Scottish general Macbeth’s (Michael Fassbender, Steve Jobs) only child, his infant son. We then move to the bloody battlefield where Macbeth leads an army against the traitorous Macdonwald (Hilton McRae) leading hordes of invading Norsemen. On the battlefield, Macbeth sees three fearful women, presumable witches or soothsayers, who foretell that he will become king of Scotland. After telling this

to his wife, the Lady Macbeth (Marion Cotillard), she encourages Macbeth to act swiftly to secure the prophecy, urging him to kill King Duncan (David Thewlis) that very night to take the crown. And he does just that, in one of the most merciless Macbeth assassination scenes put to film. Of course, this will be only the first of many deaths at the hands of the Macbeths to keep the childless couple’s grip on power, which will eventually lead to their increasing guilt and downfall.

Kurzel’s Macbeth is relentlessly cold, calculating, and bloody. He uses the visual aspects to great effect, often tinting the screen bloodshot to further evoke the spilling of blood. And Fassbender’s Macbeth is brilliant, going from the assured warrior to the increasingly violent and paranoid mad king ready to kill even his closest friends to secure his place at the top. And where Fassbender’s portrayal is riveting, Cotillard and Lady Macbeth, may be the real revelation here. The French actress, an unusual and bold choice for the role, is truly brilliant. Devious, manipulative, and in the end vulnerable, guilt-ridden, and insane. She is a master of subtlety and, perhaps most surprisingly given she is French, able to articulate Shakespeare’s intricate phrasing more clearly than Fassbender at times.

Macbeth was shot in HD at 2.8K resolution on the Arri Alexa XT Plus camera and arrives on Blu-ray from The Weinstein Co. and Anchor Bay Entertainment in a beautifully rendered 1080p AVC encodement. The desaturated, gritty and often crimson-tinted imagery looks crisp and filmic at every turn with crisp detail and no issues with macroblocking, video noise or compression errors.

We get an atmospheric English DTS-HD Master Audio 5.1 soundtrack that is subtle, but effectively highlights the moody score from Jed Kurzel while placing the character dialogue upfront and center.

The included “making of” can be passed over, but the twenty-minute-long Q&A with Mr. Fassbender filmed in New York City in 2015 provides some interesting insights.

Kurzel’s use of brutality throughout his Macbeth gives the drama an immediacy and visceral appeal while Fassbender’s portrayal of the title role is an emotional juggernaut, not to be outdone by the even more heartbreaking and riveting portrayal of Lady Macbeth by Marion Cotillard. While the film can sometimes be a little overbearing in its melodrama, this is certainly a Macbeth to set a new modern standard for the play on film.