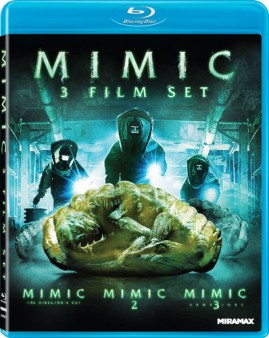 Mimic tells the story of a disease carried by a common cockroach in Manhattan. In an effort to stop the epidemic, entomologist Susan Tyler (Mira Sorvino) creates a mutant breed of insects that secrete a fluid to kill the roaches. Also issue is that Tyler engineered the breed to die after one generation and, obviously for sake of a film plot, the little critters have not died. Now, it’s up to Tyler to figure out how to stop these mutant monsters before the human race suffers.

Mimic 2 tells a story that mimics (pun intended) the original film. Taking place four years after the 1st film, the group of insects that once threatened New York City are dead. Or so we thought. It turns out a few of these rascal bugs have survived, this time having undergone a terrible transformation into something no one saw coming.

Mimic 3: Sentinel is the story of the “Judas” bugs found in the second film. This time around, the bugs are attacking random inhabitants of an apartment complex. Clearly not wanting these insects to run amok, it’s now up to a group of citizens to exterminate these dreadful enemies. It’s by this point that even after the somewhat decent second film, the series and concepts have been stretched way too far.

In all reality, outside of the first film, the Mimic films just aren’t solid movies in the slightest sense. In fact the only aspect of the original that is even worthy of recommending it to anyone, is the fact that Guillermo Del Toro directed the movie. Yes, he’s gone to FAR, FAR better efforts (I’d say Pan’s Labyrinth is his best); however, it was nice to see where Del Toro began his career. The other two films are horribly bad. Kind of the so bad that you keep looking at your watch just begging for time to move forward, so you can escape from this torture. The plots are basically recycled from the 1st film, just lack any sense of horror, any sense of quality. I do suppose if you want to see the latter two and don’t own the original on Blu-ray yet, this may be worth a glance. Otherwise, just buy Mimic by itself.

The 1:85:1 framed, AVC/MPEG-4 encoded transfers are fairly strong throughout. The films, while generally featuring darker sequences, do hold a good amount of detail. In particular, the first in the series, has a few moments where detail does pop off screen. It’s during these scenes that the transfers do seem impressive; however, the very next scene is questionable. Of question is the contrast levels. I’m not sure if this was a stylistic decision or what not, but contrast levels seemed somewhat dull and lifeless. The film’s color palettes do use nearly all the ranges of colors throughout the three films. Color-wise, I’d say the third film in the series (Sentinel) has more well lit moments, resulting in finer detail, accurate contrast levels and, for the most part, a more solid presentation. In all reality, none of the images really are that impressive, more they just do their jobs with adequate results.

The film’s provided DTS-HD Master Audio tracks far better than the aforementioned video transfers. Dialogue throughout all three presentations is solid via the center channel. Dialogue is easy to understand, never becoming muddled. Atmosphere has the greatest quality via the 1st film’s 7.1 offers versus the 5.1 offerings for the second and third films. It’s during the 1st film, that the sense of true quality (i.e. higher budget) comes into play. Of note, little discrete effects like the skitter of the bugs moving, kind of creates a truly creepy, downright effective presentation. The latter two films do offer up atmosphere, just not as robust and dynamic as the original. Effects are present, just not as impressive. LFE is fine across all three films, serving up deep, immersive bass. All in all, the first film (4.5/5) offers the best aural experience, while the other two (both 3.5/5) offer tracks that will just get you through the films.

The included supplements are presented in SD:

Outside of the original film, the latter two Mimic movies are dreadfully bad. While it’s nice to see Lionsgate include all three movies here for a low MSRP, I can’t  recommend this collection based on the quality of Mimic 2 and Mimic 3.