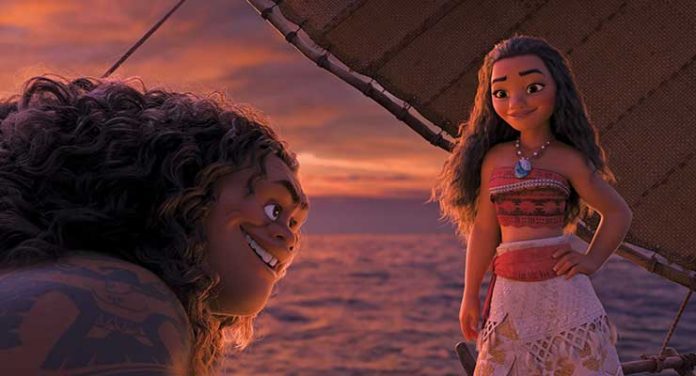 Disney’s latest animated adventure Moana unveils a new princess for their canon and this time she’s a restless Polynesian seafarer from 3,000 years ago who must enlist a demigod to help save her people.

Moana (voiced by Auli’i Cravalho) is the daughter of a chief on a Polynesian island named Motunui. She’s being raised to one day succeed her father as the leader of her people, but with one steadfast rule – never travel beyond the reef surrounding the island. The problem is, Moana has been drawn to the ocean ever since she was little and when an ancient curse begins to threaten the island, she takes it upon herself to venture beyond the reef. Following the encouraging words of her grandmother, Moana goes out alone with a boat beyond the reef to find the demigod Maui (voiced by Dwayne Johnson) to seek his help in finding an ancient jewel he supposedly stole according to legend that brought the curse down on the Polynesian people. The pair eventually head off on an adventure across the seas confronting a number of sea creatures, face down danger of all sorts.

Moana is arguably one of the most engaging Disney princesses to come along in a while. Setting the story in the ancient Polynesian culture infuses the story with a freshness a Disney film hasn’t seen perhaps since Mulan, and like that film, this is a headstrong princess who takes the reins of her destiny rather than sitting around waiting for her prince charming to come along and marry her into happiness.

The banter between Moana and Maui is a big part of what makes the film a success. They fuss and row like a big brother and little sister. It’s funny and charming at once. The film is also infused throughout with the beauty of South Pacific in the gorgeous cerulean seas, the constantly shifting scenery of verdant islands, underwater paradises and bejeweled night skies that dazzle our eyes even if, at times, the story begins to lag just a tad. But, just when the story does slow, it is often saved by the fantastic music of Mark Mancina, Lin-Manuel Miranda of Hamilton fame, and Opetaia Foa’i of the South Pacific band Te Vaka. The musical contributions, particularly of the latter, add an extra layer of authenticity that make Moana a thoroughly engaging and enjoyable film to take in for kids and adults alike. 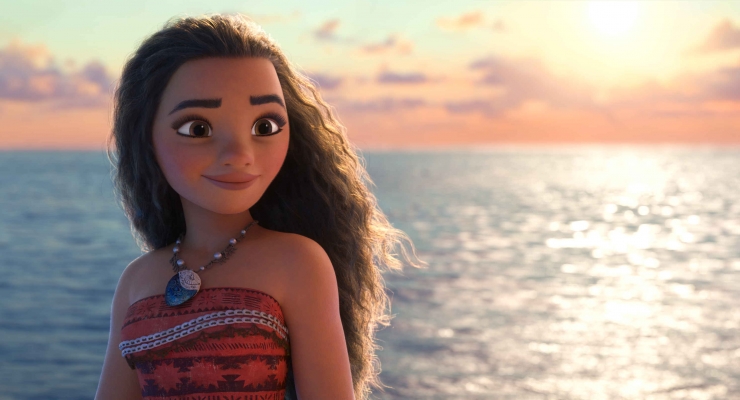 Moana is an original 3DCG digital animation production that comes to Blu-ray 3D from Disney in a 2.40:1 MVC 1080p encodement. The 3D image as viewed on my OLED display was nearly flawless with an excellent depth of field, extremely limited crosstalk, and colors that still looked quite vibrant. When Moana stuck the boat paddle out at Maui to get him on her boat, it showed strong ‘pop out’, but not the kind that made you think it was going to poke your eye out. Naturally, the 2D disc looked a little brighter, crisper, and completely flawless. In summation, this entire release is reference quality whether you want to watch in 3D or 2D.

Moana has a superb English DTS-HD Master Audio 7.1 mix that is finely balanced and deeply extended in the low end without overdoing the LFE to the point that it becomes obnoxious. The sounds of the ocean can become almost thunderous when necessary, but the mix can also sound delicate and, of course, musical and “airy” with good midrange punch and dynamic range during the musical performances. There is a good spread of solid effects throughout the surround channels and dialogue and vocals are clean.

This set is stuffed with over an hour of extras including the wonderful theatrical short Inner Workings, the Maui mini-movie Gone Fishing, and a plethora of ‘making of’ featurettes and deleted scenes. Many of the extras listed below are quite self-explanatory.

Disney gives us another animated classic and a new lovable princess for modern sensibilities with the beautifully animated and wonderfully scored Moana. The story is full of heart as well as having a strong moral at its core for younger viewers. The 3D and 2D Blu-ray Discs are top-notch reference material and the set is packed to hilt with extras.