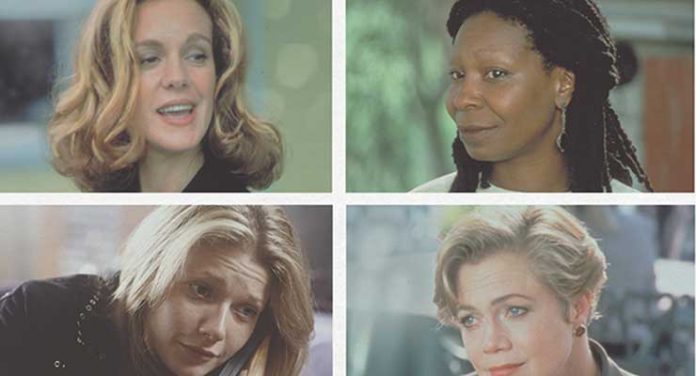 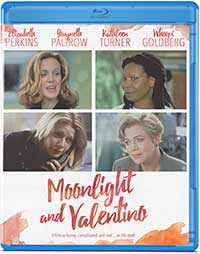 Moonlight and Valentino is one of those forgettable romantic comedies that is more notable for its ensemble cast of fine actors than the actual strength of its story. It also happened to have a screenplay penned by Ellen Simon, daughter of famous playwright Neil Simon, based on her play. The film’s notable ensemble cast includes Elizabeth Perkins, Whoopi Goldberg, Gwyneth Paltrow, Kathleen Turner and rocker Jon Bon Jovi.

The story revolves around recent widow Rebecca (Perkins) whose husband was unexpectedly run over by a car and now she refuses to come to terms with the prospects of being alone. In fact, she doesn’t even want to be called a widow, or “the w word” as she puts it. She finds herself surrounded by a group of women who try to comfort her, but have their own problems, mostly with men, that need addressing. Her close friend and next door neighbor Sylvie (Goldberg) fears her husband wants to leave her because their marriage is cooling, her former stepmother Alberta (Kathleen Turner) who is a busybody, and her younger sister Lucy (Gwyneth Paltrow) who is depressed, cynical and unable to commit to relationships. Eventually Rebecca finds love again in the form of a hunky younger man (Bon Jovi) who is hired to repaint her house.

Frankly, the film is riddled with clichés and opts for too much charm over substance. For someone who is meant to be so tortured over the sudden death of her husband, Rebecca doesn’t ever seem so torn up, Perkins plays her more as mildly eccentric and annoying. The surrounding women with their own problems that are meant to be on the same level as Rebecca’s are just ridiculous. No, Sylvie, your slowly deteriorating marriage is not the same as someone suddenly losing their spouse to a freak car accident.

I never saw Ellen Simon’s play on the stage, but if her screenplay for Moonlight and Valentino is any sign of how good she is as a writer, I’d say she is a long, long way from catching up to her father.

Given its over twenty-year-old vintage, Moonlight and Valentino looks good in this AVC 1080p encodement on Blu-ray from Olive Films. Source damage is very slight, the film grain is thinly layered, colors look natural and vibrant for the most part and film softness is minimal.

We get a pretty straightforward but quality DTS-HD Master Audio 2.0 stereo mix of Moonlight and Valentino. It won’t set your front L/R mains alight, but it offers good, clean dialogue and effortless bits of sound effects.

This is a barebones release with no extras, not even a trailer.

Moonlight and Valentino is just your average comedy/drama aimed at the female market, or, more precisely, pandering to the female market with very subpar writing about boys, great butts, and how to please your man with kinky sex. While it tries to veil itself as something intellectual, it really isn’t.