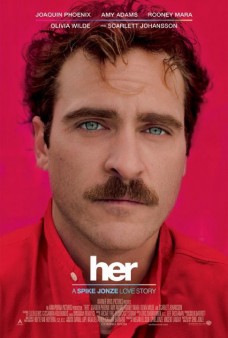 Theodore Twombly is in love with a woman he hasn’t even met. All the more bizarre is that the woman is not even an actual human being, she is an Operating System. This is the premise of the new film Her.

Twombly (played by an excellent and almost unrecognizable Joaquin Phoenix), recently divorced, fortyish, and obviously very lonely, is an expert ghostwriter (letter writer number 612 in his company) — people hire him to write personal handwritten letters to their loved ones. Set in a futuristic Los Angeles, Twombly’s life revolves around work, and his fascination with technology, which has him purchasing the latest gadgets with the most up to date systems. This includes his purchase of a new Operating System that is connected to both his computer and to his phone. However, this Operating System is not just a monotone voice with no personality (similar to Siri on Apple’s iPhone), it is a voice that appears to be specially made for him, a voice that he chose to be a woman. It becomes a very sexy female voice, whose name happens to be Samantha (the voice of Scarlett Johansson). In a world of futuristic-looking buildings and a lack of personal interaction, Her takes our relationship with technology (and specifically phones) to a whole (scary but perhaps realistic) different level. Twombly is longing, perhaps hopelessly, to connect with that voice and hopefully with the person behind that voice. He is slowly falling in love with that voice, a voice that deep down he knows is just a voice. He tells Samantha his innermost thoughts, and starts telling people that he is in a relationship with Samantha. He even tells Samantha that “you helped me discover the ability to want.” But all Samantha is, is the voice of a portable gadget and his computer. 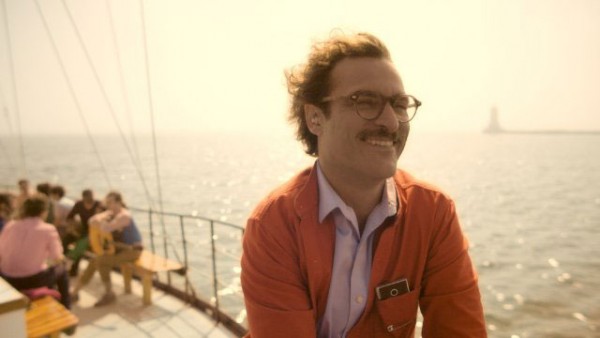 In a world where everything is really nice, very clean, beautiful, and bespoke, Her messes with the idea (perhaps correctly) that we are all getting too dependent on our phones or laptops/tablets/desktop computers, that we are now living our lives this way – talking, texting, socializing, falling in love – all done via computerized technology. But Her goes one extra step in that Twombly is actually in love with not just his phone but with the voice inside that phone. And he is not the only one. His upstairs neighbor Amy (Amy Adams) is also getting caught up in a relationship with the Operating System left behind by her estranged husband. And it may appear that Twombly and Amy would make a perfect couple, they both seem to be so disinterested in actual human interaction and exclusively infatuated with their Operating System voices. This proves just how strangely connected they are (and perhaps so are we) to technology.

Jonze has directed four movies in the past 15 years, and Her is the first film that he has written on his own. He wrote it three years ago over a long New York winter. Some of Her was shot in Shanghai which has new skyscrapers and raised walkways, perfect for Her to show how people are in such a crowded city yet strangely disconnected from each other. And as an added backdrop to the making of Her, Samantha Morton originally recorded the voice of Samantha, but in post production Jonze felt that Morton’s voice didn’t resonate the way he wanted it to. So he went with Johannson, who has perhaps one of the sexiest female voices in Hollywood.

Phoenix, who off screen has a very strange and somewhat interesting reputation, originally felt that he was wrong for the part of Twombly, but his physical appearance in the film — glasses and mustache — makes for nerd territory, so we can believe that a man like him, who appears to be unable to date in the ‘real world,’ would fall for a voice as sexy and romantic as Samantha’s. Phoenix takes his acting to whole different level in this film, as most of the time it is just him (and ‘her’) talking to each other. He was very good in his last film, The Master, but in Her he is excellent.

Yet when Her was over, I somehow felt empty, alone, and disappointed. During the film I felt like I was part of the relationship, a part of a ménage à trois, but not allowed to express my emotion, my feelings. And that is what Her does to the viewer, it leaves you unsatisfied, like a lover who only enjoys foreplay but does not take it to the next level.