There have been many movies and TV series made about the infamous Colombian drug kingpin Pablo Escobar, but was arguably as enthralling and complete as one of the latest Netflix Original series, Narcos.

Produced by Gaumont Television and starring Brazilian actor Wagner Moura (Elysium) in the lead as Pablo Escobar, Narcos tells the true story of Escobar’s violent rise to control the Medellín drug cartels, his bloody battle against the Colombian government in their efforts to extradite him to the United States to face drug trafficking charges, and the two DEA agents, Steve Murphy (Boyd Holbrook) and Javier Peña (Pedro Pascal) sent down to Colombia to apprehend him.

Shot entirely on-location in Colombia and using a cast made up of actors from across Latina and South America, mostly unknown to the US, Narcos is unrelenting in its commitment to authenticity and the visceral violence that often plagued the people of Colombia during the ‘80s thanks to Escobar and his minions. Moura, in a powerhouse performance that earned him two Golden Globe nominations, actually learned Spanish specifically for this role (the native Brazilian speaks Portuguese as his native tongue and English).

Director José Padilha is able to sculpt an intensely addictive and suspenseful 10-episode story arc that, even if you are familiar with much of Escobar’s story – the bombings, the shootings, the “Club Medellín” prison – is still binge-worthy, mostly thanks to the strong writing and character development. Escobar and the people around him are portrayed more than simple villains, but as complex human beings that are motivated complex emotions. At least from an artistic perspective, it goes a long way to understanding the world of Escobar and Medellín, and given that Padilha has stated he did a vast amount of research to be able to direct this series based on reality, we can assume that much of what we see as motivation could very well have been true. 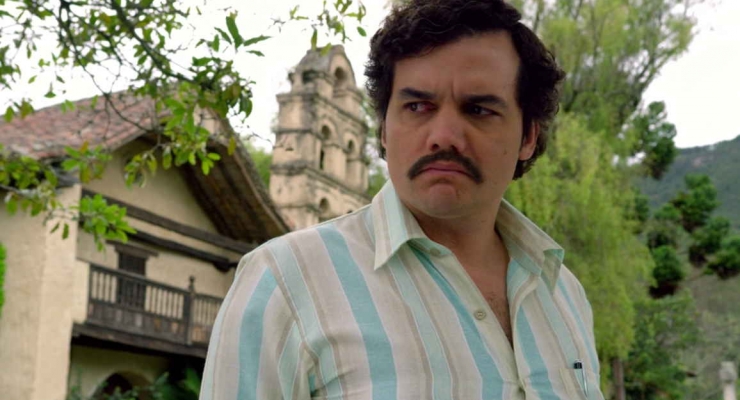 Narcos was shot on the Red Epic Dragon in 5K resolution and brought to Blu-ray in an AVC 1080p encodement from Lionsgate. The transfer looks immaculate with a pristine image, even as the series itself is sometimes prone to grittiness with the detritus of the forest and dusty roads often filling the air during shootouts. Contrast and nuance are excellent even of the overall palette doesn’t leap from the screen due to the bland, earth tones.

Narcos comes with a bilingual English/Spanish DTS-HD Master Audio 5.1 that is wonderfully balanced and full of rich atmospheric sound effects that are well placed throughout the soundstage. We hear the sounds of the Colombian jungle, the breezes blowing through trees, and of course gunfire and explosions all anchored by a hefty low end. Dialogue is clean and intelligible.

We get three excellent commentaries plus some interesting featurettes that explore the making of the series with interviews from the cast and the crew. Particularly interesting is The Language Barrier that explains how the actors from across South America and Latin American cultures had to work to unify their accents and dialects.

Season 1 of Narcos was spectacular. I finished the first time through in two days and the second time in one, it’s that good. It ends where most people probably remember the most of Escobar, his infamous self-built Medellín prison. It’s open-ended, but that shouldn’t stop you from enjoying this immersive, gritty experience. The Blu-ray release from Lionsgate is top-notch.