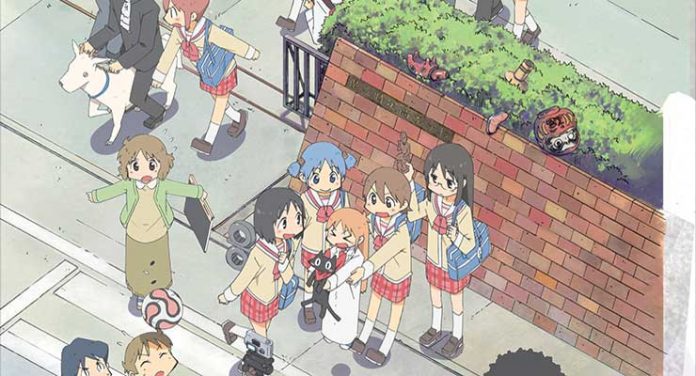 This 2011 anime series, known as Nichijou (日常) or “Everyday” in Japan and My Ordinary Life in North America is based on the Japanese comedy manga series written and illustrated by Arawi Keiichi. A slice-of-life series that is often more absurd than straight up funny, the hilarious series can probably most closely be compared to Lucky Star, Strawberry Marshmallow, and Hidamari Sketch, being closest to the latter, only more absurd.

The series follows the lives of three high school girls, the lazy Aioi Yūko, the cheerful Naganohara Mio whose distinguishing feature is the two wooden cubes she uses in her hair to tie her pigtails, and Minakami Mai, the quiet, intellectual of the group who often gives Yūko a hard time. Meanwhile, down the street lives a pint-sized scientist, Hakase who built herself a life-life android she’s called Shinonome Nano. Nano wants nothing more than to be treated like a real girl and to go to high school, but Hakase has built her with a giant turnkey in her back that she refuses to remove. And, oh, they also have a cat that can talk thanks to a red bandana that Hakase puts around his neck.

There’s no real story, per se, in Nichijou, but there’s an ongoing string of near stream of consciousness gags that make the series nearly impossible to stop watching, and the surrounding characters are funny as well. For instance, there’s Sasahara Kōjirō who dresses like an aristocratic dandy, speaks like a snob, acts like he’s rich, and rides a goat to school everyday, but in fact he comes from a family of hardworking, not so wealthy farmers. The problems that the girls face everyday amount to everything from watching the principal have a near deadly wrestling match with a deer to an out of control piece of calamari that stretches the three-second rule to its limits.

The animation style falls into the traditional moe style for these sorts of female—oriented slice-of-life series, and the characters are drawn consistently and often whimsically fitting the mood of the gags and vignettes, the latter of which there are many. I particularly like the jump-rope segments featuring nameless men with egg-shaped heads that populate the series’ numerous inter-sequences.

Since writing about the how funny this series isn’t really the nest way to convey just how hilarious it is, I recommend to everyone to watch it and find out firsthand. 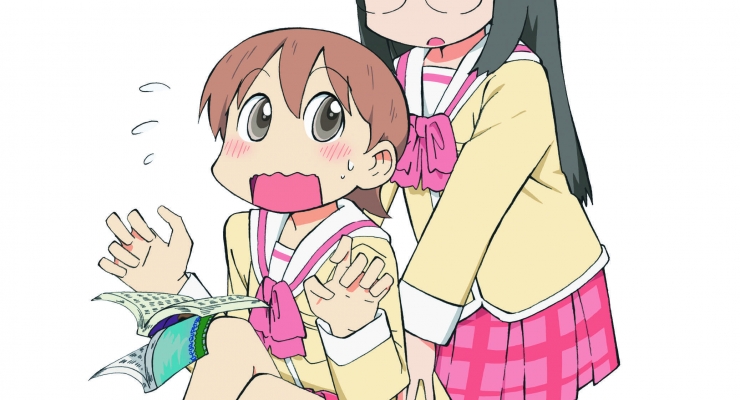 Nichijou arrives with an AVC 1080p encodement framed at 1.78:1. It is a native HD production and it does look as such, although there is a bit of overall softness and the pastel color palette doesn’t exactly leap from the screen.

This is one of the few Funimation releases that does not come with a dub, so only the original Japanese-language soundtrack is provided in Dolby TrueHD 2.0 stereo. The mix is good given the sort of series this is, offering up clean dialogue, little issues with lip synch, and decent if not staggering dynamics and stereo effects. The voice cast do a bang-up job with their characters and the comedy.

The supplements aren’t much outside of the usual textless opening and closings, although this series does offer a lot of variations, so we do get a lot more animation there. We also get the full “Episode 0” Nichijou OVA.

Nichijou: My Ordinary Life is a hilarious slice-of-life series that ranges from the cute to the absurd, all wrapped in a nicely animated package. Although this 7-disc set is light on extras, the “Episode 0” OVA is a welcome inclusion and the Combo Pack set is well worth owning.