The mid-eighties was the beginning of the end of the Cold War, Ronald Reagan was president, films like Rocky IV and the Rambo movies pitted the “good” Americans against the “evil” Soviets, and in the midst of that Hollywood hype came Red Dawn. I distinctly remember watching the film one summer at my cousins’ place on a rented Laserdisc, maybe a few years after its release and it still seemed plausible in my teenage mind that a Soviet invasion in the Midwest could happen.

Of course, this ‘80s ‘Brat Pack’ film that cast Patrick Swayze (Road House), C. Thomas Howell (The Outsiders), Lew Thompson (Back to the Future), Charlie Sheen (Platoon), and Jennifer Grey (Dirty Dancing), amongst others, as a group of Midwestern high school kids who take up arms against a Soviet invasion force working alongside Cuban and Nicaraguan military who invade through Mexico and a disguised commercial airline flight loses credibility on a number of fronts. Not that an invasion by Soviets, or anyone, couldn’t possibly happen, but that in its eternal quest for the Fountain of Youth, Hollywood seemed to have forgotten in Red Dawn that anyone outside of teens even existed. The adults are either all so elderly they are incapable of fighting or they are all captured and killed off, leaving the brave resistance fighting up to the inexperienced kids from the local high school. They manage to hold off tanks, helicopters, and machine gun fire with their hunting rifles and wits.

The film does draw you into its drama of danger and patriotic platitudes, especially given the often-gorgeous cinematography from Ric Waite (Footloose) who captures the outdoor scenery marvelously, giving the film that rugged sense of American individualism the permeates the film. The young cast manage to make the unbelievable scenario believable, and Swayze and Sheen as the two brothers central to the story actually put on a touching performance during the film’s unlikely climactic ending. 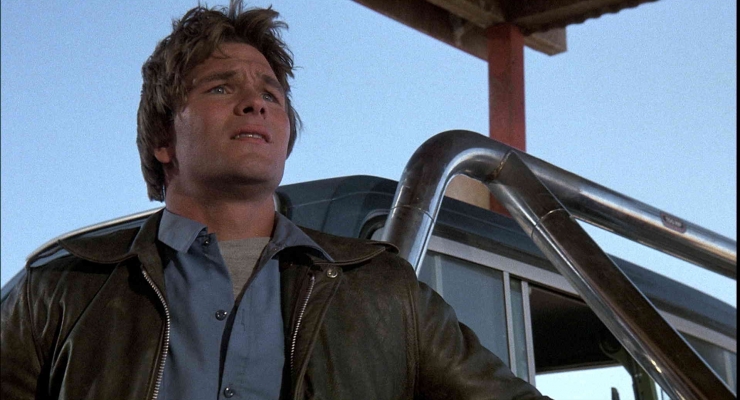 Red Dawn arrives on Blu-ray in an AVC 1080p encodement framed at 1.85:1. From the opening credit sequence it looks alarmingly rough with lots of source damage and coarse film grain. Although the image does recover from this, it never looks spectacular by any means and its obvious that neither Shout! nor MGM have done a major restoration on this film. The depth of field starts to break down and people and objects look rather soft in backgrounds, and one can see a lot of speckling of dust and dirt throughout the film. It isn’t horrendous by any means, but it is certainly not at the top of the pile when it comes to reference catalogue releases.

There’s a 5.1 mix of Red Dawn provided in DTS-HD Master Audio, but by today’s standards it isn’t the greatest sounding surrounding mix in the world. The audio is mainly front-heavy with the same wide stereo imaging in the stereo mix and a lot of added atmospherics throughout the surround channels and low-end in the LFE. The stereo mix in DTS-HD Master Audio 2.0 sounds better balance with very strong and wide stereo imaging, it would be my preferred option for this viewing this film.

The supplements are mostly archival ‘making of’ featurettes except the new hour-long HD documentary feature A Look Back at Red Dawn that features interviews with co-star Doug Toby, casting director Jane Jenkins, editor Thom Noble, production designer Jackson DeGovia and lots of footage from the film. The theatrical trailer is also included.

One of those big B-quality movies out of the ‘80s that has a following because its elements are greater than its whole, Red Dawn has a lot to like even if it is an imperfect film. This “Collector’s Edition” from Shout! Factory under their Shout Select imprint should please fans, even if the video quality is just middling.