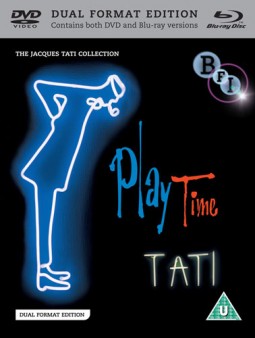 Editor’s Note: Portions of this review not specific to this release were originally published in our review of Playtime [Criterion Collection] Blu-ray Review. 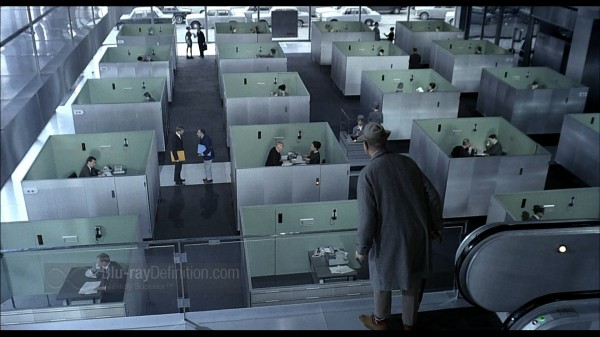 Comedian and director Jacques Tati’s 1967 film Playtime is without a doubt the filmmaker’s most technically accomplished creation of his career. The complex satire on modern life in the post-industrial world was and is a comedic extravaganza that lifts avant-garde cinema to new heights.

Taking years to complete, costs for Playtime would eventually come in at over fifteen million euros and would be a box office failure upon its eventual release in France. The disastrous reception by audiences would bankrupt Tati.

The film’s scarce plot revolves around Tati’s famous character, Monsieur Hulot arriving in Paris to meet with a businessman Monsieur Giffard (Georges Montant). Through a series of miscommunications and technical difficulties, Hulot finds himself wandering through the impossibly complicated glass and steel imbued structures of Paris, unable to connect with Giffard.

Playtime is filled with a number of gags and brilliantly choreographed movements that push the film forward. But, although visually stunning, one thing that seems to go unmentioned a lot when Playtime is spoken of is the jarring yet hilarious soundscape of the modern world that Tati created. Recorded to six tracks, glass doors “pong,” heels clickity-clack, gadgets beep and blip; Tati’s inventive aural landscape was not unlike something Stockhausen might have composed. Speaking of music, every time I have viewed Playtime in recent years, I can’t help but think of Radiohead’s OK Computer.

Tati’s Playtime is a commentary on the failure to connect in the modern world; how the cold landscape of technology we have created around us has not only homogenized our society, but also served to alienate us from one another.  I always think of Thom Yorke’s nihilism and dystopian musings on OK Computer in songs like “Airbag,” or “Paranoid Android” when I see Barabara (Dennek), the young American tourist in Paris, hopelessly drifting through the modern structures searching for the old Paris.

Of course, Tati’s paranoia is tempered in Playtime with his inimitable sense of humour, and there are many wonderful examples of that which satirize the confusion of the modern world, such as the endlessly wandering platter of fish in the newly remodeled restaurant, which seems to never get served to anyone.

Playtime is pure genius. As social commentary, it is perhaps more relevant than ever today in this world of skyscrapers and social media. As comedy, it is even more ageless and timeless. It may have taken time for the true value of this work to be assessed, but genius is often not recognized immediately. 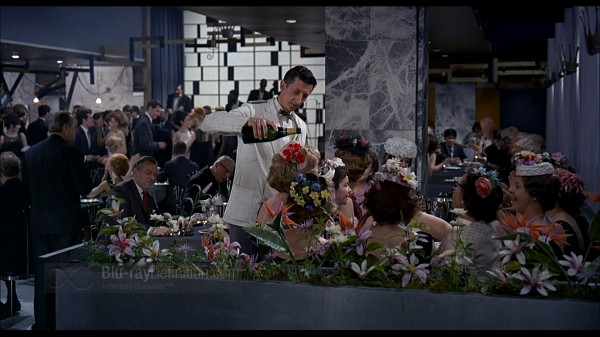 Playtime was originally filmed on 65mm and intended by Tati for projection in theatres equipped with 70mm projection systems. As such, Playtime would be in a very high-resolution film format that, after restoration, would be more than capable of reproducing a stunning high definition image. This release from the BFI, however, uses a 1.85:1 AVC/MPEG-4 encoding scanned from the 35mm reduction internegative of Playtime’s restored 65mm interpositive.  So, although Playtime looks good and film-like, it does not look as good as it possibly could.  I’m not certain why Vivendi would have chosen to use as their master for this Blu-ray release a 35mm internegative, but that is what we have been given.

Surely, there are moments in this transfer where the detail for a transfer of a film this age is astounding, but noise, flicker, jitter, and grain sometimes becomes more pronounced. Don’t get me wrong, these things never reach a point where they are distracting, but they are noticeable at points. Background detail sometimes softens just a tad. One can’t help thinking that Playtime would have been better served being taken from its original 65mm source, rather than a 35mm duplicate.

Still, color reproduction of Tati’s cool, industrialized palette is strong and stable, with flesh tones a bit pale, but as they were intended. Black levels are not absolutely inky, but they are solid and shadow delineation is excellent. Playtime is still not in my opinion, one of the stronger transfers of a catalogue title I have seen from the BFI, but as a high definition catalogue release it is still quite good. 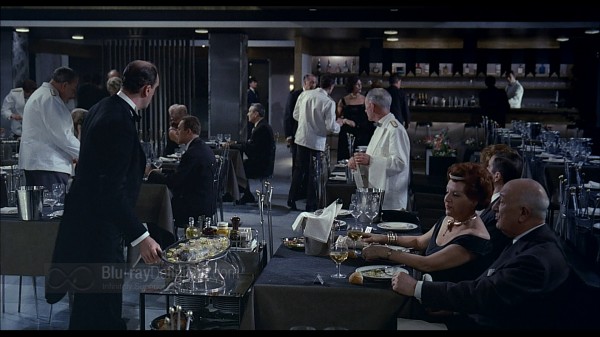 Every bleep, blip, and blurb of Tati’s modern soundscape is reproduced effortlessly on this Blu-ray release, which provides both the original French and International release soundtracks in LPCM 2.0 (48kHz/24-bit). Both versions are nearly identical, with the latter only adding slightly more English dialogue for international audiences. The sound is clean, full, and dynamic with hardly any harshness or crackle. Tati’s original intention was to create an engulfing mix that would be the match of his 70mm vision, and on that Playtime succeeds, with panning of sound effects back and forth, and all manner of inventive sounds to capture the feel of the modern world. This release of Playtime is proof that sometimes two channels can be just as entertaining as four or more. 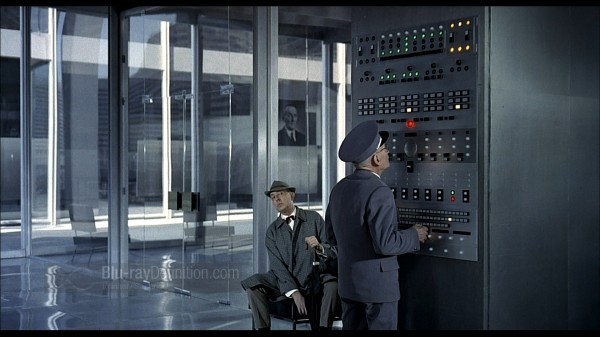 There are numerous documentaries provided delving into the making of Playime as well as the life and career of Tati and f course the exceptional booklet with essay and information on the transfer from the BFI. 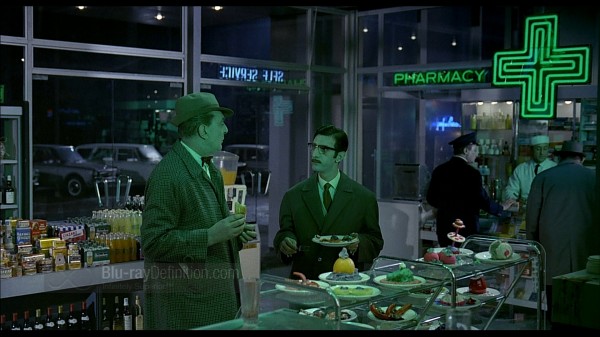 Playtime is indeed a playful film, but its title is delectably subversive. Forty-three-years ago, Jacques Tati gave the world a glimpse of the isolation and chaos that the technological juggernaut could produce in a humorous way. The world had no idea how spot-on he would be; it didn’t know how great a film he had given it either.

This BFI release of Playtime looks above average for a catalogue release, but it is not as good as a 70mm film should look. Regardless, the bonus features and quality of the material make it well worth a purchase. 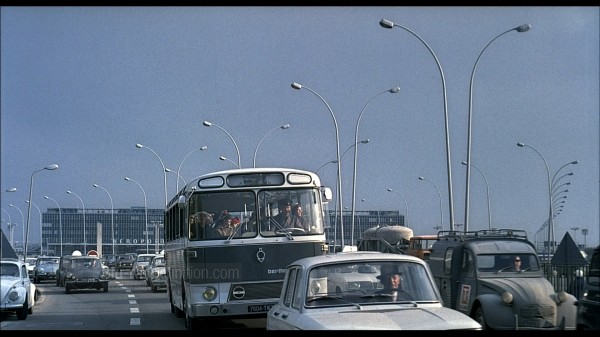 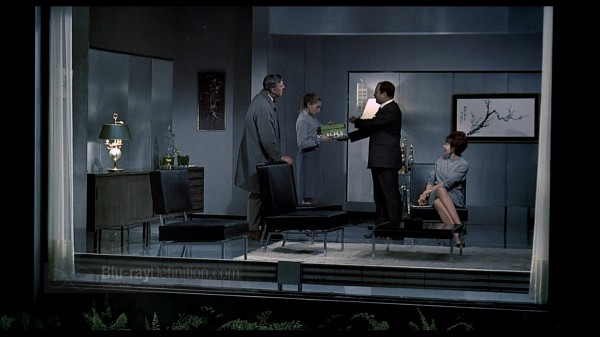 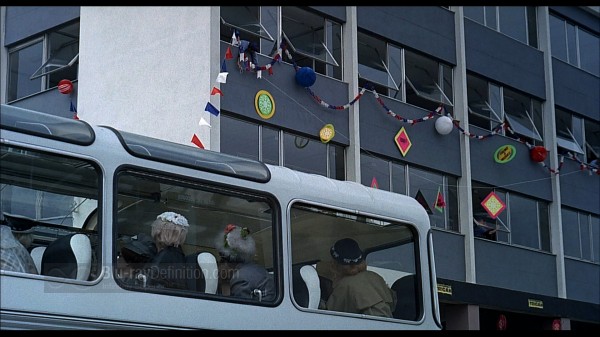 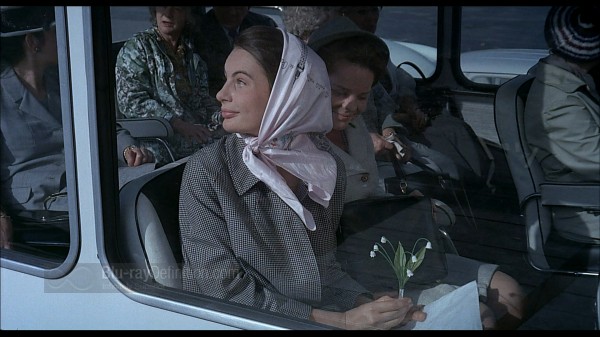