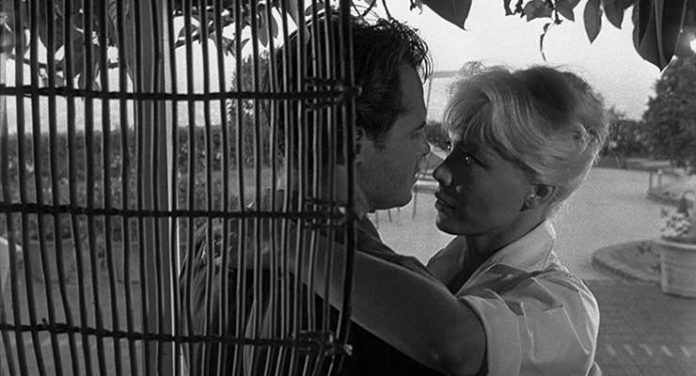 Perhaps it is easy to fall into the trap of looking at Private Property through modern eyes. On the surface the film seems quite subversive, with an undercurrent of repressed early 1960s sexuality and homoerotic nuance between the two male protagonists. Two violent drifters, Duke (Corey Allen) and Boots (Warren Oates), having just robbed a gas station, wander into the idyllic suburbs of Beverly Hills, where the two setup in an empty house across from a well-to-do married couple. Duke, after chastising Boots for never having had sexual relations with a woman, promises to seduce a woman and hand her over to Boots. Duke sets his sights on the flashy, sports-car driving blonde Ann Carlyle (Manx), who we quickly learn is quite neglected by her businessman husband who can barely muster up a “wife noises” to his associate while he’s on the phone as Ann lays out on the couch in an obviously amorous mood proclaiming she’s “ready to go to bed.” Duke is a charmer and when he shows up at Ann’s house claiming to be a gardener, she’s quickly ensnared by his seduction. Tension slowly mounts between Duke and Boots as Boots becomes convinced that Duke is going to keep Ann for himself and not “give” Ann to him. 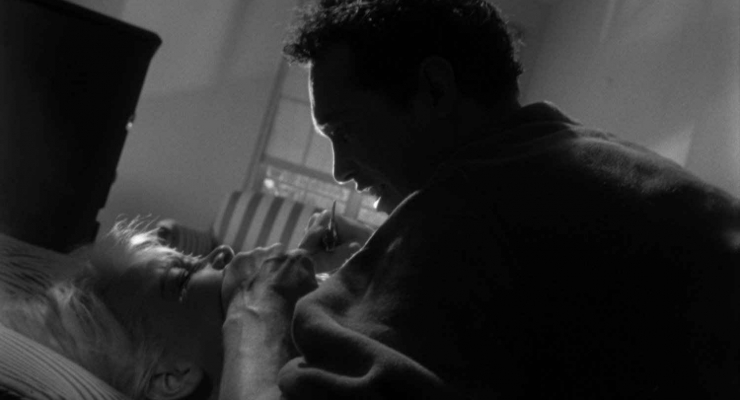 Private Property was restored by Cinelicious in 4K resolution on Cinelicious’ own Scanity film scanner from the earliest known existing element, a 35mm dupe negative that was recently discovered and preserved by the UCLA Film & Television Archive. The scan was then digitally restored frame-by-frame using a variety of tools to remove dirt, scratches, flicker and other damage. While the full aperture elements were completely restored, the film is presented in its original theatrical aspect ratio of 1.37:1.

I was invited to a screening of this new 4K restoration at Lincoln Center’s Elinor Bunin Munroe Film Center in New York City and at the time felt that the new 4K restoration looked breathtaking; like the film had hardly aged, that, in fact, it probably looked imagines almost as good as the day it first ran in theaters, with a beautiful, natural level of grain and wonderful black and white contrast.

This Blu-ray from Cinelicious Pics maintains most of the properties of what I saw back in June, perhaps even looking just a little bit crisper and grainier than I recall. The black and white contrast is still strong, with an mazing level of detail and nuance in the shadows and an absence of crush or clipping. The grain looks natural. The transfer comes in an AVC 1080p encodement at 24Hz.

The monaural soundtrack is supplied in DTS-HD Master Audio 1.0 and it is a lot less boxy and dry than most monaural tracks, especially of this era. The dialogue and audio effects are clean and the balance of the music is good.

There isn’t much included here, but the essay and featurette with still photographer and technical consultant for Private Property Alexander Singer are musts.

An unsettling early 1960s B-noir head-trip that was lost for many years and is now ripe for rediscovery by contemporary audiences, Private Property should be high on the list of cinephiles as a film worthy of reexamination and rewatching. The 4K restoration from Cinelicious Pics looks brilliant.

Editor’s Note: much of this review is reprinted from the review of Private Property’s 4K restoration theatrical run.