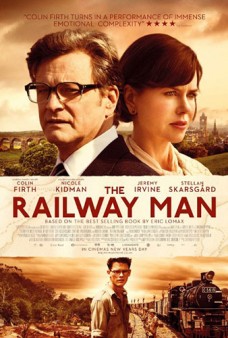 The Railway Man is based on the true story and best-selling memoir by Eric Lomax, a British Army Officer who has a hard time dealing with his war past when he was sent to a Japanese prisoner of war camp in 1942.

Lomax, played by Colin Firth, is a sixty-something man who also happens to be a railroad enthusiast who has collected railway memorabilia all his life. The film begins with Lomax, in Berwick-upon-Tweed, in 1980, doing what he likes to do best since he was a boy, being enthralled by steam trains, and their timetables. On one of the trains, after a connection in Crewe, he sits across from Patti (a beautiful Nicole Kidman), a young recently divorced woman who is on her way up to Scotland. He impresses her with his train knowledge, and they chat then say their goodbyes. He manages to track her down (all too easily) and before you know it they end up getting married (it happens too quickly). After their marriage, Patti notices strange strange behavior from Eric. At times he becomes distant, clams up and wants to be left alone, has nightmares, and has stopped paying the bills, including the rent. Patti tries to get Eric to open up about what is bothering him (post-traumatic stress), but he simply does not (and cannot). Patti goes to speak to one of his friends at the lodge he hangs out in, Finlay (Stellan Skarsgard), who tells him about Eric’s tragic WWII past. 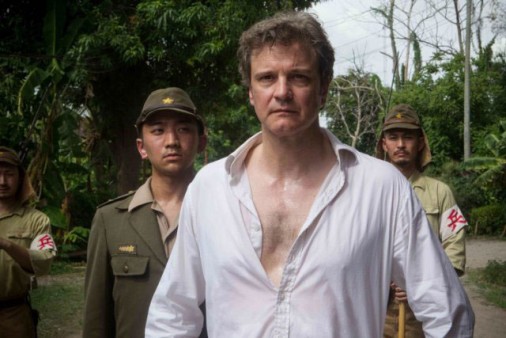 The Railway Man then begins as a new movie, transporting us to 1942 Singapore. Eric, now a young man (played by a very good Jeremy Irvine), is a Signals Engineer with the British arm. Him, along with a few thousand other soldiers, become prisoners of war after the Japanese forces overrun Singapore. We see the Japanese flag go up, and the soldiers get thrown into railway cattle cars to be sent to an unknown location. Once at a prisoner-of-war camp, they are put to work on the notorious Burma Death Railway where men of all ages were forced to break through rock to make the railway, some with their bare hands, at times beaten and starved. Trying desperately to survive, Eric and some of the soldiers attempt to build a radio from various parts collected from within the camp. Unfortunately, they are caught by the Japanese officers and are subjected to beatings, interrogation, and torture. Eric manages to survive all of this, however, the experience leave him physically and emotionally scared for life. Finlay tells Patti that “War leaves a mark.”

Finlay goes on to tell Patti that “You can’t possibly imagine what he’s been through.” She is very inquisitive why there is such a code of silence between these ex-British soldiers, and why they don’t talk about what happened to them in the war. Finlay gives Patti one final bit of information, he knows where Eric can find the Japanese officer who beat him up all those decades ago. She gives this info to Eric, which sets up an expected, and unrealistic, showdown between the two men, at the exact same location. The tortured is now the torturer. 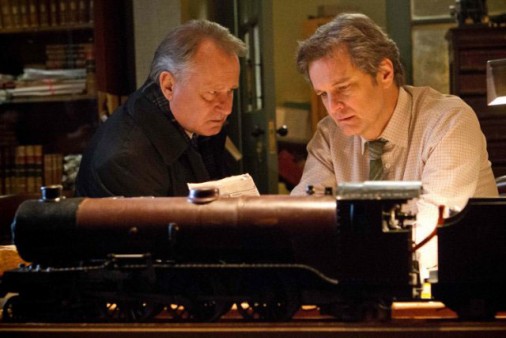 The Railway Man tries to tell a very moving, beautiful and true story, but its attempts to do so fail miserably by director Jonathan Teplitsky. While the relationship between Eric and Patti is a loving one, and the 1942 scenes very realistic in their execution and acting, as a whole The Railway Man is not a great film. Some scenes feel forced, some not natural at all. The filmmakers went to great expense and travel to try to turn Lomax’s book into a film; they went to Edinburgh to visit Eric’s old stomping grounds, they went to his school, his place of work, the bridge where he watched trains go by, they even went to his childhood home, and also to Tokyo to record interviews with Takashi Nagase, the Japanese soldier who tortured Eric during the war. But as a whole, it fails to become the epic film it yearns to be. And unfortunately, Eric Lomax died in 2012, not having been able to see the story of his life on the big screen. He was able to visit the set when they were filming, but perhaps it was best that he didn’t see the movie. Eric had survived the darkest place and lived with it his whole adult life, so why would he want to relive it on the big screen in his old age? The catharsis of this film is that he was able to shake off the bad memories of the war and come to terms with the man who caused him most harm (physical and emotional), and with a great love, who helped him get through life to its natural end.

The Railway Man is a powerful story of love and redemption but will probably get lost with the rest of the award worthy films that are being released now. This one could wait to be watched at your home on Blu-ray or alternatively on a pay channel.