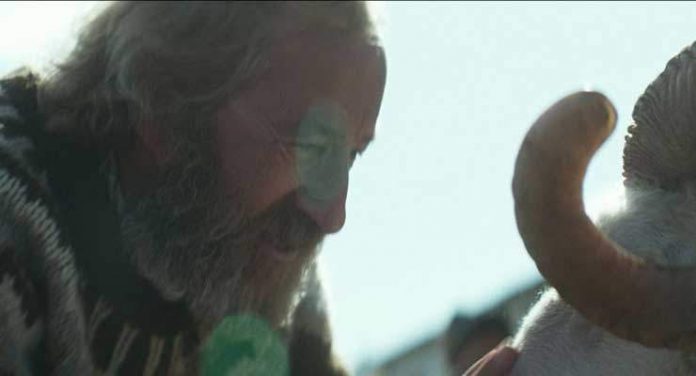 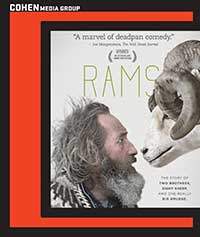 Rams is Icelandic filmmaker Grímur Hákonarson’s taut and sometimes whimsical look at rural life and sibling rivalry in his native country. The film is as stark as the Icelandic landscape itself and at first seems to hold the viewer at arm’s length, but it isn’t long before one is caught up in this strange, quiet world of sheep, rocky pastures, and bitter cold deceptions.

In a rural farming valley in Iceland, Gummi (Sigurður Sigurjónsson) and Kiddi (Theodór Júlíusson) are two older brothers estranged from each other for decades who live side-by-side on their inherited family property tending sheep. Their heritage lineage of sheep is renowned and often wins prizes in competitions. 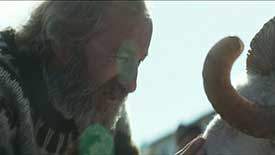 When the lethal infectious disease scrapie afflicts Kiddi’s sheep, putting the entire valley at risk, the local veterinary authorities make the decision to cull all the livestock in the area. This leaves the farmers in a desperate position, with no way to make a living. Most decide to abandon the area, but Kiddi and Gummi decide to stay and fight on, mostly with each other, but eventually against the authorities. Each brother has their own plan to get around the authorities, but first they must overcome the bitterness that lay between them to do it.

Rams is quiet yet brutal in its portrayal of what can happen when grudges are left to fester and also when people have few options left for making a living. The backdrop of rural Iceland is almost like another character in this film – relentless, unforgiving, cold, grey, rocky. It’s like the personalities of the two brothers at the heart of the story and the feud between them. Hákonarson’s direction stays out of the way, avoiding any cumbersome camerawork or fancy editing, and rather allowing the cinematography of Sturla Brandth Grøvlen to linger much the way this film will linger with you even after the credits roll. 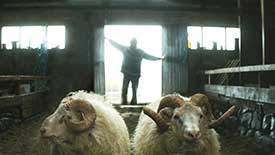 Rams was shot in the anamorphic format in HD on the Arri Alexa and arrives on Blu-ray in an AVC 1080p encodement from Cohen Media Group. The film isn’t one that is going to give you much to really find stunning with its bleak, grey, de-saturated palette, but the clean, crisp image, extended shadow details and filmic appearance are truly reference quality.

Rams gets an Icelandic DTS-HD Master Audio 5.1 mix that is a master class in subtlety. It suits the low-key nature and setting of the film, with only the occasional really solid sound effect standing out, like the loud rumble of a truck that pans across the front and off into the right surround speaker. There’s also a scene where the wind kicks up and the breezes sweep around all the channels. Mostly, we get very subtle sounds and atmospherics, like the cry of the sheep in the distance. Dialogue is clear, but a tad dry.

A poignant film that demands a few watches, Rams is a subtle, yet detailed and charming film that is remarkably in touch with the realities of human existence. If the first viewing doesn’t get you, a second or third will have you engrossed.