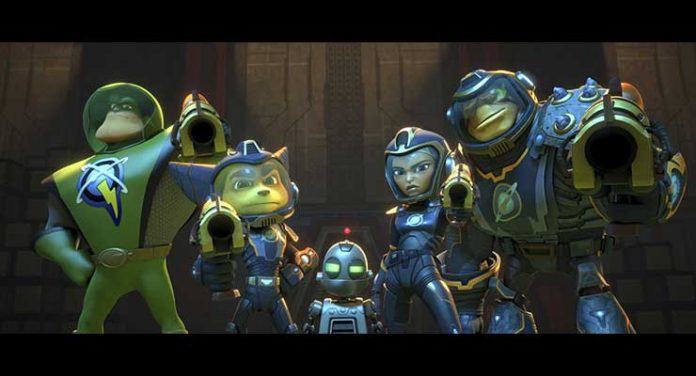 Successful video game franchise Ratchet & Clank gets its feature film début in this eponymously titled star-studded CGI animated adventure. Serving as sort of origin story of how the “lombax” Ratchet (James Arnold Taylor) teamed up with his braniac robot partner Clank (David Kaye), the chaotic film takes the pair on a dangerous adventure to save the universe.

Ratchet dreams of becoming a member of the superhero team Galactic Rangers and he gets his chance when the team, led by the charming yet egotistical Captain Qwark (Jim Ward), is forced to take on a new team member in the face of a new threat. Planets are suddenly being destroyed and they need to stop it in a hurry. With the help of his new friend, the genius robot Clank who crash-landed near him, Ratchet is able to win a spot on the Rangers, and Clank soon discovers that the evil Chairman Drek (Paul Giamatti) has a super weapon that can destroy planets instantly and he has teamed up with the super villain Dr. Nefarious (Armin Shimerman) to destroy worlds. Making matters worse, Chairman Drek has lured Captain Qwark over to their side using Qwark’s ego against him. Qwark has been feeling upset about all the attention the new Ranger, Ratchet, has gotten from the public. Now, it is up to Ratchet & Clank to save the universe from the two maniacal super villains and to save Captain Qwark in the process.

Hold onto your hats while watching Ratchet & Clank, because this film just doesn’t let up. There is a dizzying amount of action and very forced humor in this movie that doesn’t always work, at least it won’t for the adults present. Kids will probably enjoy the hyperactive, kinetic energy that directors Kevin Munroe and Jericca Cleland bring to this story, but it is ultimately one giant sugar rush that lacks the artistic depth of the very best films from studios like Pixar. There are hardly any real turning points or moments of reflection, the deepest or lowest point perhaps comes when Captain Qwark questions his turn to evil, but that is quickly smoothed over and he is back to being the pompous hero again, as if we ever had any doubt he would be.

There’s an excellent cast of voice actors in Ratchet & Clank that includes Paul Giamtti, Sylvester Stallone as a Transformers-looking robot and Rosario Dawson, but the material and lack of characters we care about negates their presence and abilities. In the end, the kids may like this, but they will quickly grow tired of it. Parents will probably recoil every time they see their kids reaching to put the disc in the player. 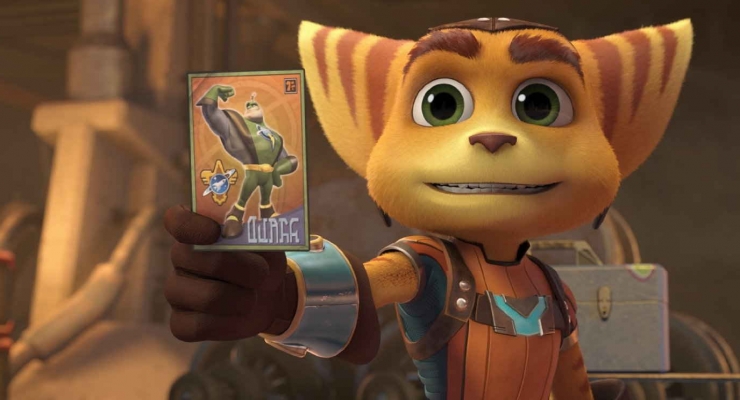 The CG animation for Ratchet & Clank gets an AVC 1080p transfer to Blu-ray that is free from noise, aliasing and compression errors. The detail is excellent, as is contrast and color reproduction. Ratchet’s fur looks very real and each strand can be made out.

Ratchet & Clank gets what can only be described as an awesome English DTS-HD Master Audio 5.1 sound mix on Blu-ray from Universal. While I would have loved to hear this mix in DTS:X (or Atmos for that matter) it sounded superb on my system regardless. Given how chaotic the movie itself is, the mix is about as aggressive as one would expect it to be, but the balance is flawless with a tight circle of sounds, full and clean dialogue, solid discrete effects that move around you, and deep lows. The high-end is open and airy without being fatiguing on the ears.

There isn’t much on offer on this release. One sort-of making of and a featurette on the film and the video game origins. Both are brief and rather non-informative.

The filmmakers fell into the usual trap of trying to replicate the action of a video game on the big screen without giving us an actual story and characters to care about. While Ratchet & Clank looks great and sounds great, when it ends it’s forgettable. It’s not a movie I see kids or adults growing attached to. The Blu-ray, however, is an astounding Home Theater reference piece. The movie is out now on Blu-ray Combo Pack from Universal and is also available on DVD.