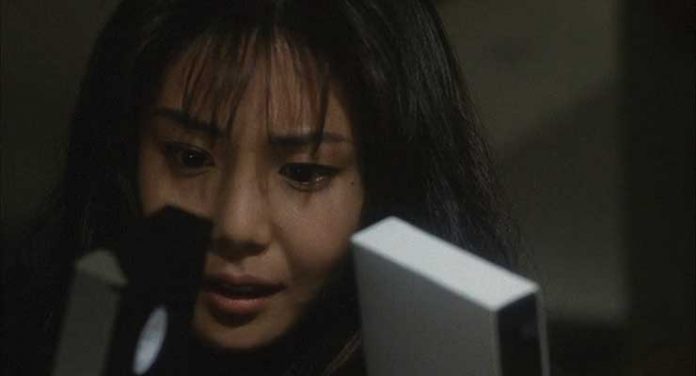 The star of Ring Collection or Ringu Collection (as the films are somewhat incorrectly titled in the North American Market) is the 1998 original from director Nakata Hideo (Dark Water), which spurred on the late nineties boom in J-horror internationally and would eventually be remade in Hollywood as The Ring, directed by Gore Verbinski, starring Naomi Watts.

Nakata’s Ring or Ringu is more of slowly paced procedural similar in tone to the previous year’s Cure. Unlike the Hollywood horror of the era, it relies far less on gore and jump scares, and more on an overriding sense of dread, atmosphere, and of course, the typical yūrei or Japanese ghost, dressed in white, usually female, with clammy, grey skin and long tangled black hair. The yūrei in Ringu is one Sadako, a tortured spirit who was once a clairvoyant woman who was killed for her ability and now she haunts people almost like an infection through a strange videotape.  When a group of teenagers turn up dead, their faces strangely contorted and the cause difficult to determine, Reiko (Matsushima Nanako, When Marnie Was There) the aunt of one of the victims and a journalist who is also a single mother begins to investigate. That’s when she uncovers the urban legend going around amongst the teens about a videotape that, once you watch it, causes you to receive a creepy phone call that portends your death within seven days – unless you can find someone else to watch it, thereby spreading the curse like an infection and saving yourself in the process.

Ringu hit at the right moment in time, bringing a new kind of horror to the world, a kind of horror that focused on the contemporary anxieties of the burgeoning technological world, the still somewhat new world wide web, which coincidentally helped to spread the film’s popularity virally amongst its fans paralleling the film itself, and fear that terror can strike anyone, anywhere, at any time.

Nakata would go on to make a sequel, Ring 2 (Ringu 2), which was not quite as successful commercially or artistically, and there was also George Iida’s “lost” sequel, Spiral, both of which are included in this collection. They both take slightly different tracks in continuing the Sadako story, even as they bring back some of the key characters and following the same basic plan of atmospherics and pacing. Finally, included in this collection is the Sadako “prequel” Ring 0 (Ringu 0) from director Tsuruta Norio. The production is not as good at the original in this prequel, but it offers a backstory to how Sadako becomes the vengeful murdering spirit of the first two ‘official’ films, although it seems like the mythology may have been changed somewhere along the line, unless I missed something somewhere. In any case, this final film is somewhat burdensome to make one’s way through and feels like it is at the end of the line for the better days of J-horror, even though it predates the Western phase of the J-horror remakes.

Each film comes in a 1.85:1 AVC 1080p encodement. Ring (1998) is a brand new 4K restoration from the original camera negative approved by director of photography Hayashi Junichiro, and it certainly proves to be the best looking of the four films included in the collection. It looks so beautiful with a natural layer of grain, superb detail and nuanced shadows, no noise and natural colors. The “sequels” on disc two, Ring 2 and Spiral, both look good as well, though not quite as crisp as Ring. Of the two, Ring 2 looks the best with a good amount of texture and a thin and consistent layer of grain. Spiral shows some noise in the darker areas and a bit of source damage and film sparkle but is still satisfying overall. Finally, on disc three, Ring 0 provides the softest looking picture with the coarsest grain structure and blandest overall colors, much like the film itself.

All four Ringu films are provided with Japanese DTS-HD Master Audio 5.1 audio mixes that are fairly atmospheric but offer a limited amount of dynamics given the films are mostly dialogue driven. There are also LPCM 2.0 stereo mixes of the Japanese audio that provide very clear audio and wide stereo panning that are almost as good as the 5.1 mixes.

Arrow really packs this collection with excellent bonus features, including informative and interesting to listen to audio commentaries and an A+ video essay on J-horror.

Anyone into J-horror and the film arguably singlehandedly responsible for kicking off the international boom in the 1990s for the genre will definitely love this wonderful collection from Arrow Video. Of most interest, of course, is the new 4K restoration of the original 1998 film – everything else is icing on the cake.

Ringu Collection is available on Blu-ray October 29, 2019 from Arrow Video