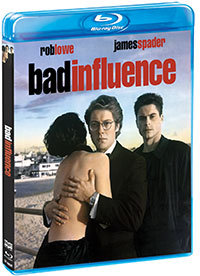 This 1990 thriller directed by Curtis Hanson (L.A. Confidential, 8 Mile) and penned by David Koepp (Jack Ryan: Shadow Recruit, Premium Rush) gained most of its notoriety because it was released around the time of co-star Rob Lowe’s sex tape scandal involving an underage girl. Nevertheless, the slick production and Hitchcockian influences that belie its low budget are worth some guilty Saturday afternoon popcorn viewing.

lush life with a cushy home, a beautiful fiancée and a great car, the one thing he lacks is self-confidence and the respect of his colleague at work who is trying to undermine him and steal his promotion. Michael meets the quick-talking Alex (Lowe) who saves him from a right butt kicking in a bar and Alex immediately begins to exert an inordinate influence over his life, mostly aided by drugs, alcohol, and beautiful women. Michael’s confidence starts to boom, but the fast-friendship slowly turns sour as Michael is led into a life of petty thievery, and Alex begins to show his darker side.

While Bad Influence’s visual style is still good sight and Curtis Hanson manages to eek out something palatable that hints at the neo-noir of L.A. Confidential, in the end the good meets evil theme of the film begins to wear thin and actually turn rather cornball by midway through. Spader carries the film with his good guy on a bender performance, but Rob Lowe is just awful straight through, never believable, and just plain campy, comparable to the likes of Elizabeth Berkley in Showgirls kind of campy. If it weren’t for the Hitchcockian allusions and the slick, turn of the decade style and out of left field twists that keep the viewer interested, there wouldn’t be much left to recommend with Bad Influence.

Shout! Factory offers up this relatively low-budget 1990 thriller in a satisfying AVC 1080p encodement of its 1.85:1 framing on Blu-ray. The early title sequences were cause for concern as they showed a lot more film softness and source damage, relatively speaking, but once past that, things settled down and the imagery looked very clean, crisp, and with a nice, thin layer of natural grain. Overall contrast was good and colors were vibrant without being overly saturated.

experience. The stereo imaging is good, though it could be just a bit wider, the dialogue is clean and the balance of sounds is just right.

Writer Davis Koepp sits down for an informative half-hour long interview that details quite a bit of his early career and his involvement in Bad Influence.

A forgettable yet at times entertaining bit of guilty popcorn pleasure, Bad Influence still cannot escape the scandal that made it famous to begin with, but this Shout! Factory Blu-ray is a strong release for anyone who wants to see what all the fuss was about, deservedly or not.