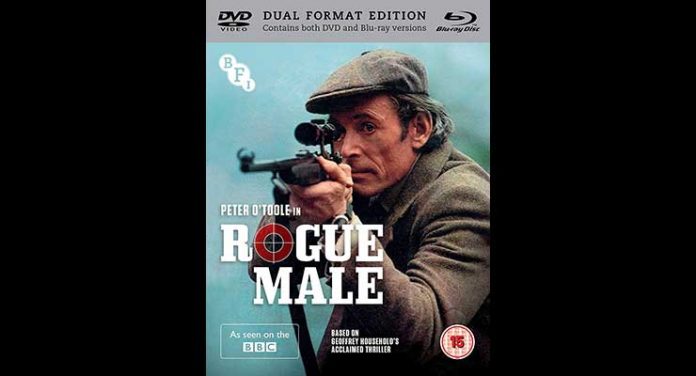 Rogue Male is a 1976 British made-for-TV movie from director Clive Donner based on the novel by Geoffrey Household. The film, set in early 1939, stars Peter O’Toole as Sir Robert Hunter, who travels to Germany and tries to assassinate Adolf Hitler with a high-powered rifle as the dictator is entertaining at his getaway the Berghof with his lover Eva Braun. Hunter’s shot misses its mark, and the English nobleman is detained by the Gestapo, tortured, and left for dead. He manages to escape and make his way back to England, but he finds himself on the run not only from the Germans, but from his own countryman, and ends up having to escape to the English countryside, using his own sporting skills to elude those pursuing him.

Rogue Male is a tense and taut thriller that at times betrays its limited television format, thanks to the concentrated effort of director Donner and brilliant performance from Peter O’Toole. While the film does skip a little too quickly along its plot line and not quite explain too much why Hunter begins his journey in the first place, what his background is, and why his own government would abandon a person of such high station at this particular junction just for trying to kill Hitler, there are many moments to enjoy. There’s a fine foot chase through the Underground, for instance, and a somewhat crafty pursuit with Hunter in a tandem bicycle in the countryside.

Visually, Rogue Male plays it safe, but this is a straight ‘70s TV movie like The Bourne Identity miniseries from a little over a decade later, it is tied to its era from a production standpoint, but still holds up well decades later.

Rogue Male was shot on 35mm Eastman 5247 film stock and comes to Blu-ray from the BFI in a 1.33:1 AVC 1080p encodement. The image is very grainy, but very natural and full of detail and natural color. Some of the darker scenes do tend to collapse into and amorphous blob of crush and noise, but this has more to do with the production than the transfer. This release looks great for a TV movie from 1976.

The original English monaural mix is included in LPCM 2.0. It sounds clean, full, and free from clipping or excessive noise and hiss.

BFI offers up their usual slate of strong special features exploring the film, including interviews with the director and archival features related to the film’s content

Rogue Male is an unusually well-played TV thriller that, despite some faults, is well-cast and gets to the point. Sure, some further exposition would be appreciated, especially given the feature-length run time, but the pacing and acting keep viewers entertained. BFI’s transfer is organic and well done given the vintage.

3.6 / 5 TheaterByte Rating
{{ reviewsOverall }} / 5 User Rating (0 votes)
UK:15Rating Certificate
BBC | BFIStudios & Distributors
Clive DonnerDirector
Frederic Raphael | Geoffrey Household (novel)Writer
103 Mins.Run Time
£19.99MSRP
28 Jan. 2019Release Date
1.33:1Aspect Ratio
AVC 1080pVideo
English LPCM 2.0 MonoAudio
English HOHSubtitles
The Creative Content
The Video
The Audio
The Supplements
Summary
In early 1939, English nobleman Robert Hunter (Peter O'Toole) tries to assassinate Adolf Hitler with a high-powered rifle as the German dictator entertains friends in the Berghof with his lover Eva Braun. His shot misses, and he's taken prisoner, tortured, and left for dead by the SS. Eventually Hunter escapes back to his home country, but ends up on the run with this sportsman's skills coming in handy in the English countryside. Based on the novel by Geoffrey Household and directed by Clive Donner, this 1976 made-for-TV thriller ages well and is aided by taut direction and slick performance by Peter O'Toole. BFI presents the vintage movie in a rich 1080p transfer.
What people say... Login to rate
Order by: