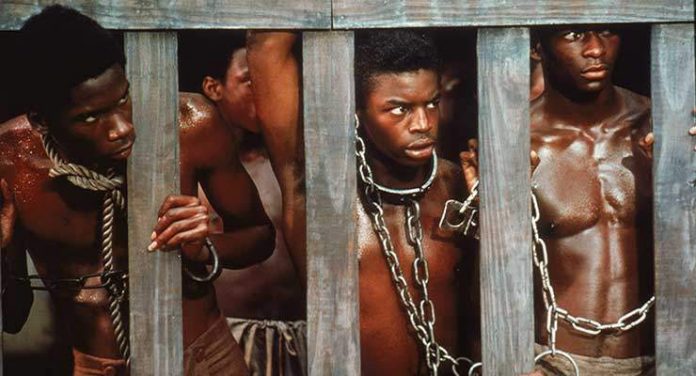 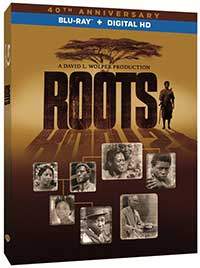 The historic 1977 miniseries event ROOTS, based on Alex Haley’s best-selling novel Roots: The Saga of an American Family, was a game changing cultural event in the United States. It changed the way American’s perceived race, its history of racism and slavery, and Black history and genealogy, despite the questions to the historical accuracy of Haley’s work, meant as an accurate tracing of his lineage and oral family history back to one ancestor and one village, that would be brought to light from charges of and subsequent settlements of plagiarism suits and further studies by historians. All of that aside, there is no

doubt that ROOTS, was an enthralling series that tore the scab off and started a much-needed discussion of the country’s troubled past. Haley’s story tracked the generations of one family, descended from the African Kunta Kinte (LeVar Burton), a Mandinka warrior from The Gambia region who is taken by slave trappers one day while out looking for wood to make a drum. From there is take to Annapolis, Maryland on the Lord Ligonier where he is sold into slavery, given the name Toby, and eventually has a daughter who he names Kizzy (Leslie Uggams), who goes on to have a son, George (Ben Vereen) by a slave master who raped her. George, or, “Chicken” George, grows up to become a renowned trainer of chickens for cockfights and eventually the first in Kinte lineage to earn his freedom.

The story stretches from 1750 all the way to the end of the American Civil War when all the slaves eventually earn their freedom, but face new challenges like the rise of the KKK and the challenge of earning a living in the defeated South when they still have no real rights. ROOTS had frank language and visual depictions of the cruelty of the institutions of slavery, and to this day is a major part of American popular culture in literature and song, including Kendrick Lemar’s “King Kunta” as a recent example. The miniseries included a cast of virtual who’s who of Black actors of the time, including John Amos, Louis Gossett Jr., LeVar Burton, and Ben Vereen, and also struck on the brilliant idea of casting many top White actors against type as slave owners and overseers, such and Lorne Greene, Edward Asner, Sandy Duncan, and George Hamilton.

At the time of its original airing, ABC network “dumped” all 8 episodes over 8 nights, an unusual way to air a mini-series at the time, which were usually aired over multiple weeks. The network was afraid that the subject matter and nearly all-Black cast would lead to low ratings. In fact, ROOTS went on to become one of the highest rated miniseries of all time, with its final episode currently ranking as the third highest rated. The History Channel is currently running an updated, 8-hour version of the series from remade from a modern perspective.

ROOTS was shot on 35mm film and framed at 1.33:1, which was the standard for television in 1977. This 40th Anniversary Blu-ray release from Warner Bros. preserves that framing and brings the miniseries to disc in an AVC 1080p encodement. The image has been cleaned up nicely and obviously maintained very well over the years. The grain is consistent, natural, and not too obtrusive. Colors look good and contrast is strong, but there are some issues with crush, not so bad that a lot of detail is lost in the shadows, but it is definitely noticeable from time to time.

The monaural soundtrack is provided in DTS-HD Master Audio 2.0. It is clean and the dialogue is intelligible.

Music sounds clear and balanced in the mix, but overall it’s a little boxy, but not bad for a television mix from 1977.

The extras included on Disc 3 of this set are all worth watching. They offer historical perspectives and analysis from the cast and others on the series and the subject.

One of the most powerful miniseries ever made, ROOTS remains a gripping and monumental television event that everyone should watch. Warner Bros. have brought it to Blu-ray in a solid HD transfer.