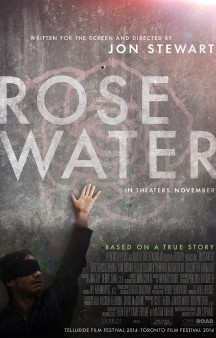 Iranian-born London journalist Maziar Bahari appeared in a skit on Jon Stewart’s The Daily Show discussing spies. It was a skit that, a week later, would end in Bahari’s arrest by the Iranian authorities. His story is told in the new film Rosewater.

Bahari (played by Gael Garcia Bernal), was in Iran covering the 2009 election when he was interviewed by The Daily Show‘s Jason Jones (who was dressed up as a spy). The interview, which took place in Tehran, was in The Daily Show‘s comedic style of acerbic wit. In it Jones and Bahari discussed spies in Iran, and unfortunately the interview was seen by the Iranian authorities. Bahari was later arrested and imprisoned for 118 days, between June and October 2009. 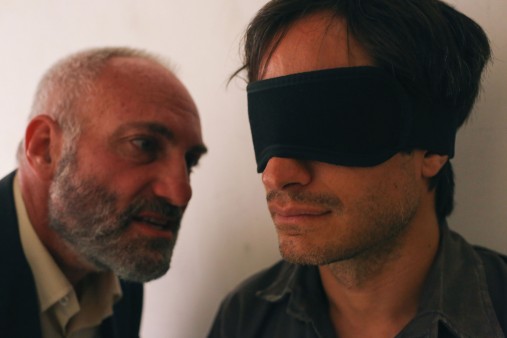 Stewart, who has never written or directed a motion picture before (he wrote and directed Rosewater), has hosted The Daily Show since 1999. Stewart has written books, produced other television shows, and has hosted the Grammy and Academy Awards. But what made him want to venture into uncharted territory to write and direct his first motion picture? Perhaps he was feeling very guilty about Bahari’s arrest and imprisonment. Whatever the reason, Rosewater is a very good debut into the film world for Stewart. 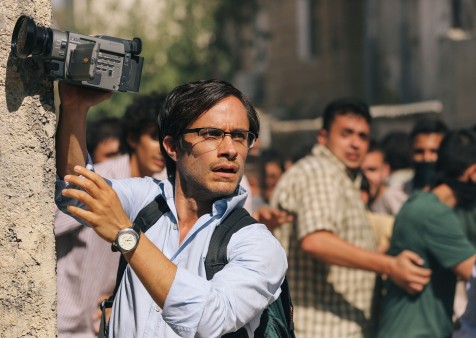 In the beginning of Rosewater, we see Bahari in his London home being very affectionate to his pregnant wife Paola (Claire Foy). As a journalist, he’s about to go to Tehran to cover Iran’s 2009 election. He’s sent there by Newsweek, and since he is part Iranian, it’s a natural choice for him to go. On a fluke, he’s interviewed by The Daily Show, which leads to the drastic consequences. A week later, at his family’s home, he is arrested and sent to a Tehran prison where he is interrogated non-stop by a man who doesn’t give his name, but the movie calls him Rosewater (played by Kim Bodnia) because, according to the real Bahari, he smelled of Rosewater. Bahari is interrogated daily, Rosewater wants to know names of spies as he (and the government) is convinced that Bahari is not who he says he is – a journalist. So the film Rosewater focuses mostly on Bahari’s imprisonment, where he’s blindfolded, tortured, threatened with execution, and ordered to confess to being a spy on television. It’s disturbing to see Bahari getting beaten up – it’s almost a sure thing that he will never make it out of the Iranian prison system. But after 118 days, he is released, and he heads back to London to be with his wife and new baby. It’s, however, an anti-climactic ending as we are robbed of any emotional released-from-prison scenes – it’s just Bahari out of prison and on a plane back to London.

Garcia Bernal is a perfect choice to portray Bahari. Even though he is Mexican, he looks a bit Iranian – so the story is totally believable. It’s a role that most actors would’ve loved to play, but Garcia runs with it. But it’s not Garcia’s movie, it’s Stewart’s movie. He took twelve weeks off from The Daily Show to shoot the film, and it’s an impressive debut. Rosewater is dramatic, taut, well written and directed. And though the ending is a bit of a letdown (perhaps this is how Bahari wanted his release to be portrayed – quietly – as he still has family members who live in Tehran). But that’s a minor quibble for a film that tells a real life nightmare of a story of what one journalist went through when he was just doing his job.