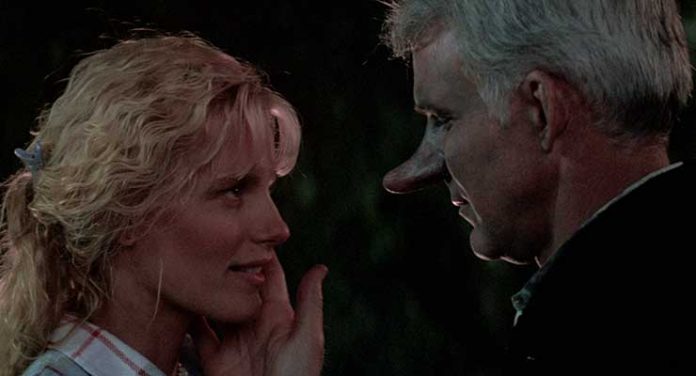 In 1987 Steve Martin starred in this contemporary update of Edmond Rostand’s classic drama about love and inner beauty overcoming the shortcomings of outward appearances, Cyrano de Bergerac, which Martin also wrote the screenplay for. In Martin’s film, he cast’s himself as C.D. Bales, a small town volunteer firefighter who falls for out-of-towner Roxanne (the charming and gorgeous Daryl Hannah) who comes to the out-of-the-way town because it is the perfect place for the beautiful astronomy student to study the skies and pinpoint a comet she believes she has discovered.

C.D., though well liked in the community and quite witty, has one obvious flaw, his prodigiously sized nose, which he doesn’t take kindly to people pointing out or making fun of. His insecurities about his nose have also kept him from pursuing romantic entanglements. When C.D. begins to have feelings for Roxanne, he can’t bring himself to tell her because he doesn’t believe she could ever be attracted to someone with a nose like his. Unfortunately for C.D. he may be right, because Roxanne falls for the hunky new fireman in town, Chris (Rick Rossovich), but Chris has a flaw of his own – he can’t talk to women without getting terribly nervous to the point of vomiting. He is also a complete airhead, someone that Roxanne really wouldn’t fall for. When Chris asks C.D. for help talking to Roxanne, C.D. can’t help but use it as an opportunity to pour out his soul to Roxanne under the guise of love letters from Chris. It works and Roxanne falls madly in love with Chris, not knowing that the feelings that were stirred up in her were really for C.D.

Roxanne is a charming film that, despite the occasional moment where Steve Martin just can’t help but take some of his jokes a bit too far, to the point where they aren’t really funny anymore, it’s full of authentically funny and heartfelt moments. Director Fred Schepisi is great at staying out of the way and letting the actors do their thing, like when Martin, accosted by a drunkard in a bar who calls him “big nose” comes back by running through twenty improvised jokes about how big his nose in, just to show how dumb the guy really is. The chemistry between Hannah and Martin is actually quaint even factoring in the obviously fake prosthetic nose that offers a few opportunities for gags to disrupt the otherwise solid rom-com.

Roxanne may not reach the heights of other ‘80s romantic comedies like When Harry Met Sally or Say Anything, but it is one of Steve Martin’s most controlled and charming performances of the era and the film does offer a heartfelt argument for the power of inner beauty. 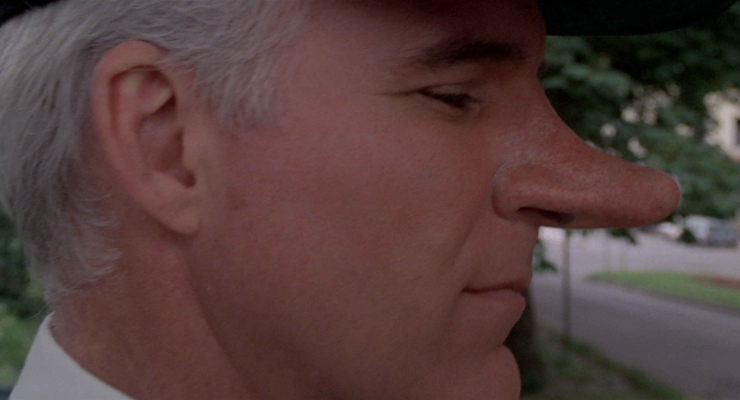 This “new high definition presentation” on Blu-ray from Eureka Entertainment of the 1987 film Roxanne is presented in the original 2.35:1 aspect ratio and encoded in AVC 1080p. While it looks organic and relatively clean given its age, there is certainly a bit of coarseness to the grain structure and some film softness there. The contrast is decent, though at times there is a little overall dullness and just hint of things tipping toward noise in the darker scenes. Colors do look relatively vibrant and lifelike in the brighter outdoor scenes, however, and Roxanne looks generally pleasing, especially given both the constraints of the genre and the age of the film.

There is a lossless DTS-HD Master Audio 5.1 mix that sounds nicely spruced up with clean dialogue and a bit of atmospherics in the surround channels as well as a LPCM 2.0 stereo mix. Both are good given the film’s nearly thirty-year-old vintage and have surprisingly wide stereo imaging and good dynamic range. The stereo mix sounds a little more natural and authentic to the era.

We only get the original theatrical trailer (HD) is an on-disc bonus with this barebones release. The standard DVD of the feature film is also included in this Dual Format Edition from Eureka.

A funny and charming ‘80s rom-com starring Steve Martin and the lovely Daryl Hannah, Roxanne looks satisfyingly organic in this high-definition transfer on Blu-ray from Eureka Entertainment in spite of being a barebones release.