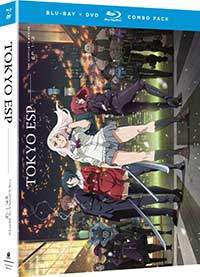 Tokyo ESP is a supernatural sci-fi series based on the manga series by Segawa Hajime. The central character is the female high school student Urushiba Rinka whose normal life is turned upside down when after seeing the unusual sight of a flying penguin and some glowing gold-fish, one of these glowing fish enters Rinka’s body. When she awakes the next morning, Rinka falls through the floor of the tiny apartment she shares with her father – it was no dream. The glowing fish gave her superhuman powers. Powers of extrasensory perception, to be exact, and one boy who was there to witness it, Azuma Kyōtarō, confirms that it is all true. He has power too—the power to teleport places. Soon Rinka and Kyōtarō find themselves at the center at a battle in Tokyo when evil “espers,” as they are now being called, decide to use their powers not for good, but to bring normal humans, and the Japanese government in particular, to their knees. Humans know Rinka as “the white girl” because when she engages her power to pass through solid objects, she begins to glow and her hair turns completely white. But her and Kyōtarō’s powers may not be enough.

The series is most profound in a way because it tracks the efforts of an ordinary girl who, like most “superheroes” is thrust into a world where she suddenly has great power, and, as the cliché goes, she learns that with great power also comes great responsibility. However, Rinka doesn’t automatically become the unbeatable heroine, although she does stay true to her ideals. She has a very rough go of it defeating her enemies and a long stretch where she must learn to do it without the help of her ESP. Of course, this is also a weakness of the series because it tends to invoke many of the well-worn tropes of the superhero genre in order to get its story told. Yes, we all 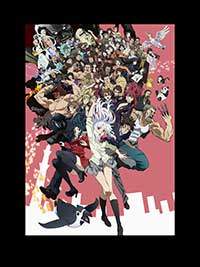 know about the young hero (or, heroine, in this case) having to mature, possibly learn to stare down danger even without her powers in order to be tested and learn if she is a true heroine or not. Then there are the sidekicks with the oddball talents. In this case Rinka has a pair of younger kids who become her friends. One who can see a few minutes into the future and one with the power of psychometry, the ability to see the entire past of any object she touches.

Apart from these cliché elements, the writing is strong, and the visuals are even stronger, starting off right from the opening sequences of the first episode, which really begin where the series ends in a classic sort of Tarantino-like non-linear turn of events. But the imagery is filled with detail and a very sleek and modern aesthetic, and such three-dimensional depth that characters and background nearly leap off of the screen. This is a great looking series in every way, from the character designs to the glimmering Tokyo skyscrapers that populate the backgrounds at night.

The opening animation sequences of Tokyo ESP in the snowy nighttime streets not only set the tone for the sleek, eye-catching stylized anime style of the series, but also the high quality of the AVC 1080p encodement of the digital animation on Blu-ray. Apart from the very slightest hints of color banding that are visible on occasion, this release looks very good with lots of crisp, three-dimensional detail, excellent contrast, black levels and white balance, and no motion artifacts.

Tokyo ESP comes with the original Japanese 2.0 mix in Dolby TrueHD and the English dub in Dolby TrueHD 5.1. While I most definitely prefer the Japanese voice cast by a wide margin on this series, it must be said that the 5.1 mix is really a strong one. It has excellent balance, makes good use of the surround channels for some solid effects and atmospherics and offers up some deep low-end. The 2.0 mix is no slouch either, however. I am increasingly impressed with the sound on FUNimation’s recent releases, which is not something I said often in the past.

Apart from the very welcome audio commentaries for episodes 2 and 5, FUNimation just fills this set up with the usual promo material.

An excellently drawn and written sci-fi series, Tokyo ESP has a strong young female lead, beautiful artwork, and fantastic action sequences. I am eager to see a second season of this one.