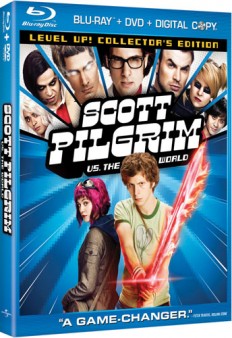 Purchase Scott Pilgrim Vs. the World on Blu-ray at CD Universe

There are comic books, and “graphic novels,” thank you very much, and then there’s manga: thick volumes of often black-and-white stories with a distinctly exaggerated Asian style, and enough little tonal differences to ensure that we won’t mistake these adventures for those of Batman or Spider-Man. Such was the format chosen by writer/artist Bryan Lee O’Malley for his Scott Pilgrim series, a slice-of-life of a 22-year-old-slacker who meets and immediately falls for his dream girl, Ramona Flowers. It-boy Michael Cera and the lovely, talented Mary Elizabeth Winstead bring this couple to life in the big-screen Scott Pilgrim vs. the World, a fresh, funny, and downright surreal action comedy.

Ramona has entered Scott’s life by way of a string of failed relationships, the last one so screwed up that the jilted lover has assembled The League of Evil Exes, whom Scott must defeat before he can find true love. To make matters worse, each of the septet has a super power, putting regular-guy Scott at a disadvantage, and so to survive he must break out all the sweet moves he has learned from years of playing videogames. The videogame theme permeates the entire movie in fact, and while its hip, dry-witted vibe might not click with everyone, I found it to be a real hoot, and the frequent action scenes are pretty rockin’, too.

As we would expect from a recent, high-tech, well-budgeted summer film, Scott Pilgrim is a thrilling vision, its candy colors enhanced with a variety of stylistic flourishes. Shot on a combination of film and digital video, the movie’s details are exceptionally sharp, with very modest compression artifacting in shadows and backgrounds and other out-of-focus areas of the 1.85:1 frame. Blacks could be a little deeper and more natural, and there’s a touch of grain and noise, but overall the video quality here is about as amped up as we could hope for.

When not going toe-to-toe with the über-exes, Scott and his friends are competing in a battle of the bands, and so anything to do with music–even the distortion in a club’s P.A. system–is remarkably well-captured and presented in all its subtlety. Of course, there’s lots of kung fu fighting as well, with bigger-than-life weapons and the requisite destruction of private property, so the DTS-HD Master Audio 5.1 mix is graced with plenty of bass and loud, discrete use of the rears. There’s a fullness across the entire soundstage too, with impressive dynamic range.

This is quite frankly one of the most heavily-featured new-release movies I’ve seen on Blu-ray this year, with all of the usual extras and plenty of surprises. For starters, we’re given four separate audio commentaries, rounding up almost everyone we’d possibly want to hear from. There are a total of 21 deleted and alternate scenes with optional director commentary, plus still more Alternative Edits and “Bits and Pieces.” An in-depth “making of” program has been assembled for Scott Pilgrim, but we can also delve into any number of shorter, more focused explorations of all aspects of pre-production, production, post-production and beyond.

The disc is also BD-Live-enabled, with Universal’s pocket BLU bonus content and control via select portable devices. Disc Two is a standard-definition DVD of the movie, and an insert is included with a unique code unlocking a Digital Copy download for iTunes or Windows Media. And furthering another recent Universal trend, the studio is throwing in a free streaming rental of another movie that we might enjoy, either Pitch Black or Tremors, accessible via BD-Live, or on a computer or supported smartphone.

The complete rundown of extras is as follows:

Scott Pilgrim vs. the World is deliciously weird, audacious and amusingly in-your-face, and so thankfully the bold sound/video are up to the challenge and appropriately over-the-top. And if we like what we see, the supplements should keep us occupied for an entire weekend.