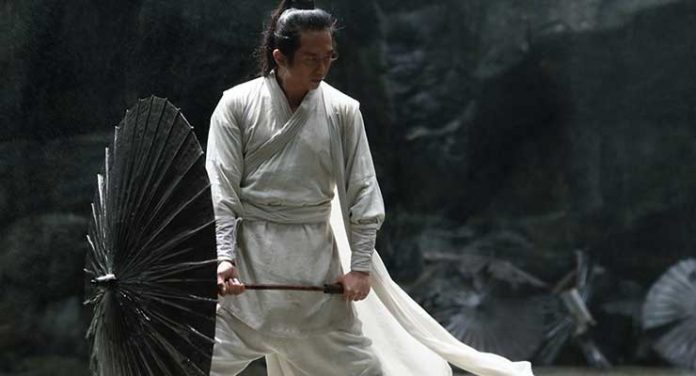 Zhang Yimou (House of Flying Daggers, Hero, Raise the Red Lantern) brings his greatest film in years to fruition with Shadow, a visually striking wuxia film with a complex layer of intrigue.

In an ancient Chinese royal court, the young and unpredictable king Pei Liang (Ryan Zheng) refuses to go to war with the rival kingdom that has stolen one of his cities. The brilliant and revered military commander has installed a secret weapon to bring down the king and spur on the war to take back the stolen territory – a “shadow” commander to take his place (Chao Deng in both roles), as he has been hiding away with his health slowly deteriorating for years from a previous encounter with the rival kingdom. He helps train his “shadow” and the army in a new combat style using bladed umbrellas, accounting for some of the film’s most visually engaging fight sequences. The complexities of the royal intrigue sort of break down just a little bit in the screenplay, leading to a somewhat camp denouement after a wonderfully sustained, and intense build up toward the finale, but this can be overlooked by Zhang’s deft handling of the numerous elements of the film in its entirety and purposely vague, thought-provoking ending.

Zhang’s previous films have usually been bursting with color, but in Shadow, he goes in the opposite direction, playing on the theme of yin and yang, dressing his visuals in stark blacks and whites and high contrasts for a bi-chromatic visual treat. The film is drenched in shadows and soft light, the characters are in beautiful, flowing costumes, and the atmosphere is almost Gothic, to put it in Western terms.

As always with Zhang’s wuxia films, the orchestration of the martial arts is like a ballet as well. The “feminine moves” of the umbrella style when coordinated en masse is invigorating. When all this is melded with the subtlety and often bleak sounds of the zither score, Shadow proves an enticing and unforgettable film that is sure to become another Zhang Yimou classic. 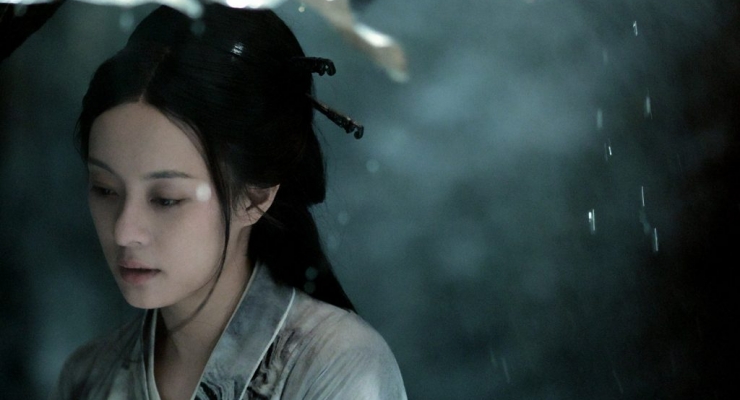 Shadow was shot on the Phantom Flex4K with Zeiss Master Prime and Angenieux Optimo lenses and the Red Weapon Helium 8K with Zeiss Master Prime and Arri Macro and Angenieux Optimo lenses and a 4K digital intermediate was used in mastering where the film was mastered with Dolby Vision HDR. There is a 4K Ultra HD Blu-ray release, but, alas, we were only sent the Blu-ray from the PR firm to review. It’s disappointing in that I was definitely looking forward to reviewing Well GO’s first 4K home video release, especially for a film like this, but from the perspective of the quality of what is presented on Blu-ray, there’s nothing disappointing here at all. This film looks gorgeous. It’s obvious this will look great on 4K with Dolby Vision or HDR10 – it’s a film with a limited color palette of stark blacks and whites, but it looks vivid, crisp, clean, and dynamic. There are inky blacks, but excellent shadow details. Flesh tones are spot on, the whites are brilliant without clipping.

To match the visual beauty of Shadow the film is accompanied with a beautifully done Mandarin Dolby Atmos audio mix. It’s not a mix that is constantly bombarding you with sounds from all over, but the usage is perfect. The zither score is mixed into the overheads and sounds natural, dynamic, and atmospheric. Dialogue is clean and full, and the fight sequences bring more use of all the channels for excellent immersion. There are also lots of quiet moments handled wonderfully.

There’s a ‘making of’ and two official trailers, the original and international, included on the disc. A DVD with the feature film is also included.

Shadow is a film one has to experience — a powerful visual epic, a surprising story of intrigue, and a stunning artistic achievement. This Blu-ray presents the film perfectly for those who don’t yet have 4K capabilities.