Apart from having one the longest titles ever for an anime series, Shimoneta: A Boring World Where the Concept of Dirty Jokes Doesn’t Exist may also be one of the funniest series you ever watch, assuming you’re into dirty jokes and general perversions. Based on the Japanese light novel series written by Akagi Hirotaka and illustrated by Shimotsuki Eito, the title itself is a bit ironic given the ecchi nature of the series and frank sexual discussions.

Firstly, yes, it is set in a world where “the concept of dirty jokes doesn’t exist” because Japan has outlawed all lewd and sexually deviant behavior to the point where people aren’t even allowed to say words like penis or vagina and their behavior is strictly monitored by electronic devices worn around their necks. These so-called “Peace Makers” monitor every word and hand motion the wearer makes to make sure they are not saying or doing anything lewd. New high school student Okuma Tanukichi enters the country’s élite “public morals school” to be near his crush, the student council President Anna Nishikinomiya, a girl from one of the most morally élite families in the country of high moral standards that Tanukichi holds in very high esteem. But Tanukichi has a past he cannot escape – his father is imprisoned as a perverted terrorist.

Kajō Ayame, another student from the school who is secretly going by the name Blue Snow, donning panties on her face and wearing nothing but a sheet to defy the moral authorities uses Tanukichi’s past to recruit him in her crusade against the authorities and help her spread lewd material and dirty jokes around the school. The reluctant Tanukichi quickly becomes embroiled in Ayame’s scheme and her “terrorist” organization that she calls “SOX”. Eventually SOX, which finds itself growing to include a number of female members besides Ayame, even Tanukichi’s younger sister, find themselves battling a rival “terrorist” group called “Gathered Fabric” whose leader covers his entire body in wet panties and leads others to steal undergarments all for what SOX considers the wrong reasons. Those “wrong” reasons, as Ayame explains, are strictly prurient, and not for the betterment of the public or helping to open people’s minds.

It also looks really cool. The animation is excellently done. There aren’t any flaws I could find in what are some eye-catching character designs and detailed artwork. The mixture of genres is also well handled, be it your typical slice-of-life style to even some elements of horror. 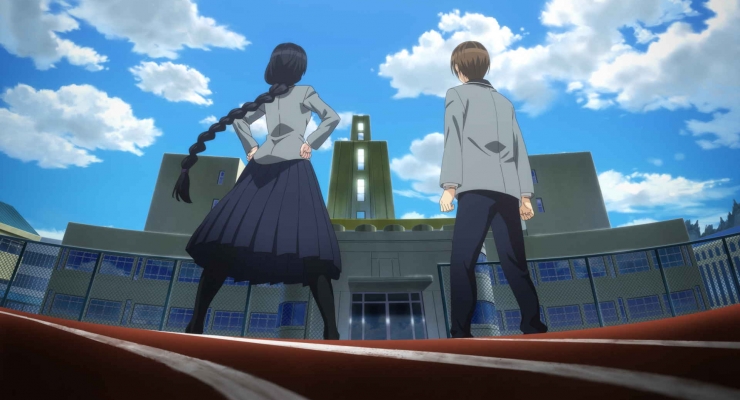 Shimoneta comes to Blu-ray in an AVC 1080p transfer framed at 1.78:1 that looks sublime. This is probably one of the best looking encodements from Funimation I have seen in a very long time or ever, frankly. There is really nothing to complain about with the crispness, color saturation or any sort of banding, noise, or compression errors.

The Japanese stereo mix is provided in Dolby TrueHD 2.0 and the surround mix from Funimation is provided in Dolby TrueHD 5.1. The 5.1 mix is hardly aggressive and a lot more could have been done with it, in my opinion. We get mostly a lot of atmospheric sounds and ambience during cut scenes and action sequences. The dialogue in the Japanese track also sounds bit fuller. The differences in performance between the two casts is awash. There are moments where the Japanese subtitles are a little more lewd than the English dub and vice versa. These dirty jokes can sometimes come down to nuance and comedy is often best heard rather than read, especially this sort. I will mention that I had a weird quirk on this release where, when watching with the Japanese track selected, it kept switching back to the English track while leaving the English subtitles on (even though the subs and audio are locked) whenever the episode changed. I played this on an Oppo UDP-203 with the latest official firmware release.

This Special Edition set comes with two raucous English audio commentaries, a pretty funny 11-minute featurette that shows some older moms’ reactions to watching this rude and crude anime series, and the usual promos, previews, and textless opening and closings on-disc. Theirs is also an exclusive “SOX Recruitment Box” with some neat collectible swag like pins, a tube sock, and sticker. The entire set is housed in a glossy chipboard slipcover.

Shimoneta is very much not for the younger crowd and not for anyone uptight about sex talk. It’s funny, bizarre, and totally outrageous. The Special Edition Blu-ray set looks fantastic and includes some cool collectible swag.