Bleach is the anime series based on the manga by Kubo Tite. It follows the story of the male protagonist Kurosaki Ichigo who gains the powers of a Soul Reaper or Shinagami (think the Grim Reaper) from another Soul Reaper, Kuchiki Rukia. It was a long-running series that ran from 2004-2012.

This Volume 02 Blu-ray collection from Viz Media covers 28 episodes from the series, episodes 28-55, and contains the “rescue arc” dealing mainly with Ichigo and his friends, now separated from each other, as they race through the world of the Shinigami to save the girl who granted him his powers, Rukia, from execution. It will be a harrowing journey, but with the help of the so-called Squad Four’s Hantaro, one of the lowest ranking members of the spirit world, Ichigo must face what seems like an endless challenge of lieutenants and captains in bloody battles to break Rukia out of her cell.

While this arc does at first feel a little like Dragon Ball Z where it’s one battle after another where the hero manages to summon an amazing amount of superhuman strength from thin air at the last moment, it doesn’t take long to realize the more nuanced complexity of Bleach and that is when it begins to draw you in. Each of the characters is on a separate journey of self-discovery and their power is only a part of the equation. The backstories that are artfully woven into the plot help the viewer form an understanding for and attachment with the characters. And just when it becomes all too serious comes a segment of pure comedy to lighten the atmosphere.

Of course, this collection overlaps “seasons” so there is a sense of open-endedness from beginning to end with this second volume and I’m never really sure why distributors do this with anime series. That said, Vol. 02 is riveting and Bleach is good stuff indeed. 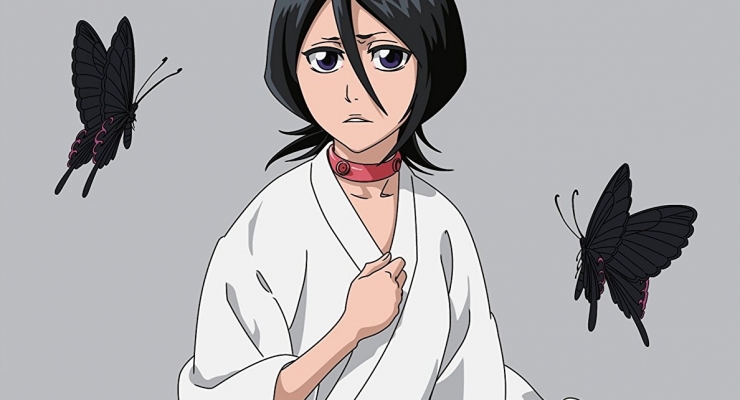 Bleach comes to Blu-ray in a 1.33:1 AVC 1080p encodement from Viz Media. Given its age looks fairly good in this Blu-ray edition, though not as crisp and vibrant as a contemporary HD production or new HD restoration of a cel animation production. It’s just a little soft and washed out looking, but it doesn’t suffer from strong evidence of upscaling like stairstepping around the edges.

The original Japanese-language mix and an English dub are offered in DTS-HD Master Audio 2.0 stereo. Both casts do very good jobs with this material, but there are sometime some subtle changes to meaning in the English dub’s translation that I don’t see justification for, when the dub could have been synced just as easily with the literal translation. In any case, the sound is good for either one, although there are some odd differences there as well. The Japanese track seems to mix people’s spoken inner thoughts dryly and the English track seems to mix the spoken inner thoughts with more reverberation. Take your pick which you think sounds more ‘correct’.

Viz gives this set a good bit of artwork and a 21-minute interview segment with the English cast, which will be of particular interest to fans of the dub.

The second volume of Bleach caries the so-called ‘rescue arc’ of the series and it is edge of the seat intense while still maintaining that balance of comedy and character growth that makes the series so successful. The video and audio quality are about as expected given its age, but certainly more than adequate.