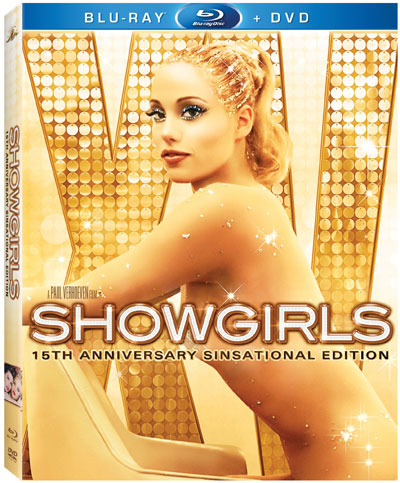 By far, Paul Verhoeven’s most successful attempt at shocking film audiences in the United States was with his 1992 film, Basic Instinct. Beyond that, his European sensibilities become far too watered down for North American audiences to have the same sort of substance behind them and they end up becoming parodies of themselves. Such was the case with 1995’s Showgirls, a film most memorable for receiving a NC-17 rating and being the entry into mature roles for the longtime Saturday morning teen star Elizabeth Berkley.

Berkley had spent years wiling away on the teen comedy Saved by the Bell, and she was ready to let the world know she was a woman and could play more mature roles. So, off came the clothes — the full kit — and onto screens rolled this disastrously campy film, Showgirls. It wasn’t meant to be campy by any means, Verhoeven truly intended the film to be a serious look at the cutthroat underbelly of the Las Vegas stage show scene. Something got seriously lost in translation. Not only did Berkley’s performance not make a serious statement to the world, it was some of the worst acting ever committed to film. In all honesty, it was probably not entirely her fault, because the entire script was horrendous and full of unbelievably bad one-liners. Even Gina Gershon, another star of the film and not such a terrible actress, was terribly doomed in in this hammy role.

Somehow over the years, however, Showgirls has quietly risen in ranks among some crowds as a camp classic. What else could it become? With lines like “I bought it at VERSAYCE” and “I’m erect, why aren’t you erect?,” almost violently over-the-top acting from all parties involved, and completely gratuitous amounts of nudity (did I mention the nudity?) the film was practically destined from the beginning for late night drinking parties. It is unintentionally funny at every turn. A true hidden comedy — and did I mention the nudity?

The story, if you must know, revolves around Nomi (Berkley) who makes her way to Vegas with the dream of being a glamorous showgirl. But before she can do so, she must work her way up from stripper and contend with an older rival (Gerhson) who is none-too-pleased to cede her position as top Vegas diva to the young upstart. It’s all camp, backstabbing, sex, drugs, scantily clad men and women, and lots of ridiculous scenarios, cat fights and the obligatory girl/girl scenes from start to finish as Showgirls evolves. But, let’s face it gents (and ladies), you know you’re not watching this one for the story.

For a film based on such a dazzling city and industry, its 2.35:1 AVC encoding never quite leaps from the screen. The transfer looks to be sourced from the same master as the V.I.P Edition DVD box set. It is relatively clean and grain is certainly preserved, even at times a bit overwhelming. Overall brightness is sometimes a little on the dull side and background detail tends to be soft. Foreground detail is strong straight through, however. Color reproduction is a little inconsistent, sometimes looking natural, and at other times showing perhaps the slightest bit of red push.

Showgirls on Blu-ray offers up a big sounding DTS-HD Master Audio 5.1 soundtrack that really comes alive during all the strip club and Vegas show scenes. The front soundstage is extremely wide with strong directional panning and the overall dynamic range is robust. Some very slight clipping can be heard in the dialogue, but the sound overall is solid. The surround channels are filled with an abundance of ambience that engulf the user and some occasional discrete pans find their way back there as well.

There are no new supplements provided with this release of Showgirls. Instead, all the supplements are ported over from the V.I.P Edition limited edition DVD box set from a few years back, minus the extraneous swag like shot glasses and what not. The supplements continue the salaciousness with pole dancing and lap dance lessons from topless dancers, if you were worried there wasn’t enough skin on this release. My copy also came with a sparkly, Showgirls Diamanté Sticker Tattoo.

Relentlessly cheesy, campy from start to finish and unintentionally comedic, I somehow end up with more versions of this film than I care to admit. As bad as is it, it is not one of the worst films to get through by a long shot, but I’d still recommend this only as a rental if you want a laugh or, one of those “special” nights.

Showgirls: 15th Anniversary Sinsational Edition is out now on Blu-ray from MGM