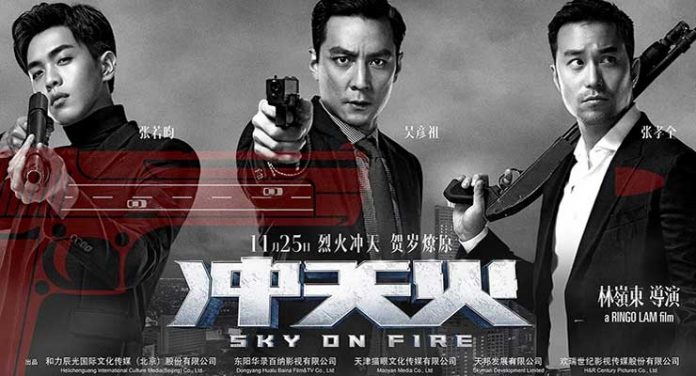 I’m late to the Ringo Lam party only having recently discovered the director after coming across his film Wild City one night on Netflix. I found that film to be entertaining if typical of the Honk Kong action film genre. So now, only a month or two later, I am reviewing his 2016 film Sky on Fire’s Blu-ray release. It’s only the second film from Lam I’ve had the opportunity to see and it’s a disappointment. Lam is apparently a notable director with a lot of films under his belt, many of them with this “on fire” motif — City on Fire, School on Fire, Prison on Fire. Sky on Fire stands out also because its star Daniel Wu is now an international success with his hit American series Into the Badlands and Warcraft: The Beginning and is returning for the first time to Asian cinema with this outing. Unfortunately, this Lam penned and directed outing is not the best reintroduction for Wu.

The film stars Wu as the head security officer in a high-tech pharmaceutical firm that has developed cutting-edge stem cell technology that can potentially cure cancer. When a brother seeks to aid his dying adoptive sister with the stem cell cure, Wu gets tangled in a battle to help the siblings while also keeping the cure from getting into the wrong hands.

At least, that seems to be the crux of the plot, because, honestly, the script that Lam has written hardly makes any sense. There are a lot of bad guys and a lot of people trying to steal these “Ex-stem cells” while also trying to keep this dying woman from getting treatment. Why? I still don’t really know. I don’t even know why Daniels Wu’s character becomes a target of the very company he was employed at.

The convoluted, difficult to make sense of plot is just one of the weaknesses of Sky on Fire. The film is set in some sort of futuristic, high-tech version of Hong Kong is created with cheap looking CGI effects that look out-of-place against the grittier sets where most of the set action pieces take place. The action pieces are strongest part of Sky on Fire and I take it, based on my admittedly limited experience with Lam’s work, the strongest part of his filmmaking toolbox. Like Wild City, the action is riveting an edgy, visceral and balletic, shot just the right way to get your heart rate up – it’s too bad the other parts of the film can’t hold your attention in the same way. 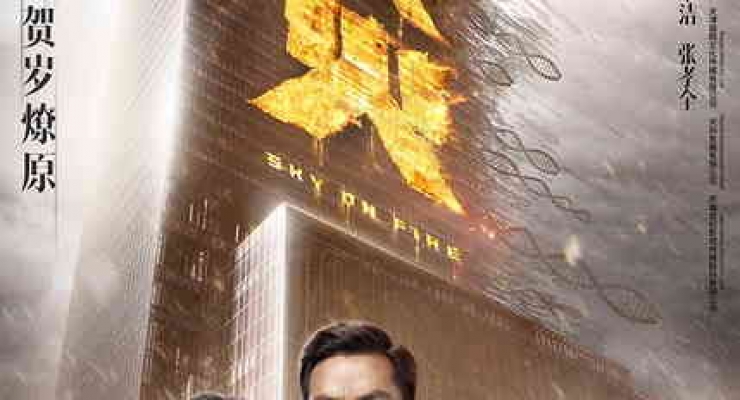 Sky on Fire was shot on the Red Epic with Zeiss Ultra Prime and Angenieux Optimo lenses at 5K and 4K resolution with certain action sequences shot on the GoPro HERO4. A 2K DI was utilized for processing/color coding. The film comes to Blu-ray in a AVC 1080p (24Hz) encodement that is a little bit of a mixed bag. While it mostly looks crisp and cinematic with excellent nuance and contrast, there are a couple of spots with very strong color banding. Those instances are limited, but they stand out enough to bring the overall video score down.

The Mandarin DTS-HD Master Audio 5.1 mix isn’t terrible, but it isn’t great either. The high-end is a little grating during the gunplay, but it is immersive and bullets do fly from everywhere. That said, the low is a bit anemic for this sort of film. The dialogue is clean and the balance of the pulsating score is handled well.

The only thing included is the theatrical trailer for Sky on Fire and a few other Well Go USA trailers.

This film has all the elements you want in a Hong Kong action film – style, great set pieces, big name stars – they’re just put together poorly with script that needs a page one rewrite. The A/V quality has some flaws, but will still offers reasonable entertainment value.