Star Trek: The Next Generation — Season One Blu-ray Review 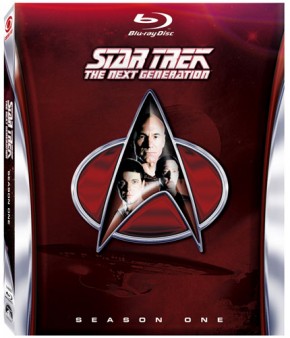 (The Below TheaterByte screen captures are lightly compressed with lossy JPEG at 100% quality setting and are meant as a general representation of the content. They do not fully reveal the capabilities of the Blu-ray format) 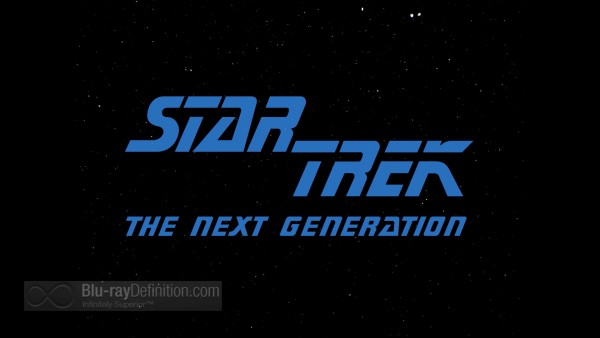 Two decades after Gene Roddenberry’s original 1960s space saga hit the airwaves briefly before going off the air and creating a cult following that would eventually lead to a syndicated empire of re-runs, conventions and motion picture franchises, the series was reborn with Star Trek: The Next Generation. While I can’t claim to be old enough to have grown up with the original Star Trek’s initial run, I was certainly familiar with it from re-runs and did watch it, so I was excited for its return. The Next Generation was indeed Star Trek for my generation; a weekly journey into the 24th century set decades after Captain James Tiberius Kirk and crew boldly went where “no man” had gone before.

A comparison of the new crew of the newly designed Enterprise may be as futile as a showdown with the Borg, but that hasn’t stopped Trekkies from getting into heated debates over the years. While The Next Generation crew are an entity to themselves, there are certainly some similarities in keeping with the Star Trek mythos. Commander William T. Riker (Jonathan Frakes) maintains some of the ladies’ man swagger that belonged to Captain Kirk in the original series. Lt. Commander Data (Brent Spiner) can be seen as the cool, calculating logician who steps into the role of Mr. Spock. It is Captain Jean-Luc Picard (Patrick Stewart) however, that gives the series its real break from the past, offering up a new take on the Starfleet captain. Rather than a brash, shoot from the hip cowboy like Kirk, Picard is a stern, philosophical renaissance man, equally comfortable sipping a cup of Earl Grey and reading the classics as he is brokering the peace on a strange new world or doling out orders in the heat of battle.

Season One of Star Trek: The Next Generation reintroduces us to the familiar world of Star Trek where some things are the same, but some things are slightly different. Each weekly episode, at the time filled with such cutting edge visual effects that all production had to be brought in-house to keep costs down, was well written, tightly crafted, and, as the series played on, loosely woven into an arc that would eventually come to a head. The season introduces many characters and aliens that would influence the stories and crew of the Enterprise throughout its run, including the Q, Data’s malevolent twin brother Lore, the Ferengi, who would have an even larger role in Star Trek: Deep Space Nine, and the Traveler, destined to play a major part in the life of young Wesley Crusher (Will Wheaton). 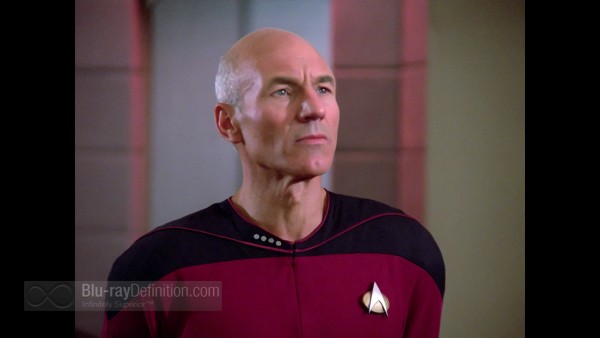 As we all know by now, for The Next Generation releases on Blu-ray, they haven’t just remastered from the existing completed film masters, they have gone back to the original 35mm camera negatives and redone all the visual effects composites – originally done in standard definition – in high definition. What we end up with as a result of this expensive and painstaking process are special effects with much more detail than we have been seeing in syndication for all these years and a superbly film-like presentation. This AVC/MPEG-4 encodement, framed in the original broadcast aspect ratio of 1.33:1, looks great, with a fine grain structure and beautiful colors. Those Starfleet uniforms in their solid primary reds, yellows, and blues look vivid, clothing has strong textural information as does skin. If there are any problems, it is that flesh tones suffer slightly from pushing a bit too much towards a reddish look in certain spots and blacks occasionally wash out a tad while graininess sometimes jumps. These issues, however, are quite small given the overall impressiveness of this excellent restoration. 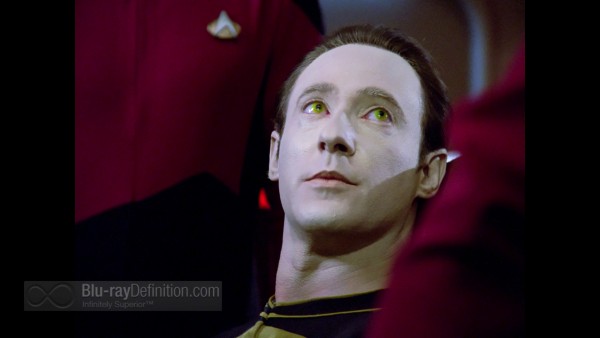 I’d definitely stick with the newly remixed and remastered DTS-HD Master Audio 7.1 (48kHz/24-bit) option if you want the best clarity and dynamics while viewing these episodes. The new mixes aren’t aggressive by any stretch of the imagination, but they offer a wide stereo soundstage across the front with distinct directionality, a nice level of atmospherics in the surround and surround back channels, and occasional discrete effects during more active scenes, like the Enterprise flying overhead or a phaser shooting by. Lows are extended down to somewhere around the upper to mid range of the lower spectrum granting a weighty, but not thunderous sound.

The original English stereo mix, by contrast, is offered only in lossy Dolby Digital 2.0 and while there are some noticeable left/right effects, the soundstage sounds a bit narrower and overall clarity is also a little dull.

It should also be noted that the pilot episode offers the least effective 7.1 mix with terribly balanced reprocessed sound. It might be best to engage the 2.0 mix for that episode unless you like your dialogue panned all the way off to the right. 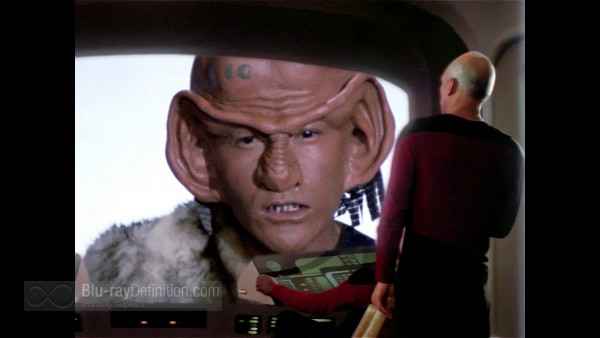 An abundance of extras, but new and archival, fill out this six-disc set and it should keep fans happy and occupied. 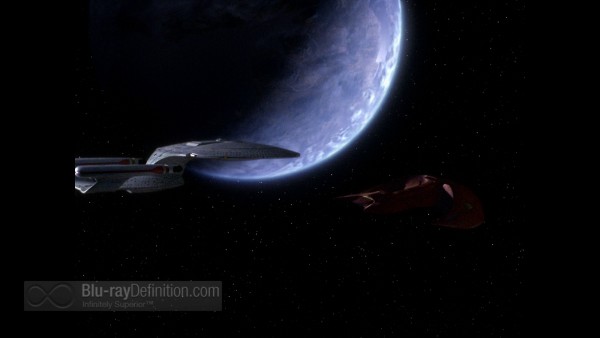 Fans couldn’t have asked for a better opening volley for this classic sci-fi series on Blu-ray. Watching this set is like a whole new experience, with far better clarity than we have been getting for all these years. Well done!

Purchase Star Trek: The Next Generation — Season One on Blu-ray at CD Universe 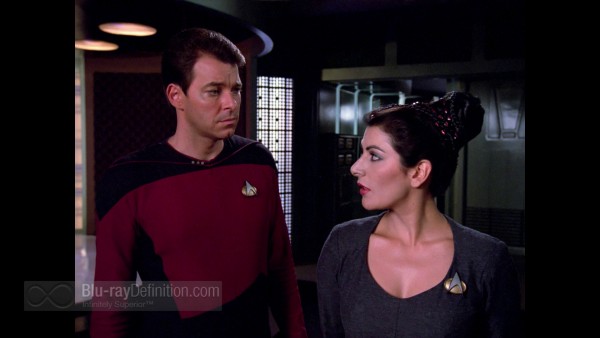 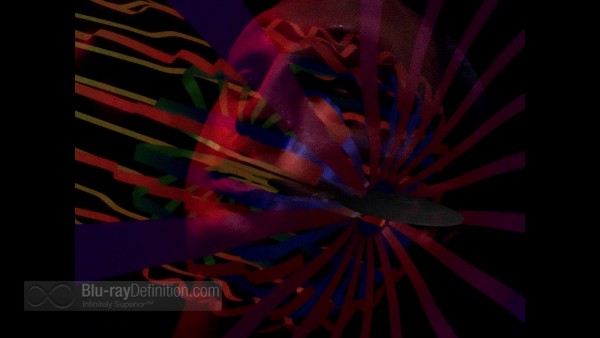 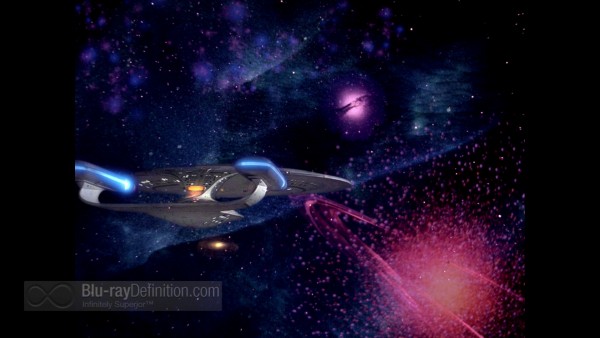 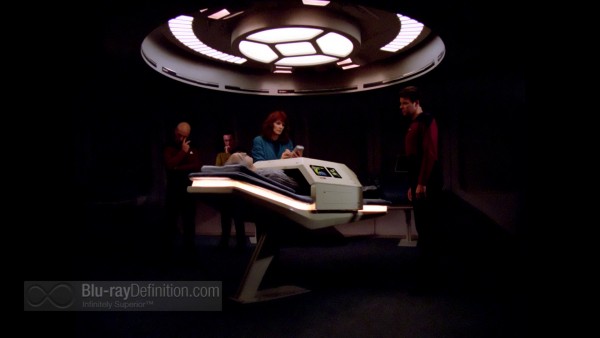 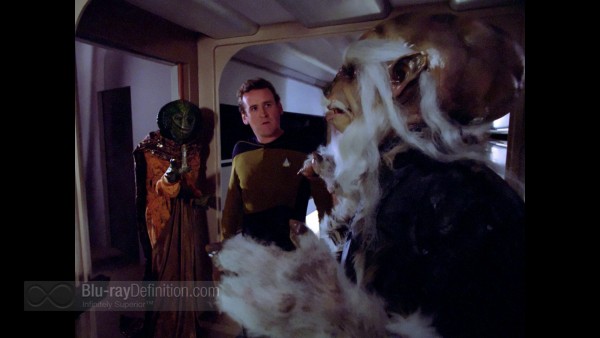 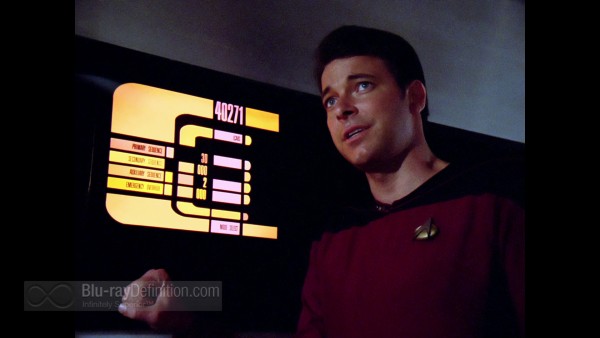 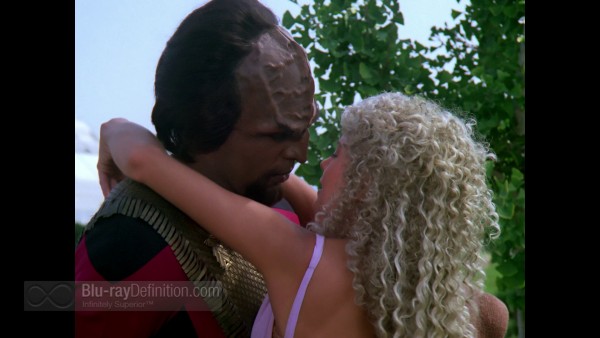 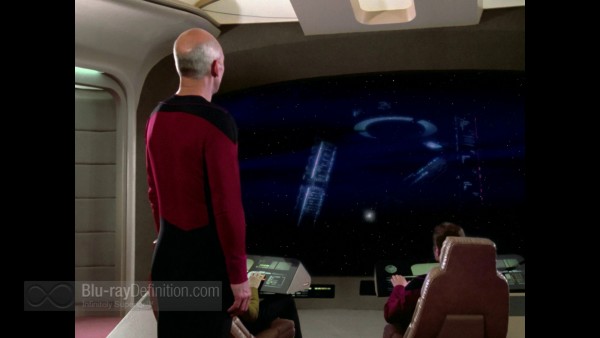 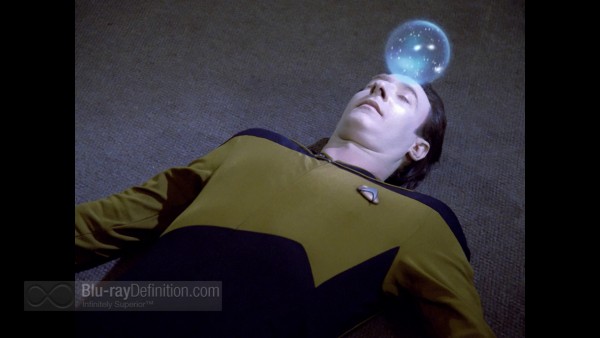 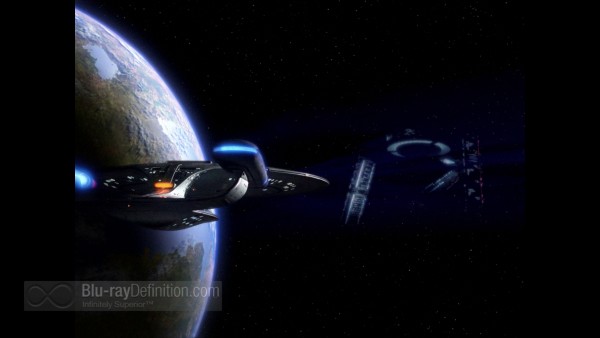 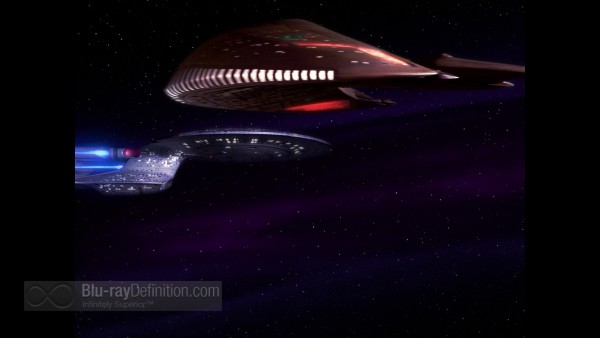 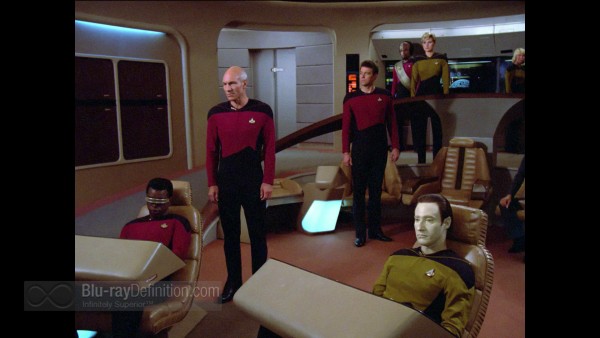 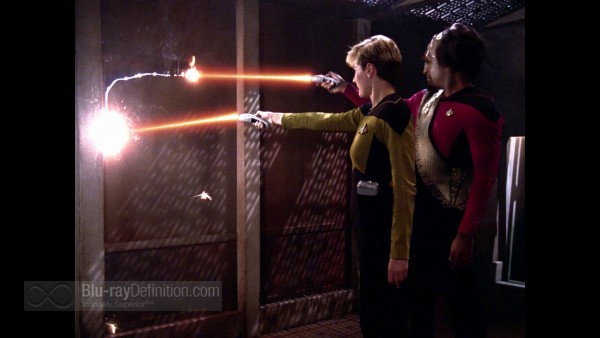 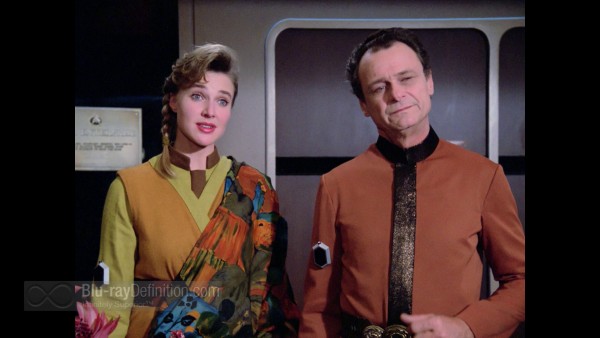 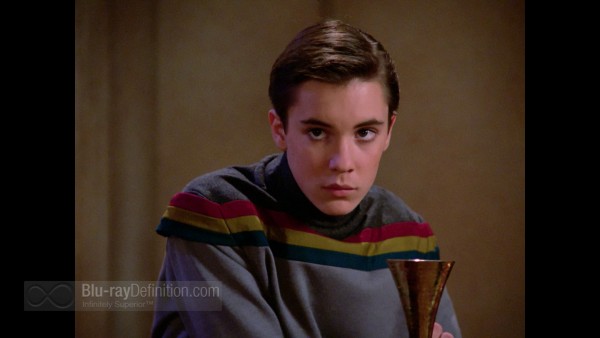 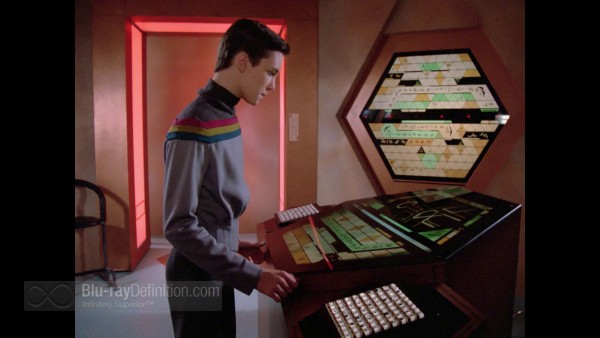 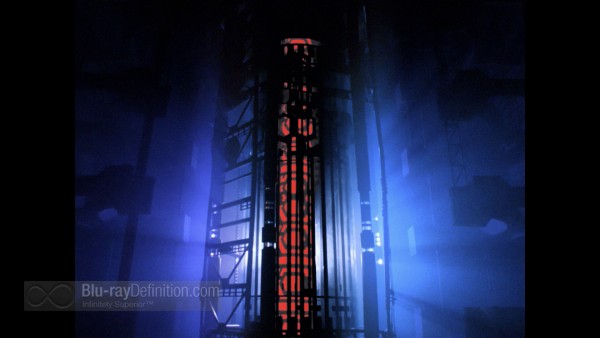 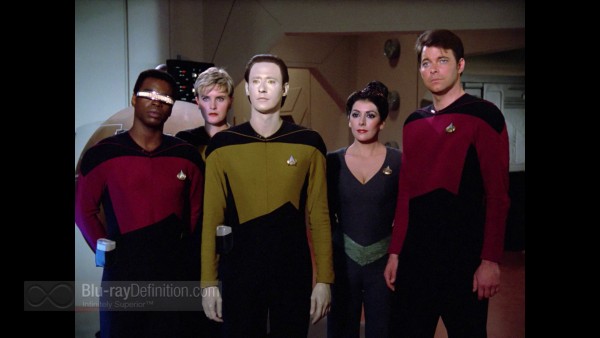 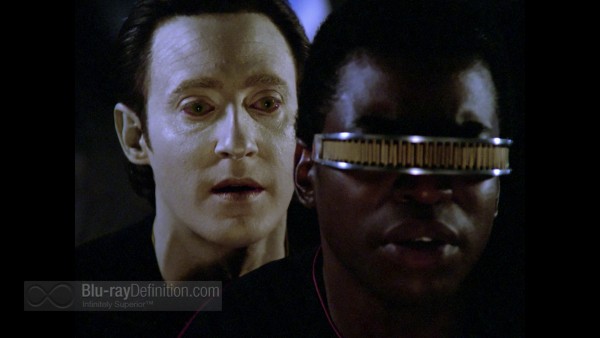 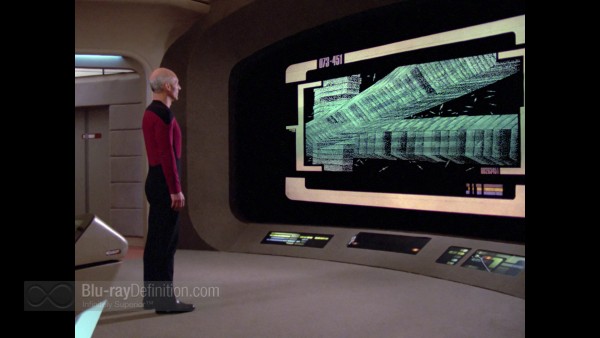 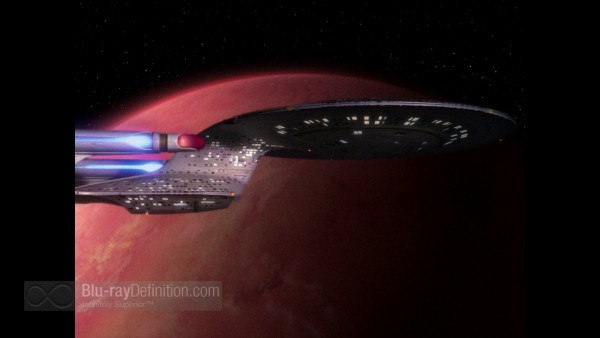 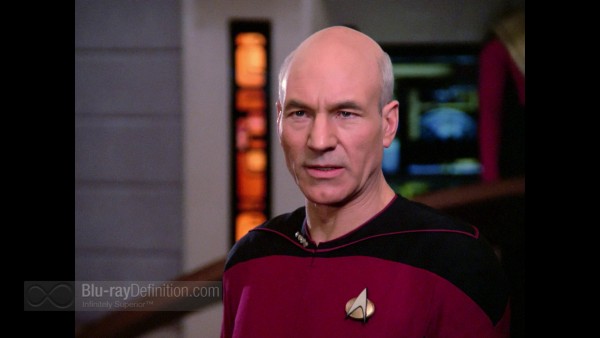 Purchase Star Trek: The Next Generation — Season One on Blu-ray at CD Universe