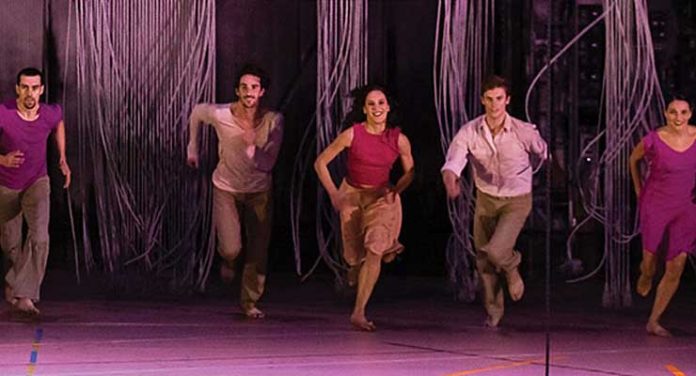 Composer Steve Reich is now considered one of the doyens of contemporary American classical music and his 1976 Music for Eighteen Musicians provides the score for the ballet Rain. The piece uses a cycle of eleven chords that grow and expand until there is resolution and the next section begins. The work is scored for four female voices, variously accompanied by a violin, cello, two clarinets, four pianos, three marimbas, two xylophones, and a metallophone (a motorless vibraphone). Music for Eighteen Musicians’s original playing time has been extended by nearly 20 minutes, not an obvious problem for a “minimalist” composition. 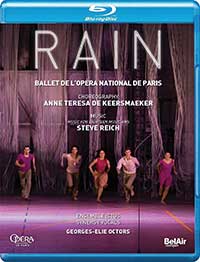 This performance is delivered by the Ensemble Ictus and Synergy Vocals led by Georges-Elie Octors. Belgian choreographer Anne Teresa de Keersmaeker has long been a champion of modern dance and in her numerous works one can see the influences of some of the giants of 20th century ballet, including Georges Balanchine, Pina Bausch, and Jiří Kylián. Throughout her distinguished career, de Keersmaeker has made a point of selecting works for her ballets that were not originally intended for dance but which contain the inherent rhythms upon which dance can be based.

Rain debuted in 2001 and was created for de Keersmaeker’s own company, Rosas. The corps of seven women and three men in this 2014 revival are members of the Ballet de l’Opera National de Paris. Looking back at the inspiration for this work, one need go no further than Reich’s own 1973 Notes on Dance and Music: “What is needed is a genuinely new high art dance with movements natural to the personality of someone living her and now, organized in a clear rhythmic structure, and satisfying the basic desire for regular rhythmic movement that has been and will continue to be the underlying basic impetus for all dance.”

As this ballet unfolds, we see continuous stretches of fluid and natural body movements that appear both spontaneous and yet are clearly connected and coordinated by the choreographer. The occasional overhead shots of a stage set with only a reflective multi-section back curtain illustrate the precision of the dancers whether in solo, pairs or ensembles. The audience can only be astonished by the sheer stamina of the instrumentalists, vocalists, and dancers who get few if any breaks until two minutes before the program’s conclusion. As one who was and still is, 40 years later, bowled over by what was Steve Reich’s most ambitious work at the time, I am even more impressed by how well it suits the world of ballet as realized by this excellent company of players and dancers.

Until about ten minutes from the finish, the stage is bathed in warm roseate light that mutes some of the colors but as the costumes are either mono- or dichromatic, this does little to mar the images or their fine details. Louise Narboni’s cameras keep up quite well with the constantly moving dancers and interrupt the stage action only briefly with cutaways to some of the instrumentalists.

The players and singers are nicely presented in both surround and two-channel versions. While there is relatively little going on in the surround channels, this option is preferable for its broader and deeper soundstage.

The BelAir Classiques program booklet is the usual slim edition that this label provides but, in this instance, we get some very detailed background essays on the ballet, its choreographer and composer, in addition to performance and production credits. 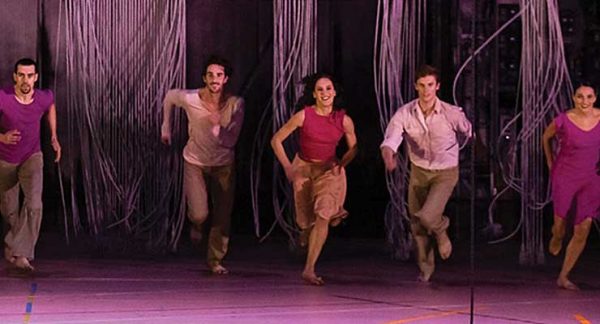 Not all classical music lovers may be fans of the minimalist style espoused by composers like Steve Reich, Philip Glass, and John Adams, but balletomanes will surely be taken by how well it can suit contemporary dance. The insistent quality of the repetitive pulses becomes quasi-hypnotic and really draws viewers into the core of this ballet. I found Rain to be a nice discovery and a very worthy addition to the 21st century dance repertory.