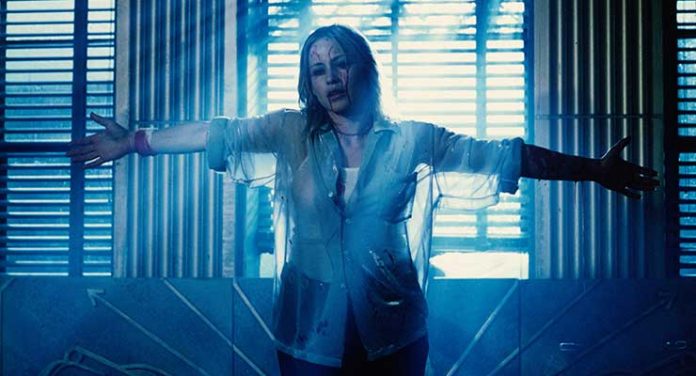 The 1999 religious horror/thriller from director Rupert Wainwright (The Fog) is most notable for its score composed by Smashing Pumpkins frontman Billy Corgan and its much overused imagery of statues crying blood, levitating bodies, and candles burning. At the center of this entire, highly affected atmosphere is the story of Frankie Paige (Patricia Arquette), a Pittsburgh hairdresser and atheist who is suddenly inflicted by stigmata, bleeding wounds on the hands, feet, back and head that mirror those of Jesus at the time of his crucifixion. Corrupt Vatican Cardinal

Cardinal Daniel Houseman (Jonathan Pryce) sends Vatican priest Father Andrew Kiernan (Gabriel Byrne) to investigate, and Kiernan instantly becomes not only concerned for Frankie’s life, but finds himself romantically drawn to her as well. Cue the plot devices about Catholic Church cover-ups, holy relics, secret scrolls, and of course Patricia Arquette channel some sort of malevolent spirit and speaking in a gravely, male voice. If you think you’ve seen this all before, it’s because you have in the much better film that inspired the numerous knock-offs such as this over the years, The Exorcist (1973). There’s maybe some campy fun that can be had from watching this particular iteration of the “exorcist” vein of horror films, but you will definitely enjoy the original far more than what amounts to a tacky, uncredited remake. 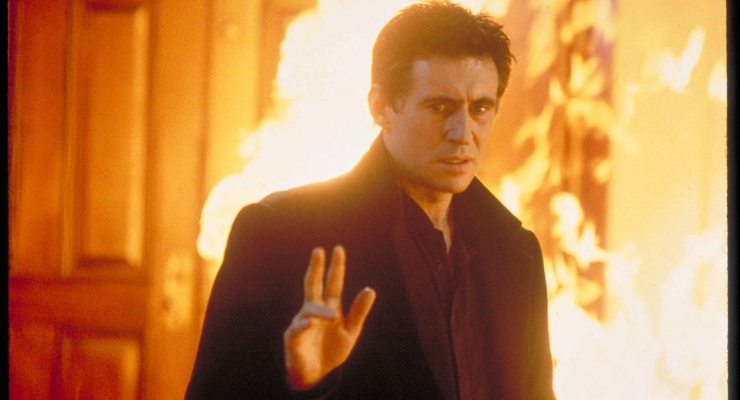 Eureka Entertainment gives us this 1999 film on Blu-ray transferred in 1080p at its original 2.35:1 aspect ratio and encoded in AVC. The production, originally shot on 35mm, shows its age in this release, unfortunately, as one can spot some intermittent instances of specks of dirt and scratches. Those are the minor issues. The image suffers from black crush, white clipping, and also some noticeable edge enhancement around faces and objects. Grain looks a bit rough as well and colors tend to be a little oversaturated.

There is a DTS-HD Master Audio 5.1 mix alongside a LPCM 2.0 stereo track included on the disc. An isolated music and effects track is also included. The 5.1 track is decent when it works, meaning when the sound picks up in some of the more active sequences, it is very atmospheric and sounds are spread nicely around the room. There is also good balance and natural dynamics. However, the mix tends to go dead and dry a lot and there are some effects where there could have been a lot more done, for instance, when a dove suddenly flies into Rickie’s apartment, the loud sound effect fills the front channels, but the surround channels don’t do much at all. This is a missed opportunity for some directionality and discrete use of the surround field. That said, the dialogue and music sound natural and are balance well.

Eureka includes a number of ported over SD behind-the-scenes featurettes as well as an audio commentary from director Rupert Wainwright and the original theatrical trailer. One can also watch the film with the isolated music and effects track selected, which emphasizes just how campy the film can get.

Stigmata is one of those strange films that has a lot of atmosphere, a recycled plot, looks really good from a production standpoint, but leaves you wondering how all these fine actors allowed themselves to be inveigled in such a hot mess. It may work in the festive atmosphere of a Halloween horror film marathon, but as a standalone work, Stigmata is forgettable.