Warner Bros. animation arm tries to continue the success of its The Lego Movie with Storks bringing in director the unusual choice of director Nicholas Stoller (Forgetting Sarah Marshall) to helm the production. The resulting film is a wacky, sometimes incomprehensible film that manages to stay afloat through sheer will, remarkable voice casting, and admittedly lighthearted charm that will appeal to all ages.

When a rambunctious youngster named Nate Gardner (voiced by Anton Starkman), lonely being an only child whose two workaholic parents can’t seem to find enough time to spend with him sends a letter off to the storks asking them to send him a baby brother, it sets off a wild chain of events. The storks have been out of the baby delivering business for years and are now running a lucrative business making package deliveries for a major Internet retailer. Back on Stork Mountain, the nearly all-stork company, overseen by the boss Hunter (voiced by the perfectly cast Kelsey Grammer) wants no part of delivering babies ever again and is proud of his achievement transitioning the birds to their new, thriving business. There’s just one problem and that is their sole human employee, the orphan Tulip (voiced by Katie Crown). Katie is there because of a taboo incident that occurred years before with a stork that became too attached to her during her delivery, and her real parents; address was lost.

The well-meaning, but klutzy Katie who wants to help out so much cuts into their profits. Hunter, who’s moving on to an even higher position, promotes the brown-nosing stork Junior (Andy Samberg), to “liberate” Katie from the company, but Junior can’t bring himself to do it, so instead he sticks her in the long shutdown mail room. There, Katie receives the letter from Nate and sends it off to the shut down but still functional baby making factory. Out pops a brand new baby girl who Junior and Katie now have to keep hidden and deliver on their own lest they create major trouble for themselves and the storks. They find themselves out on their own, on the run from a pack of wolves who fall in love with the baby (comedy duo Keegan-Michael Key and Jordan Peele voice the Alpha and Beta wolves and provide some of the film’s best comedy), and trying to avoid a nosy stool-pigeon with a seriously deep California beach bum accent (Stephen Kramer Glickman).

While Storks does find itself all over the map script-wise, in an almost hectic, haphazard way, it does do some things well, and that is craft a family friendly film that is not unbearably saccharine. Unlike The Secret Life of Pets, which I felt had bit too much age-inappropriate material to be truly a full-family film, this one is truly all-inclusive. And the comedic match-ups are golden. Samberg is equally neurotic, witty and insecure and the chemistry between him and Katie Crown is palpable. Key and Peele undeniably steal the film with their goofy repartee, especially the first scene where they fall in love with the baby. Also, the choice of Kelsey Grammer as the coldhearted corporate shill is pure genius. His voice just suits the role. 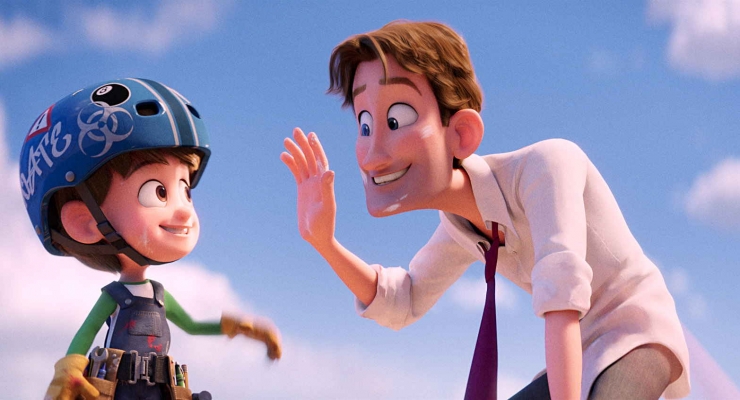 I was unimpressed with the first 3DCG-animated film I had the chance to view on 4K Ultra HD, The Secret Life of Pets. While I am still unconvinced that this purely digital format originally intended for 3D best benefits from any 2D format (a Blu-ray 3D release is also available and the film was also released to theaters in 3D where available), this 4K Ultra HD release of Storks is much more impressive than Pets. It arrives in the usual HEVC 2160p encodement at its 2.40:1 framing and it looks stunning, to say the least. There is a decidedly more textured and filmic appearance to this image than there was in Pets, which really looked no better than the usual, pristine digital image one normally sees in these productions on Blu-ray. Apparently there was some artificial “grain” added to this image and it really does help to add some dimensionality. Beside that, the HDR (High Dynamic Range) mastering looks staggeringly gorgeous on this. The colors are so vibrant and the contrast just splendid. The shadows get so dark and inky while, in the same scenes, we see brilliant bright colors. A perfect example of this would be when Junior and Tulip are captured in the wolves’ den. While I am still not a full convert to 3DCG animation on 4K Ultra HD, I can full heartedly recommend this title for those 3D haters who love the genre and say, yes, it’s a big step up over the Blu-ray.

A DTS-HD Master Audio 7.1 mix is provided for Storks, so no Atmos or DTS:X for this one. Never mind that, however, because this mix offers a richly balanced and aggressively mixed soundstage with extended low-end, plenty of solid effects placed around the room, excellent atmosphere and clean dialogue.

The standout extras here are the audio commentary, which is on both discs, and the LEGO Ninjago short. The Outtakes are mildly amusing and the Storks: Guide to Your New Baby allows another brief chance to see the characters from the film again.

While Storks does hit all the basics of a family film like parents should pay attention to their kids, babies are cute, bonding with your friends, and that sort of thing, it is mostly just a collection of witty gags that has no tight story arc. That said, it is a funny and enjoyable film that the whole family will not have too many problems sitting through apart from one or two lulls in the action. The 4K Ultra HD disc looks superb and will be a good choice if 3D is not your thing.