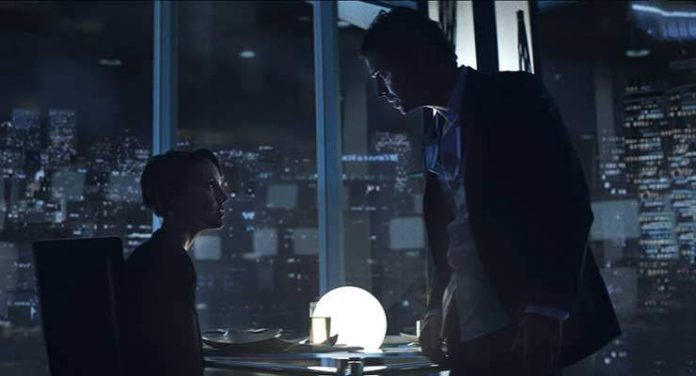 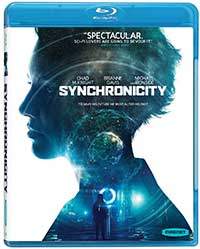 Indie writer/director Jacob Gentry (Last Goodbye) gives us his first feature film entry since 2007’s The Signal with this genre mixing sci-fi noir thriller, Synchronicity. Revolving around a quantum physicist, Jim Beale (Chad McKnight) who invents a time machine and must travel back in time to save both his life and his invention from a sexy femme fatale named Abby (Brianne Davis), who may not be what Jim thinks she is, the film is awash in style and throwback ‘80s references. The overriding allusion that any sci-fi fan will notice in

Synchronicity is its references to Blade Runner, both in its visual style – the film is set in a stark, almost post-apocalyptic landscape where shimmering skyscrapers mingle with barren cement structures – and in its noir-ish love story between Jim and Abby. The musical score from Ben Lovett also obviously owes a major debt to the new age score from Vangelis with its ringing keyboards chiming out like sirens in melancholic and chilling tones. That said, the screenplay from Jacob Gentry, which is somewhat convoluted in its mixture of romance, time travel and parallel dimensions, is undercut by his own refusal as a director to stay out-of-the-way. The film looks great, that undeniable, but we have a case here of style over substance. There’s a lot of atmosphere that makes you look on in awe. The score is almost too intrusive at times and used too often to set the mood more than the dialogue and the actors’ performances. The final act of the film breaks down like most time travel fiction does with a perplexing paradox that resolves in a way that seems out of thin air given everything else that transpired.

Synchronicity was shot in HD on the Arri Alexa with Hawk anamorphic lenses and given its small budget, the most is made out of it. It looks very good, with only the slightest hints of banding in the image and perhaps what aren’t always the deepest blacks in this AVC 1080p encodement. Some of the visual effects tend to look a little soft as well, but that is not necessarily an issue with the transfer either. Flesh tones look good and detail is generally crisp in skin and clothing. Colors are purposely denatured, but we do get a pretty good sense of nuance in the shadows in what is a generally darkly lit film.

The sound, offered up in DTS-HD Master Audio 5.1, is very lush and atmospheric with a lot of little foley effects

and that moody new age score tends to engulf you, however the dialogue remains upfront and clear and the dynamics are pretty wide as well.

The director’s commentary is the only extra worth sitting through. Everything else is just EPK-style material with little information offered.

Synchronicity isn’t the strongest sci-fi film out there, but its style and blend of genres offer a unique blend of styles for sci-fi lovers that they are sure to some pleasure in. The theoretical part of the film (i.e. the science) is its weakest component, but the noir, the cool visuals and decent performances make it a good slow weekend time waster for genre fans.