In 1993 director Martin Scorsese tackled the period costume drama — a cinematic genre that was probably still closely associated with Merchant-Ivory productions at that point – with his adaptation of Edith Wharton’s The Age of Innocence.

The story is set against the backdrop of New York City’s elite families during the 19th century, the story follows the star-crossed love affair of successful attorney and conformist Newland Archer (Daniel Day-Lewis) who falls in love with the beautiful Countess Ellen Ollenska (Michelle Pfeiffer), while he is engaged to her younger cousin May Welland (Winona Ryder).

Ellen returns to New York City after many years away running away from a disastrous marriage to European royalty with a murky and scandalous past that leaves her on the outs with the prudish New York City upper echelons. Knowing each other from their childhoods, Newland and Ellen are drawn to each other when they meet during a night out at the opera – Newland attracted to Ellen’s independence and Ellen attracted perhaps to Newland’s familiarity and rigor. When Ellen decides to try to file for divorce, Newland’s law firm assigns him to her case, not to help her resolve the divorce, but more to try to convince her to drop the suit based on a letter sent from her husband detailing unconfirmed but salacious details of Ellen and her male secretary that would ruin her reputation and the reputation of the Welland family. Newland and Ellen grow closer, but all the while they know that society will never allow them to be together.

Scorsese’s film is lavish affair that is meticulous in its period detail as set forth by the writings of Edith Wharton.  The costumes, wilderness of the northern parts of Manhattan all evoke the era in minute detail that hint at the level of detail that Scorsese would return to for Gangs of New York with a grittier tone.

The film is only hampered by its recurrent narration and a final act that is rushed and overly saccharine in summing up the ultimate resolution of the saga of Ellen and Newland. The acting, however, is superb for the most part, with Pfeiffer perhaps besting Day-Lewis whose stiffness and less-than-perfect New York accent make him seem just slightly awkward and not quite the charmer he was aiming for. 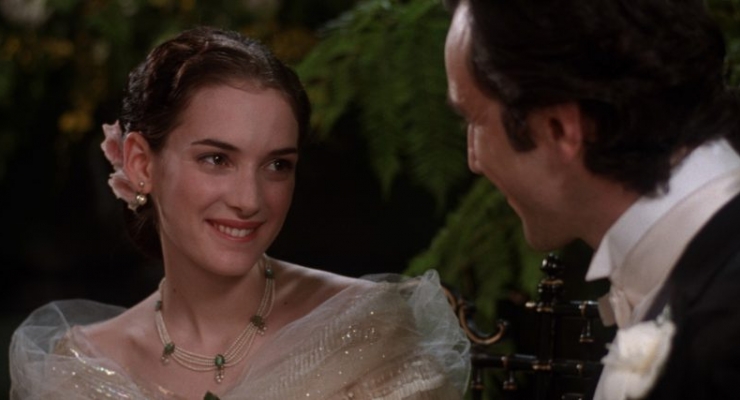 This new digital transfer of The Age of Innocence was done in 4K resolution on a wet-gate Oxberry film scanner from the 35mm original camera negative at Cineric in New York City. The color grading, approved by director Martin Scorsese and editor Thelma Schoonmaker, was done at Soy Color Works in Culver City, California. The transfer arrives on Blu-ray from the Criterion Collection in its original 2.40:1 framing in an AVC 1080p encodement. What we get from the opening credit sequence and opening act is one of brilliant, vivid primary colors that aren’t over-saturated, but have good ‘pop’ especially the blues, reds, and yellows. The shadow detail is good as well with only the slightest hint of some crush that can be seen in lapels on men’s suits, but it’s hardly enough to take away from the excellent detail and filmic appearance and natural grain structure.

The Age of Innocence originally had a stereo soundtrack, but this director-approved 5.1 soundtrack comes to Blu-ray remastered by Sony from the original six-track printmaster at Chace Audio in Burbank, California. There isn’t much going on in the surround channels, but the classically influenced score has lots of headroom and the dialogue is clear.

Criterion fills this disc with a collection of new interviews and an excellent essay. All of them are worth taking a look at and reading through.

A pleasing period costume romance, this gorgeous new restoration overseen by Martin Scorsese and reissued on Blu-ray by the Criterion Collection is a must-own release for cinephiles and a true reference quality edition.

The Age of Innocence is out on Blu-ray and DVD from the Criterion Collection March 13, 2018

4 / 5 TheaterByte Rating
{{ reviewsOverall }} / 5 User Rating (0 votes)
PG (for thematic elements and some mild language)Rating Certificate
Columbia Pictures Corporation | Cappa Production | The Criterion CollectionStudios & Distributors
Martin ScorseseDirector
Edith Wharton (novel) | Jay Cocks (screenplay) | Martin Scorsese (screenplay)Writer
138 Mins.Run Time
$39.95MSRP
13 Mar. 2018Release Date
2.40:1Aspect Ratio
AVC 1080pVideo
English DTS-HD MA 5.1Audio
English SDHSubtitles
The Creative Content
The Video
The Audio
The Supplements
Summary
In 19th century New York City, a successful attorney (Daniel Day Lewis) falls in love with the cousin (Michelle Pfeiffer) of his fiancee (Winona Ryder) when she returns to the city fleeing a marriage to a European aristocrat. The two rekindle a relationship from their childhood, but they run into the oppressive mores of the elite New York society and find themselves trapped in their circumstances, unable to fulfill their love. A lavish and meticulously crafted film with a top notch cast, The Age of Innocence is a pleasing period romance that is hampered by its clumsy narration and rushed final act. The Criterion Collection give the film a beautiful new 4K restoration on Blu-ray overseen by director martin Scorsese.
What people say... Login to rate
Order by: