The Big Bad Fox and Other Tales (Blu-ray Review) 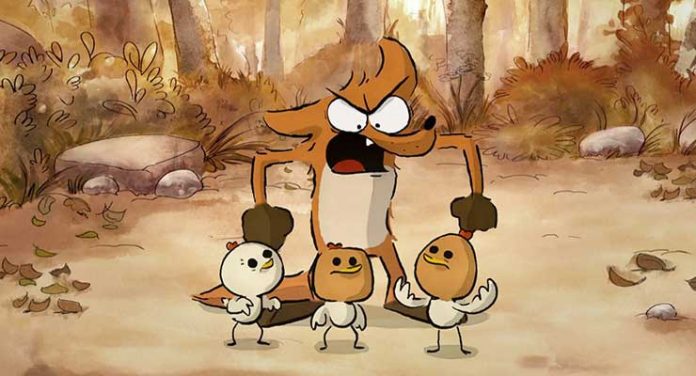 From the creators of the Oscar-nominated Ernest & Celestine comes The Big Bad Fox and Other Tales. This innocent, fun-for-the-whole-family romp has the same visual animation style as its predecessor and also follows many of the same themes of misfits and finding friendships and family where one least expects. Set as a story within a story about a group of farm animals staging a play, the story is a triptych of interrelated stories based of co-director Benjamin Renner’s own graphic novel. The first story follows a group of farm animals who get together to literally deliver a baby when the stork decides to take the day off, and an action-packed eventful day ensues as a pig, duck, and dog try to fill in. The centerpiece story centers around a fox who can’t seem to frighten any of the hens in the henhouse and get anything to eat but turnips, so his friend the big bad wolf convinces him to steal some chicks and raise them, making them easy prey. What really happens is he becomes attached to the three chicks who imprint on him as their mother and they start believing they are foxes. The final story finds a duck wanting to be Santa Claus at Christmastime.

The story in this film is not quite as coherent and satisfying as the nearly perfect Ernest & Celestine, but there is hardly anything to find fault with in this feelgood animated adventure. The English version of this original French production features a cast of voices from the world of British comedy, including Bill Bailey, Adrian Edmonson, Justin Edwards, Matthew Goode, Celia Imrie, Phill Jupitus, and Giles New. 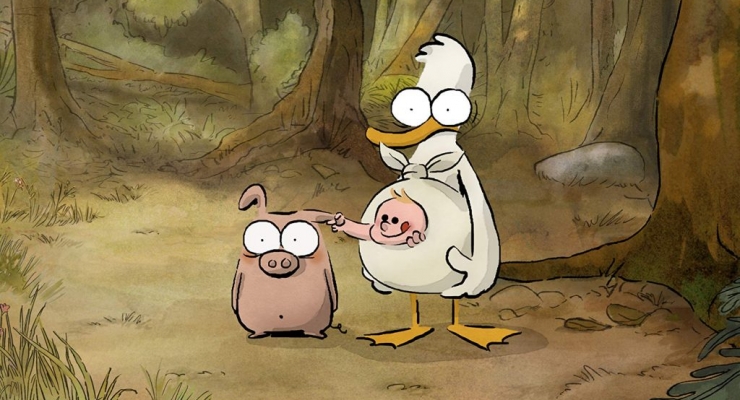 The Big Bad Fox and Other Tales hits Blu-ray in a 1.77:1 AVC 1080p encodement of its digital animation and it looks beautiful, like a storybook come to life, with wonderful detail, texture, and vibrant but not overly saturated color.

The film comes with the original French-language soundtrack in DTS-HD Master Audio 5.1 and an English dub in DTS-HD Master Audio 5.1. While not as aggressively mixed as one would expect for an animated film such as this, there are good dynamics, clear dialogue, and a good bit of atmospherics put to use in the surround channels with the occasional solid sound effect as well. Stereo imagery is wide across the front, but low-end extension is mild at best.

They include an excellent set of interviews with the directors, English voice cast and others on this disc.

A delightful animated adventure that is heartfelt, funny, with not a dull moment that should be in your collection if you have kids or even if you don’t and you just love animation.

The Big Bad Fox and Other Tales is out on Blu-ray July 16, 2019 from GKIDS/Shout! Factory