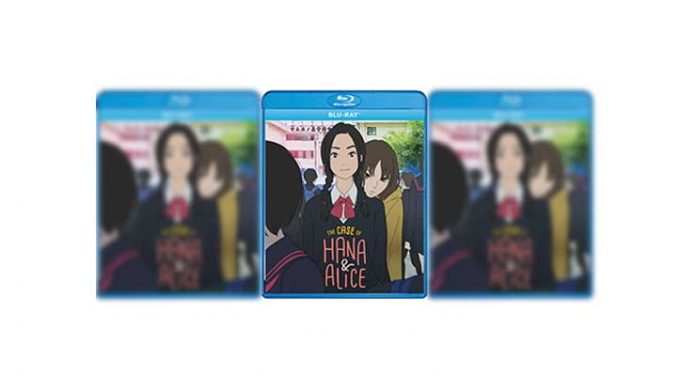 The Case of Hana & Alice is Iwai Shunji’s prequel to his 2004 live-action film Hana & Alice. This rotoscoped coming of age anime adventure follows the story of Arisugawa “Alice” Tetsuko who moves into the neighborhood of Fujiko with her divorced mom.

When Alice moves into Fujiko, she notices a strange girl in the house next door spying on her through the blinds. She also becomes a transfer student at her new school where a strange story about a previous student that was there before her permeates amongst the students. The story goes that the evil spirit of a previous student named an evil spirit named Judas who had “four wives” haunts their classroom and because Alice sat at his desk, a strange girl named Mutsumi Mutsu accuses her of releasing the evil spirit. But there is more to the story and she finds out when she approaches Hana one afternoon.

Hana has been a shut-in since the previous year and missing classes. Alice decides one afternoon to visit her when she finds old tests from her school with the name “Yuda Kotaro” which she realizes is the “Judas” from the story the kids at school are telling, and that another name, Hana, is the same Hana that lives next door to her. She sneaks into Hana’s house and the two begin a sort of friendship, but Hana tells Alice that Yuda may or may not be alive and that they have to find out. The two schoolgirls launch an “undercover” investigation to try to find Yuda, first by trying to trail his father, but their attempts go comically awry, which leads them to a very long night of adventures, revelations, and personal growth.

The animation is not to be ignored in this production. While the characters are rotoscoped, which isn’t particularly my favorite technique for animation as it often tends to look flat and lacking in detail to my eyes, the backgrounds and artwork in this film are often breathtaking and full of rich colors and often multidimensional detail or sometimes like a lovely watercolor backdrop.

On the surface, The Case of Hana & Alice is a slice-of-life comedy, but looking deeper and Iwai Shunji, who not only directs, but writes and provides the musical score for the film, gives us a coming of age story about two teenage girls who are learning to come to terms with the consequences of their actions while also developing a deep friendship with a new acquaintance, working out the subtleties of each other’s idiosyncrasies. There is excellent character development across the film’s engaging and often surprising story arc, with an easy mix of comedy, teen drama, and mystery.

The Case of Hana & Alice comes to Blu-ray with a beautiful AVC 1080p encodement framed at 1.77:1 that is crystal clear, full of crisp detail, rich colors that aren’t oversaturated, and no noise, banding, or motion artifacts.

The Case of Hana & Alice come only with the original Japanese audio mix in DTS-HD Master Audio 5.1, there’s no English dub, but English and Spanish subtitles are provided. There aren’t very many solid discrete effects panned through the surround channels, but the mix is full of wonderful atmospherics, clear dialogue that is often mixed with lots of ‘natural’ area ambience, such as when Hana and Mutsumi  Mutsu are speaking with each other in school and you can hear the reverberation of the empty classroom. The dynamic range is rather wide and low end is nice and deep, although hardly floorboard rattling.

We get an excellent selection of interviews and Q&As with the cast and crew, plus the usual trailers and TV spots.

This is a wonderful, heartwarming film that avoids the traps of overt sentimentality and delivers a burst of brilliant animation and a gripping story. The Blu-ray from Shout! & GKIDS is a beautiful reference quality release with a strong collection of interviews as bonus features.

The Case of Hana & Alice is out on Blu-ray September 17, 2019 from Shout! Factory/GKIDS

4.3 / 5 TheaterByte Rating
{{ reviewsOverall }} / 5 User Rating (0 votes)
Rockwell Eyes | Stephen StephenAnimation Studio
Shout! Factory | GKIDSDistributor
Iwai ShunjiDirector
Iwai ShunjiWriter
99 Mins.Run Time
17 September 2019Release Date
$26.99MSRP
1.77:1Aspect Ratio
AVC 1080pVideo
Japanese DTS-HD MA 5.1Audio
English | SpanishSubtitles
The Animation
The Story
The Video
The Audio
The Supplements
Summary
Alice moves into a new house with her recently divorced mother and becomes a transfer student in her new school where a strange rumor about a previous student persists. Her investigations lead her to meet Hana, the girl next door to her who has been living as a shut-in and together the two of them go on an often calamitous yet revelatory adventure to find the truth. A wonderful, heartfelt, rotoscoped anime feature film that is issued here in a gorgeous Blu-ray transfer from Shout! Factory/GKIDS.
What people say... Login to rate
Order by: