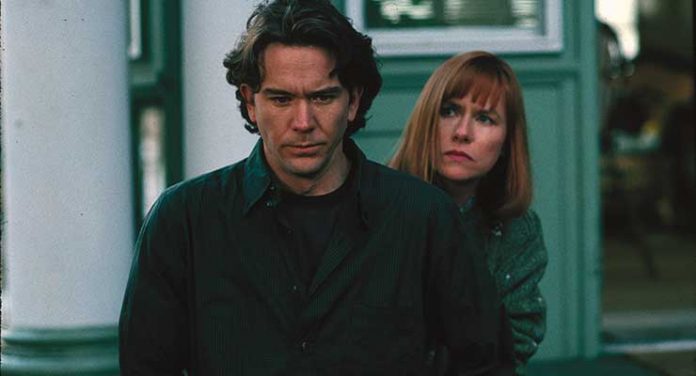 The Dark Half is a 1993 horror/thriller from director George A. Romero (Night of the Living Dead) based on the novel by Stephen King. Bringing together two living horror legends should on paper yield something magical, and the film certainly has some flashes of brilliance, but there seem to be an equal amount of disappointing moments in what basically amounts to a B-horror cult film.

Timothy Hutton plays Thad Beaumont who becomes a popular writer on the college circuit but is financially successful because of writing cheesy pulp fiction novels under the pseudonym “George Stark,” but when the truth comes out, he decides to kill off his alter-ego in a mock funeral ceremony. Soon a series of hideous murders of people connected to Thad begin to occur – murders that mirror those in his pulp novels – and the suspect resembles a low class, bulkier, and scary version of Thad. He begins to suspect that the killer may be his doppelganger, his alter-ego George Stark (also Hutton) come to life, not wanting to die so easily, but Thad soon becomes the primary suspect in the series of crimes.

Romero manages to craft an atmospheric film that is at times reminiscent of Hitchcock and other times taken directly from the B-horror of the 1980s, such as Re-Animator as can be seen in the practical visual effects, often as gruesome as they are laughably dated.  Timothy Hutton is superb in his role as the violent George Stark, but terribly bland as the successful family man and author Beaumont, while Amy Madigan is underutilized to the extreme as Thad’s wife, only getting to flex her acting chops as the eventual – and terribly cliché horror trope – damsel in distress.

The Dark Half is no classic, but there are some moments of true thrills, some honest jumps, and a few unlikely twists to keep viewers on their toes. Romero keeps the pace steady if a little slow, but not slow enough to get one thinking too hard about the unlikely plot. 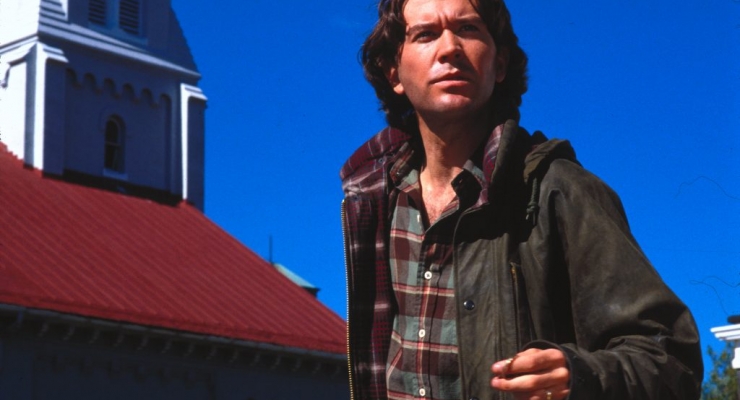 Eureka provides the film in a 1.85:1 AVC 1080p encodement. The transfer doesn’t seem to be taken from a new restoration, Eureka doesn’t label it as such anywhere, nor does it look like one. From the early title sequences, it looks a bit rough with some noticeable source damage here and there and while it does clean up a bit, there is still some film softness and often graininess and washout in some shadows. The colors look excellent however, and I didn’t see any noticeable compression noise or edge enhancement.

The Dark Half comes with a LPCM 2.0 stereo mix and a remixed DTS-HD Master Audio 5.1 mix. While the stereo mix is a little more authentic, the 5.1 mix offers a little more clarity with some good atmospherics and sound effects in the surround channels and slightly more dynamic range, but both mixes suffer from dialogue that often drops a bit too low to understand, and that’s in a film that is dialogue-driven. The 5.1 mix provides a little fuller sound to the dialogue, which remains mixed into the center channel, but it still drops too low at times.

There are no real new bonus features here; although there are separate “archival” materials included, they could all be considered as such. That said, the ‘making ofs’ and interviews remain interesting viewing and the audio commentary with Romero, which is more of a friendly interview over the film is also pleasant to listen to, but not one of the more detailed commentaries I’ve ever heard.

Although one of the lesser Stephen King adaptations and Romero films, this one still has a few moments visually and dramatically that save it from being irredeemable and this Eureka Classics release is just good enough to entice genre fans and fans of these two horror legends who may like to own it.