Stanley Kramer’s 1958 film The Defiant Ones has been a big part of the American culture practically since its release. The film dealt with the big issue of racial animus between blacks and whites during the height of the Civil Rights era.

The story follows two convicts on the run, one white, John “Joker” Jackson (Tony Curtis; The Vikings, Some Like it Hot) and one black, Noah Cullen (Sydney Poitier; Guess Who’s Coming to Dinner, In the Heat of the Night). Escaping from a Southern chain gang, the two men who hate each other, find themselves on the run and bound together by an unbreakable chain. Pursued by bloodhounds and a posse of lawmen out to get them dead or alive, and coming across a mixture of characters suspicious of them both for being escapees and because of Noah’s race. The two of them must somehow put aside their hatred towards each other in order to maintain their escape.

The film is noted for its gorgeous noir visual, kinetic, energetic pace, and even according to Kim Newman (see the video interview on this release), the homo-erotic subtext that somehow went unnoticed by the buttoned-up film critics of the late 1950s.

The Defiant Ones’ thematic content has influenced a number of films that have followed, some with less dramatic flair as the original, and some more exploitative, such as the Pam Grier vehicle Black Mama, White Mama. None has been quite as enduring as the original. 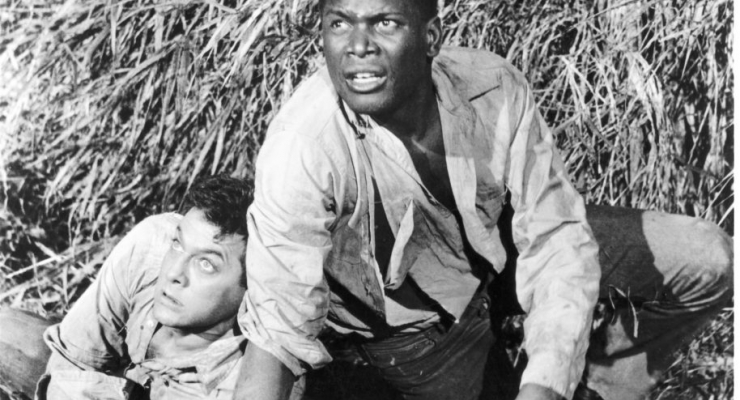 This Eureka Classics edition of The Defiant Ones arrives in its original 1.66:1 aspect ratio in an AVC 1080p encodement of its stark black and white imagery. The master provided does have some rough patches and shows some film softness, but for the most part, we get a good, solidly satisfying presentation with a good amount of detail, little source damage and fine contrast.

The original monaural soundtrack for The Defiant Ones comes on this Blu-ray in LPCM 2.0. Being from 1958, the sound is limited by the techniques of the time and doesn’t have vast dynamic range or booming lows, but it has clear enough dialogue and clarity of sound effects is good enough.

The Defiant Ones is not packed with special features by any stretch of the imagination, but the over 19-minute-long video interview with film critic Kim Newman is a must watch.

This film never gets old. Both actors seem out of character, with Tony Curtis reaching that point in his career where he was trying to break out of his pretty boy image and take on meatier roles and Sydney Poitier not yet settled into his roles as the refined, black gentleman. They both do excellent jobs along one another in a film that is at times a bit on the nose, but still no less enjoyable. This Eureka Classic edition is a fine version on Blu-ray for film enthusiasts.

3.3 / 5 TheaterByte Rating
{{ reviewsOverall }} / 5 User Rating (0 votes)
UK:URating Certificate
Curtleigh Productions | Stanley Kramer Productions | Eureka EntertainmentStudios & Distributors
Stanley KramerDirector
Nedrick Young | Harold Jacob SmithWriter
96 Mins.Run Time
£17.99MSRP
11 Jun. 2018Release Date
1.66:1Aspect Ratio
AVC 1080pVideo
English LPCM 2.0 MonoAudio
English SDHSubtitles
The Creative Content
The Video
The Audio
The Supplements
Summary
Two runaway cons, one black (Sydney Poitier) and one white (Tony Curtis), escape a Southern chain gang while chained together and must overcome their hatred for one another to survive. This 1958 film from director Stanley Kramer is noted for its visuals and kinetic energy, but can be a bit on-the-nose with its social commentary. Still, it has become am enduring classic that is offered up in a pleasing presentation in this Eureka Classics edition.
What people say... Login to rate
Order by: